i think i need a bit of clarification.

are the patterns supposed to randomly start playing again on their own even when i have stopped the master MIDI clock for everything?

and just revisiting (or i’m just being a squeaky wheel) an old request.

would it be possible to have CC2 randomly choose what bank it is recording to on it’s own?
i really have run into a crazy time trying to feed nine banks of CC2 simultaneously.

are the patterns supposed to randomly start playing again on their own even when i have stopped the master MIDI clock for everything?

no, but I could use some additional repro steps – feel free to DM! it’d be helpful to know:

i really have run into a crazy time trying to feed nine banks of CC2 simultaneously.

oh man, i almost forgot about your three simul-sessions lol

rnd will include a live segment switcher, just need to get through this UI tweak sprint

i’m working on setting up my 16n as a way to control performative parameters. maybe i’m being dense, but i can’t seem to find a way to map arp speed to a midi controller. is that surfaced somewhere? thought i was pretty thorough looking through the param mapping. my idea is to break out each bank into a set of 4 faders to control just friends, and use the last 4 as CV or global params. so far, i have octave mapped to the first of each set, then i’d like to get arp rate, and probably direction, once i can figure out where those params are hiding. anyone have any suggestions for the last one per bank?

good call! i can add these to params:

hang tight! should be able to push 'em out in the next day or two

I got cheat codes 2 working with Push 2 and it works great. I’m loving this script but I’m a noob to it. Is there a way I can make the push light up with visual feedback? Every button works as it should but no lights on the push.

stoked to hear you’re digging in!

are you using Midigrid: use launchpads and other midi grid controllers with Norns to communicate between the script and your Push 2? that’s the only way to get visual feedback – it’ll replicate the 64 grid on the Push 2.

if you are already using this, does the Push 2 light up with other scripts?

happy to help with more info!

Yes I got midigrid installed and it lights up with Awake, arcologies, initenere, and I’m still going through other scripts to see what works. Most scripts work but some have no visual feedback. I have it set to 4-step and 64 grid but I have tried varibrightand grayscale and those don’t light up either. Thank you for this script and helping out.

hmm. i’m not able to repro any issues on my side:

then i navigate to PARAMETERS > EDIT > GRID and i toggle midigrid? to yes and my Push automatically lights up. if it doesn’t a quick restart of the script (your midigrid settings will persist) should get it going.

let me know how it goes!

Dude! You’re so awesome! Thank you for everything. I’ll have a grid once they are back in stock too but in the meantime I really appreciate it and you. Amazing script and I’m looking forward to any future scripts you create!

thank you for the kind words! you got up and running, then? 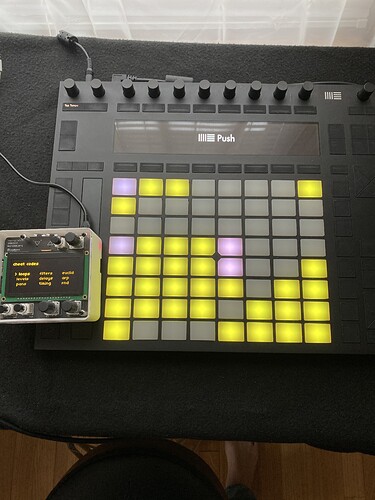 (you can also currently send clock divisions through each crow out under the [timing] menu – scroll all the way down, flip crow pulse to clk, then use E2 to move to the right and specify a division)

oddly this isn’t working…though i’m able to take the input of crow and assign macros the outputs don’t show any activity:/

Hi Dan - I think I may have a couple of bugs, or something I don’t understand. I keep running into circumstances when I cannot stop a pattern playing.

I’m using Ableton Link to run the Norns clock. I’ve got the record mode set to Bar 1; and the parameters set to quantise for that pattern.

It seems like there is an internal pattern clock/loop that isn’t being turned off somewhere? I had this last night, and today as well.

I have a Norns shield, Grid, plus Midi Fighter Twister connected.

hey hey! sorry for the trouble! it’s likely a bug – I’m testing some stuff out after @SPIKE mentioned some ghost patterns.

for the first issue, i’d recommend turning off quantization – additive arps with retrig turned off is really the “tightest” timing mode, because you can program individual steps and rests. euclid, as well. i’m going to be doing a pattern record rewrite soon, hang tight + thank you for the report!

just for posterity, pattern rewrite will include:

Thanks Dan, appreciated. Cheat Codes is still amazing; got my Midi Fighter Twister specifically for it…

Hey people,
I don’t know if you ever experienced this:

sometimes when I switch from the CC2 UI page to the parameters page pressing K1 and turning E1, i’m able to jump to the parameters page normally, but when I try to turn E3 to scroll through parameters I get stuck (something like, there is a visual scattering feedback, but the screen it is actually stuck on a certain index) and if I press K2 the page goes automatically to the Norns Pset page like I already decided to save a preset (i can see *Save, waiting for my confirmation) I have to press K2, then K1 and use E1 again to go back to the param page and everything goes fluid eventually.
I’m not able to say in which case this problem occurs, but it happens always at least a couple of times while I’m using CC2 .
It’s not a big issue, at the moment I’ve been able to not save nothing accidentally eheh!

Curious if you ever experienced this

I’ve also had this happen a couple times but couldn’t exactly put it into words.

I’m not able to say in which case this problem occurs, but it happens always at least a couple of times while I’m using CC2 .

you might actually be closest to identifying the right combo of gestures to cause this! lol

yeah, it’s a tough one to repro. i was able to get it by doing some weird key combos on the [loops] screen and essentially colliding the key hold timers (i guess they’re somehow outrunning the norns system menu logic?), but i feel like it’s rather rare – if folks are running into this a lot, tho, lmk!

still don’t have a clear way to cause it when i want to (and personally haven’t run into it much in the last month), so any help nailing down a solid repro case would be super appreciated

you might actually be closest to identifying the right combo of gestures to cause this! lol

Ahahah might be the “beginner combo” (the one you can never reproduce!)
Let’s see if I’ll be able to catch it in the next days!