a sample playground for norns

In the maiden package manager as cheat_codes.
Don’t see it? Please refresh using the refresh button next to the community header:

cheat codes is a live + pre-recorded sample playground for norns.⁣

⁣It’s called cheat codes because it’s sorta like being transported 20 minutes into a cranes session, where things start to get meaty. Instead of having to play through, you can just start at the boss level.⁣

This guide will be updated as folks ask questions, challenge my assumptions, and share their work.

Included in cheat codes is a dynamic help menu, which can be accessed by selecting [?]. In this menu, you can hit any key on an attached grid to learn more about it – this includes both its primary function and how it works in cooperation with other keys: 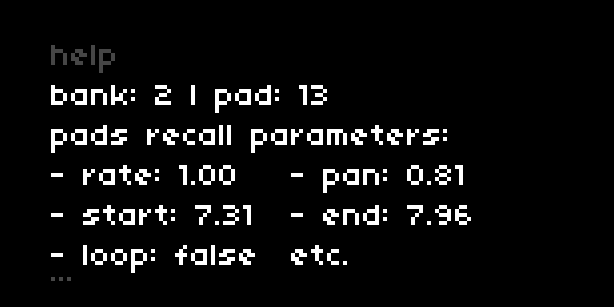 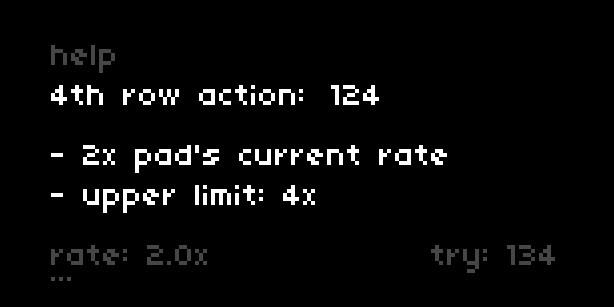 The help menu can be accessed at any point and does not interrupt your current session. Every action you take in the help menu executes in real-time, so you can jump in and out of playing and learning.

There’s some cool stuff on the roadmap, but really I’m super curious to see how you use it! Please share clips, videos, snippets, whatever you had fun making.

And feel free to ask questions! I made a lot of specific decisions based on my needs + perspective, so knowing how it feels for others would be super valuable

Watched the video this morning when it popped up on Vimeo. Many people are making things tempting me to get an Arc.

totally in awe of your design process
the results are really endearing and usable!

@disquiet + @glia, thank you so so much for kicking off positivity while this was still unlisted

@glia, for the third time: what r u even talking about, cuz concentrics + no metro are gold and the coolest things to have made

I love that you managed to work your love for pizza into cheat codes. Let’s grab pizza sometime and you can show me around all of this Monome and Max stuff you’ve been making.

WOW!
and thank you for the thorough manual!

can’t wait to dig into this noiz code!

this is next level, as is the depth of this manual. totally blown away by the amount of work put in here to help others start cheating.

can’t wait to dig in!

This is incredible. Thank you Dan.

Fantastic concept and really clever implementation of so many things!

The pizza slice thing is genius

amazing - its like cranes on steroids - thankyou Dan for the huge amount of work and detail in this script. Arc support and pattern recorders are a joy!

This is amazing work. As a new user to monome products and a newly built fates, your documentation was crystal clear and example inspiring. I really appreciate the performance tips as well, those were gold.

I know much of the community is extremely skilled and knowledgeable, so a heartfelt thank you from the new person that struggles even with the easiest of scripts. I look forward to diving in deep this week.

now in the project manager of maiden!

be sure to REFRESH your catalog in maiden.

Incredible work Dan. I cannot wait to dive in this week on cheat codes!

Question: maybe I missed it in the guide (which is amazingly detailed), but for live recording; how do I specify which of the 3 buffers I’m recording into? It seemed that my live audio was going into all 3 buffers at once. I’m probably doing something wrong

thanks for the kind words, everyone. I’m excited to see what you make with this!

how do I specify which of the 3 buffers I’m recording into? It seemed that my live audio was going into all 3 buffers at once.

ah, this is the difference between buffers + banks. I definitely can make this clearer in the guide!

when you load a fresh cheat codes session, all three banks (the 4x4 squares) are pointed to the same Live buffer, buffer 1. if you don’t change anything and you start playing audio in, this audio is recorded into buffer 1. since every pad in all three banks is by default set to reference buffer 1, they all start to play/traverse the same audio.

to change the buffer you’re recording into:

The bottom row of the grid interface looks like this:

Bonus: re-pressing the already-selected buffer key will kick the record head back to the beginning of the buffer.

to change the buffer a pad references:

Buffers can be switched and managed from grid directly, using the 1 2 3 and L C keys in the first and second row located between the bank and the Zilchmo right-angle slice:

After you set a pad’s audio stream (Live or Clip), use these keys to switch between the three buffers for that stream. For example: load 3 Clips in the PARAMS and for each of three pads in a bank, select Clip and choose a unique buffer for each. This allows you to play audio from three different pre-recorded samples in a single bank.

after you do this, you’ll notice that these buffer reference changes only affect 1 pad at a time. this is by design! a performance might include recording a pattern of pad presses and dynamically changing the buffers the pads reference as they play back.

to switch all the pads in a bank to reference the same buffer, hold ALT while choosing the buffer

does that help? please lmk and I’ll edit the guide

edit: @ludvista29, actually I just ended up making a video to demonstrate the decoupled nature of recording + playback, posted in the guide!

AHA! Okay this makes more sense now I think. I really appreciate you elaborating on this area of cheat codes for me. There’s so much to absorb in this script, I love it. I’m out for the rest of the day, but once I have my rig in front of me again I’ll give this a shot again. I’ll let you know if I have anymore questions

Thanks so much Dan and happy holidays!

thanks so much for sharing Dan,
and for taking the time to explain and make those deep tutorials

thank you so much for making this, i can’t wait to dive in. such a huge contribution!

for real, though, I feel like I just spent the last two months in a cabin with only softcut and enough water to keep us alive. @zebra, I cannot overstate how incredible softcut is. it is such a flexible and gorgeous tool that enables + rewards risks and trying bizarro things. it’s also so lovely to use in simple applications.

when I was field testing it with my friend Zach (Zilchmo), running trombone and synth and voice thru it, he asked me “how does it sound like that?”. I asked if he meant the script level stuff, the patterns or whatever. he said, “there’s something else, though. that stuff is there, but it’s also about the way all that sounds.”

softcut is such a gift