Hi @dan_derks !
I’m running into some previously unknown behaviour on CC this morning;

In my collections, saved patterns don’t seem to work. I’ve gone through a lot of my saved collections to check. Clicking the stored patterns on the meta page is not working and for some reason I’m not able to record new patterns on the main page. When arming a pattern for record, the pad is not blinking like it used to.

On a fresh start up everything seems normal, but when switching to a different collection the above seems to occur again…

hey hey! hmm. can you try a clean install of the script? just access your norns filesystem and delete the code > cheat_codes folder? then re-download it?

i’ve tested restoring old collections pretty extensively, so if that doesn’t work then there must be a single setting that’s throwing it all off. this’ll be easy to spot – can you PM me your data > cheat_codes folder?

also, please PM me any output from maiden when you try to load a stored pattern?

Thanks, will try this when I’m back in front of the computer. Just to be sure; when I delete the script, are collections still safe or do I need to make a backup of the folder in dust?

Why did I think there was going to be a cheat codes steam today? I can’t find anything… did I dream it?

i’ve tested restoring old collections pretty extensively, so if that doesn’t work then there must be a single setting that’s throwing it all off. this’ll be easy to spot

when i fixed things for establishing a fifth in 1.2, I did not fix recalling one that used the previously broken syntax.

anyway, with help from hans (and hans’s helping hands), i fixed it up. if you run into what hans ran into, do not fear! i will release fix today (edit: tomorrow)

First bit of coding experience from these hands

Norns effect at work… welcome to the club!

Set up for a full weekend of cheating! 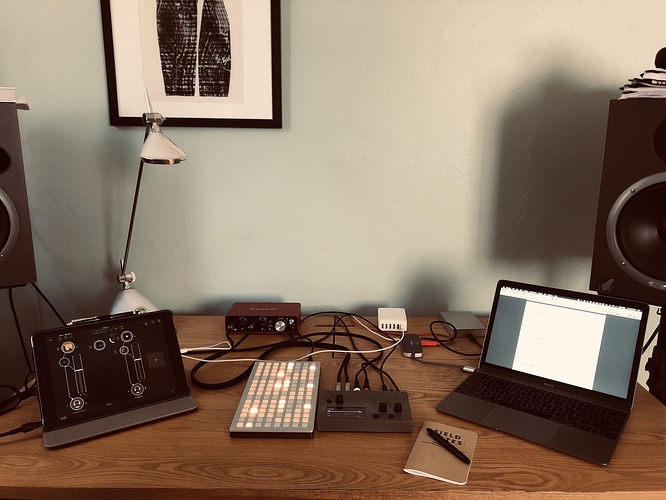 i’ll get the update and vid out hopefully tomorrow AM

BTW iPad running AUM running into CC for looping then into laptop Ableton to mix with other loops, all synched via Link is REEDONKULOUS!

secret update – don’t have docs done but wanted to get the stuff covered in yesterday’s livestream into people’s hands:

new stuff (which includes the fix for @DuellingAnts’s fifths stuff yesterday) is now in maiden’s project manager (commit 76b1f08)! i’ll do a formal post / doc update tomorrow – have a great rest of the weekend, y’all

Made my first track with cheat_codes now. Script’s a work of genius @dan_derks it’s like the Octatrack’s funky cousin.

Maybe calling it a track is overselling it. It’s just one minute of strange stuff going on.

I live recorded some stuff from my Prophet 12, mixed it up with the cheat codes and used the pattern sequencer and then imported some noise from an old DFAM I had for awhile, and threw in drums for good measure.

And after that, I destroyed it all. In less time than it takes to fire up an Octatrack.

all the livestream features, plus a sync’d/unsync’d random record probability treat for @swhic + @edison! also, much love and thanks to @hypnosapien for the impetus to dig deep into auto-slicing and deepening the script’s bpm awareness.

endorsement of the year, tbh. and a lovely artifact? thank you!

I’m gonna be all over the quantized recording stuff @dan_derks , but you knew that already. This is glorious stuff.

Gonna have to cancel my son’s birthday tomorrow. As the years pass, he will forgive me, in time.

super excited to dive in!