The natural reverb from amping and micing it up definitely accentuates the construction site vibe, I use convolutions when I want to add similar space (but less nuanced obviously). Did you manage to snap a picture of the speaker/mic setup in action?

The sound kinda build up organically so it’s hard to say what parts of the system are most influential. First, I think that the resonance of the Dubernator adds some space to the two channels that it is used on. Then those two and the two other unfiltered signals were amped and sent to “prepared” speakers. The Duber signals went to a speaker attached to the end of a 3 ft tube and another larger speaker placed face down on the bottom of an upturned plastic bucket. The other two went to transducers attached to very resonant metal pieces hung from the ceiling, one with a short spring attached. So lots of good “ambience” and such already.
I used an AB pair of phantom powered electret mics about 6 feet apart each pointed at the center of the speaker and transducer pair on that side about 1-2 feet away (I’m at a table in the middle.) I tried other set ups but this gave the best stereo feel for me.
The room itself isn’t huge (18x18) and has a sort of tray ceiling with sides that slope up to the ceiling from the walls (following the roofline). One part has a floor rug and one part is bare concrete and where I’m not playing it’s full of stuff as it’s also my pottery studio. I don’t know if it’s a good acoustic space or not but I think it has a “sound.”
I’ll add a few pics tomorrow to give you a visual reference.
@crunchydrums here are some pics as promised. The speakers/ transducers are circled in red and the mics in blue. Not everything is hooked up; I just put it partly together so you’d get the idea of my layout. 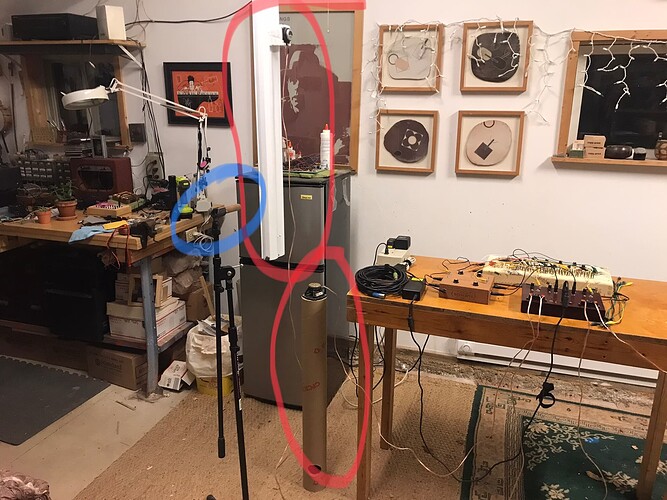 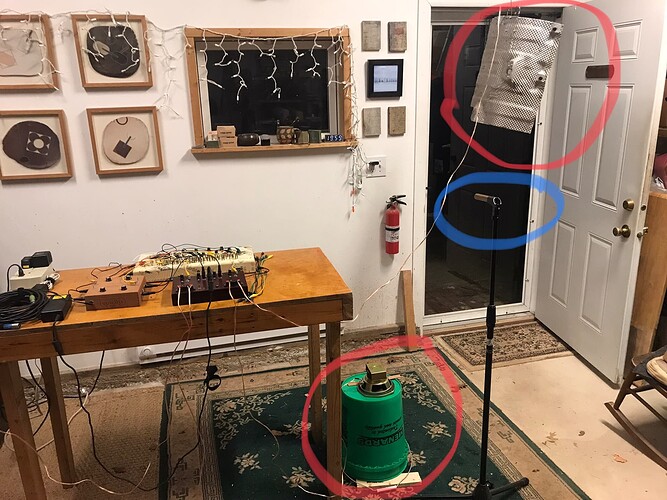 I’m a little late to the game today, but I am playing along with Bandcamp Friday and offering a discount code for the album, cassette or the art package as shown on my page. Use the code “safetydance” for 20% off of everything until 12PM UTC Dec 4th.
There are still a few download codes available above but if you’ve been wanting a copy on cassette with that extra track, here’s your chance.

What a lovely album, listening on my phone now but will check again later using proper headphones.

Just discovering your album. I’m quite curious about these tones I’ll need my headphones too).
Thanks for sharing !
I used the code v5cm-y2ev

I used the code, thanks!

Really looking forward to listening to this

I’ll add my voice to the crescendo of approval for this release!
Certainly my favourite noisy music of the last year or two. Really excellent stuff.

Thank you for all the kind words everyone! I’m glad to know that the album is finding an audience here.

@eblomquist and @GrrrOwl it looks like you grabbed the same code. From what I understand, it might work for both of you, but if you need to grab another, feel free.

It worked for me, thanks!!!

Since it says “this code has been used too many times” I assume the same code gets several uses.

Thank you, @ParanormalPatroler !
Yes, each code can be used multiple times in a short period of time before it expires. If I remember correctly, Bandcamp say they set it up that way so someone who experiences a error on download or an interruption in service doesn’t have to request another code.

The kindness of offering codes aside, this release is, imho, very much worth the special recognition which cold, crass cash can denote.

this release is, imho, very much worth the special recognition which cold, crass cash can denote.

(I do have a few cassette copies left!