A set of Max For Live devices based on the Chord eurorack module (V1) by Qu-Bit Electronix.

I’ve always been intrigued by the Chord module from Qu-Bit Electrontrix, and figured I’d try making one for myself in Max For Live. I’m not a well-seasoned max patcher but putting this together was much less painful than I thought it might be.

As of version 1.0.1, Chordial now includes a MIDI Effect (Chordial MIDI), that sends out MIDI notes to whatever you’d like to play chords with. Thank you to the lines members that suggested this, as I think this is actually more fun than the original instrument I had come up with.

One issue remaining is that the controls will fill up your undo history under heavy automation (and I built this intending to automate everything). If anyone can recommend a way to exclude the controls from the undo buffer while at the same time still exposing them to automation I’d be happy to fix that. 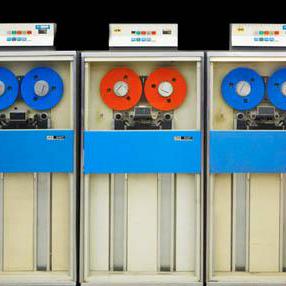 A set of Max For Live devices based on the Chord eurorack module (V1) by Qu-Bit Electronix. - silent5/chordial

looks great! excited to try this! thank you for sharing! ah wait, is this confirmed to not work in live 9 m4l/suite?

is this confirmed to not work in live 9 m4l/suite?

It will mostly work in Live 9, but you won’t be able to route the individual chord voices to their own audio tracks.

The issue is with how I’ve currently implemented the voice routing. I’m using a plugout~ object for the stereo mix, but then I have an additional plugout~ with another 8 outputs for routing to other tracks. It looks like this: 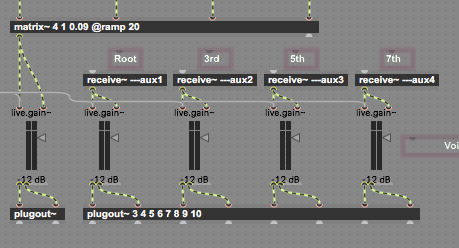 In Live 10 this works great, but I just checked in Live 9 and the additional outputs from the second plugout~ won’t show up in Live 9’s Audio From chooser. So in Live 9 the “Aux” buttons are just improperly named mute buttons.

In the future I’d like to rework this so you can direct the voice outputs directly from the device itself (similar to the approach taken with the excellent outist - insist devices)…though to be honest I’m not sure if that approach will work in Live 9 either.

I am wondering how difficult it is to implement a midi out functionality.

Awesome, thanks for the feedback!

MIDI out wouldn’t be too hard, but the issue (at least as I see it and there’s a good chance I’m wrong) is that I’d need to send out the updated note information - and thus trigger a new note-on event - every time one of the parameters changed.

Also I was just looking into how hard it would be to replace those two sus shapes with drop-down menus. So the quality selector would then be Maj, Min, and two user-selectable qualities (sus, Dom, Half-Dim, etc). I’ll probably try to implement that this week if I can find the time.

Ah I feel you, I wish I could be of any help on this.
What I can say is that from a user standpoint, I would not mind having a new note information sent out on each change of parameter

Played with this over the weekend, really love the sound! Thanks!

Cool cool! You ARE helping. Suggestions are always helpful.

I just finished adding the ability to change the last two chord qualities via a drop-down menu (sus shapes, dom, half-dim, aug) so that’s out of the way. I’d considered making all four qualities modifiable but I’m not sure how useful that would be. If anyone has a preference I’m all ears/eyes.

I’ll try adding MIDI out in the next day or two. It really shouldn’t be that difficult since the pitch data is treated as MIDI right up until it gets sent to the oscillators.

I’ll second midi out would be awesome! Although I got some great tones running the synth through Eventide’s Quadravox and some Soundtoys plugs. Thanks for this.

So I had to spend Tuesday night in a tiny Manitoba town for work, and I decided to try and prototype MIDI output from Chordial during my downtime.

It worked! Here’s a demo of Chordial sending MIDI out to an instance of Wavetable and some effects. This is running in drone mode, with each parameter change sending out a new MIDI note. I’m slowly automating the envelope attack and sustain on Wavetable to change from plucks to a drone.

I’m going to try and finish this up ASAP. I think it will be a separate device altogether with a very similar interface:

Thanks again for the suggestion! It works better than I thought it would.

Any more suggestions are definitely welcome.

You rock! Looking forward trying this out and Thank you so much for putting time into this.

Thanks, and my pleasure! There’s something about patching in Max that I find oddly therapeutic.

Hi! I’ve updated the github repo (and the first post of this thread) with some recent changes. There is now a separate Max MIDI Effect device (Chordial MIDI) that sends out the chord information as MIDI notes. I’ve been having a lot of fun with this, thanks so much for suggesting it!

I’ve also enabled the last two chord qualities to be changed to a (currently small) variety of shapes in both Chordial and Chordial MIDI.

Finally, I couldn’t quite figure out how to get the MIDI version to send out note information on separate channels (can’t select/assign MIDI ports in Max For Live), so I added a simple MIDI delay section to try and make up for it.

All updates should be here:

A set of Max For Live devices based on the Chord eurorack module (V1) by Qu-Bit Electronix. - silent5/chordial

If there’s any issues or if I’ve done something…weird…please let me know! Both devices now rely on some javascript so make sure you grab those .js files if you encounter any issues.

Going to play with this one today, thank you so much for the updates!

thank you for this. I’ve got the MIDI version working fine but the audio one still doesn’t load to an audio track in Live. Tried to follow the instructions for repair but must have made a mistake. In any case, much appreciated

Did you try dropping the non-MIDI version of Chordial onto a MIDI track? It’s an Instrument device so it wants to live on a MIDI track like a VSTi/AU.

Or do you mean you’ve dropped it on a MIDI track but can’t access the audio outputs form the AUX bus?.

maybe that’s it. I can get both dropped onto MIDI tracks but I can’t get it onto an Audio track and assumed the non-MIDI version would work on an audio track

Ah yes that’s probably it. If you try to drop a MIDI or Instrument device onto an audio track in Live, it will refuse to cooperate and should give you an orange status message at the bottom of the screen.

Thank you for bringing this up! I should clarify in the documentation that they’re both meant to be placed on MIDI tracks. I can see how the naming could be a bit misleading.