I’m starting a new thread on attempting to build the Ciat-Lonbarde Tetrazzi Organus from the paper circuits collection. There is a short thread on Muff Wiggler from someone else who attempted this back in 2013. I’d suggest reading it as a start:
https://www.muffwiggler.com/forum/viewtopic.php?f=65&t=82656
In that thread are links to a gif of the paper circuit from Richard Brewster’s Pugix page:

And his adaptation of the pcb from Peter Blasser to a modular unit:

After I received my Ciat-Lonbarde Tetrazzi Organ, I spent a lot of time delving into its design.  I wanted to understand it as well as possible in order to be ... Read More

I’m using all the above to try and figure out some of the more obscure symbols on the paper circuit before i consider building it as a paper circuit or looking into ordering a PCB.

Here’s what I have so far with reference the the following highlighted image: 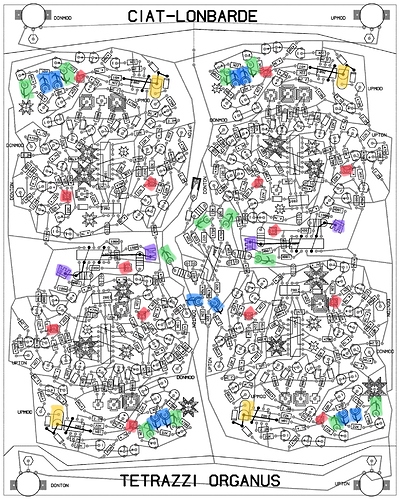 I working on tracing out the circuit in order to verify a few things. One of which is that I suspect one of the outputs near the center is mislabeled: 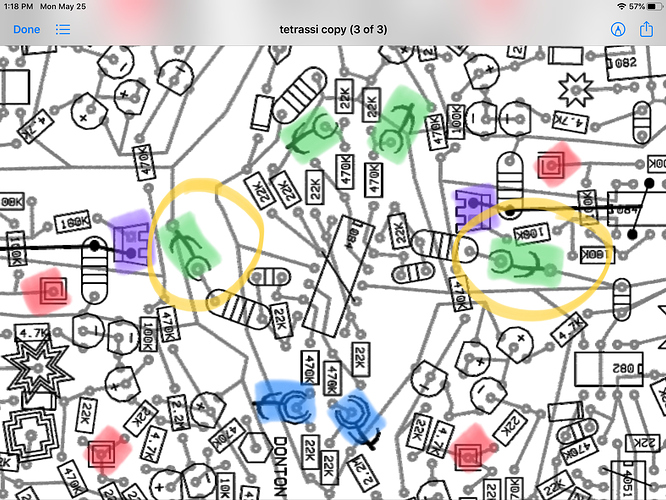 Open tetrassi copy2048×1536 740 KB
One of the circled green outputs should be blue, I think. These are the two main outs that all the other ones are connected to as they are the only ones with a ground.
The other question I have is if all the virtual grounds get connected together and if they have one source and where that is.

Hope this helps. I’ll do my best to answer questions with my limited electronics knowledge.

First addition/ correction:
From Richard Brewster’s page, it seems the cross nodes are hard wired internally to each other in this pattern:
** Not only are the rates under VC, each VCO has two modulation inputs, one for up (UPMOD) and one for down (DONMOD), that are hard-wired internally to come from the other VCOS. The internal patch looks like this:

Thanks for starting this thread. I’m very interested, as I’ll probably build a variant on the Tetrassi when I’m (finally) finished with building a Rollz-5 / Plumbutter mixup.

Richard’s schematics of the Sidrassi on this page could be helpful:

An updated version with 9v as very pale pink and 0v as baby blue. 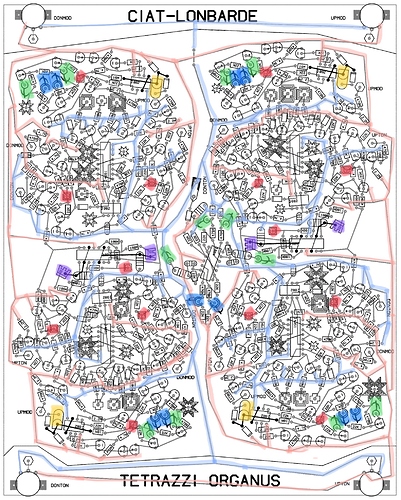 Thanks, @barrford! I can’t find it either…

Edit: looks like there’s some MIDO action going on in one half of the center tl084 but it doesn’t seems to leave that chip. Maybe there’s a missing MIDO symbol that would connect to pins 1&8? 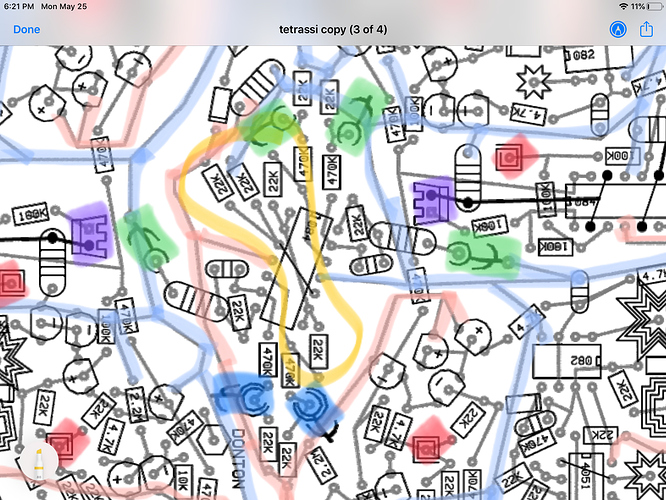 Well spotted, I think you are correct!

There are extra connections to the inverting input (pin 2 and 9). Are these inputs or just tapping off the MIDO voltage to offset before being output via the output node?

Also, I had a look at the paper circuit in Osmond PCB yesterday evening.
The paths that are marked “Air-Jordan” (i.e. connect with wires on top of the circuit, rather than using the component legs to connect as for the rest of the paper circuit) are on the silk screen, rather than the single layer traces.
We could move these to a 2nd layer before getting the PCB manufactured.
We might also move the MIDO to another layer and connect them all up.
I haven’t had a PCB manufactured before, though, so I don’t know what I’m doing!

@barrford, thanks for looking at the top traces. That’s what I thought but it’s good to know. I don’t have a Mac and am not inclined to go into downloading software to look the the Gerber files just yet.
I haven’t ever ordered a PCB myself either but maybe we can get others interested in this project who have. I’m not against trying this as a paper circuit either if I’m convinced I know how to hook it up.

I traced out the circuit of the entire center tl084: 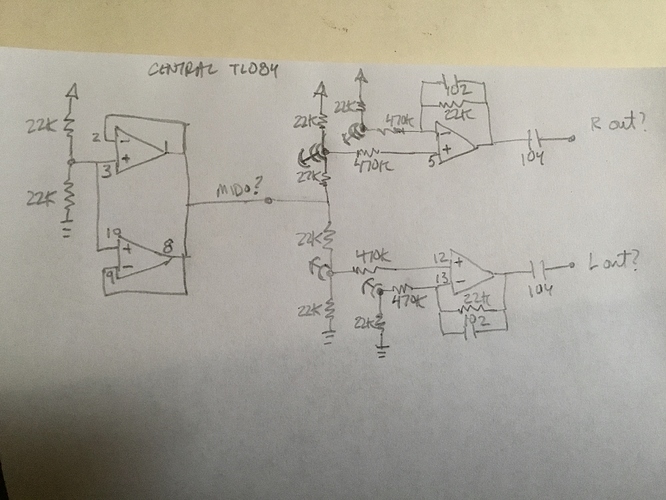 Last post for today!
From the other end of the circuit, here’s the schematic for the piezo bar input and the dual VCA (at least that’s what Richard Brewster calls it. His schematics of the Sidrassi have been very helpful and very close to the Tetrazzi so far.) 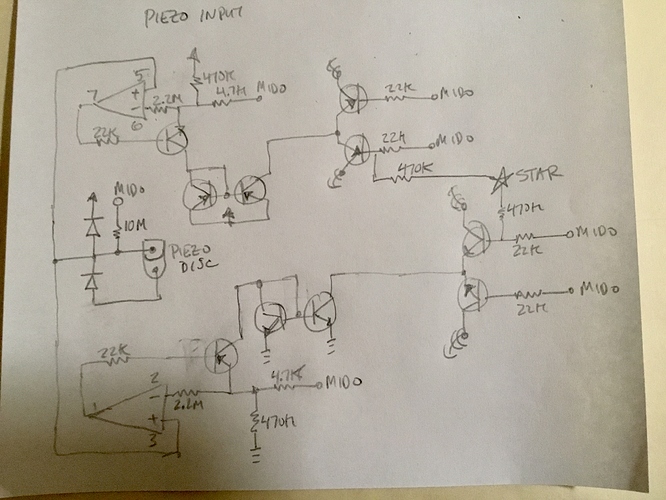 Ok, I’m still slowly working through the paper circuit and have reached a few conclusions: (Scroll down for photo documentation.)

For those playing at home, I’m comparing the paper circuit of the Tetrazzi to the schematics of the Sidrazzi drawn by Peter as shown in the Sidrazzi assembly manual: https://docs.google.com/document/d/15YufBEtuCzgu2H8mu9EkYxsxM2j4sXejspT7Kb8MfSs/mobilebasic
And those of the Sidrassi traced out by Richard Brewster:
https://pugix.com/synth/ciat-lonbarde-sidrassi-schematic/

As to point #1 above, I compared the schematic Peter calls “stereo output preamp circuitry” to the paper circuit and filled in the values: 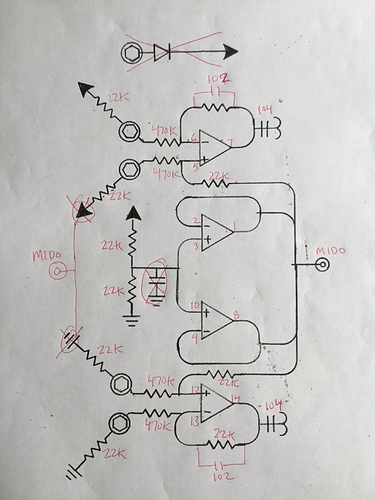 image2448×3264 1.74 MB
Most of the placement and values are consistent with paper circuit with the addition of some small 102 caps in the feedback of the mixers, a missing 10 uF cap on the voltage divider (value is taken from Richards schematics) and having 2 of the mixer inputs referenced to MIDO and not VCC and 0V. In this schematic, the hexagon in a circle symbol correlates with the “output symbol” and the “double output symbol” of the paper circuit. The symbol that is 1/2 a figure 8 is an output.

For my own sake, I’m going to put a name to this symbol:

And for it’s similarity to the logo for the band Einstürzende Neubauten, It’s gonna be an EN from now on. It’s partner will be the 2EN.

Next, I compared Peter’s schematic of the “variable duty push/pull oscillator” from the Tetrazzi manual to the paper circuit: 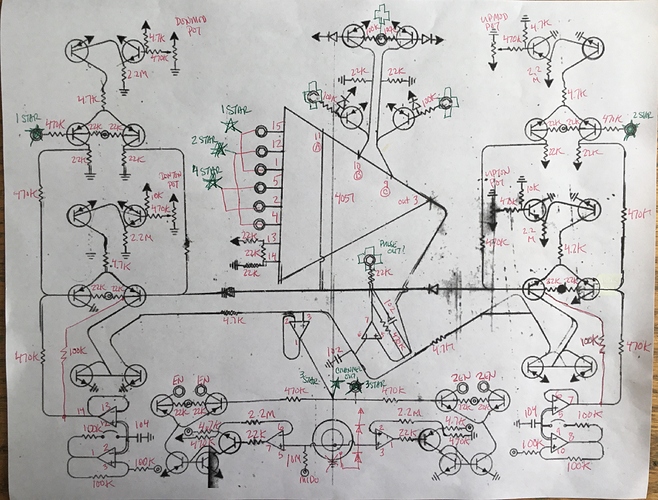 The bottom most central section is the a piezo (the circle in a circle) bar control. There is a difference here in that the schematic shows the piezo connected to ground but in the paper circuit the brass outer section is connect to a pair of diodes referenced to the input and 9v. At the top of this section, there is a hexagon node i have marked “3 star” (I’m looking at one quadrant of the paper circuit, the bottom left, and in that section the star has 3 outlines.) In his schematics, Richard notes this as Channel Out. There is a second 3 Star symbol in that quadrant that corresponds to the line going to op amp that is pointing down above it. So the star symbols within the same quadrant should be connected together. In addition, these two are connected to the same symbol in the next quadrant over. 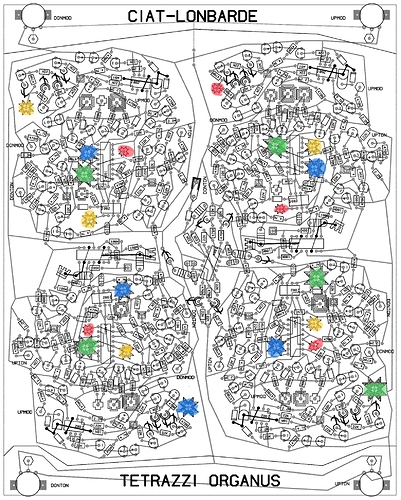 tetrassi cross connections1630×2028 1.13 MB
This interweaves the bars and oscillators. Still in this bottom section, at the top of each end are the EN and 2EN connections that will be connected to the audio mixer. Just outside of these, still at the bottom are the scroll circuits with the buttons shown as a arc over two points. There is an additional 100k resistor on the paper circuit from the scroll to the base of a transistor. Above these are the UPMOD, UPTON, DONMOD, and DONTON pots and their associated components. On the right the 2Star symbol is connected by a trace on the paper circuit to the 4051 at pins 12 &14 (and will be also be connected to a 2Star in the previous quadrant.) On the left, the 1Star is similarly connected by trace to pins 1 &15 of the 4051. The 4Star connection to pins 5 & 2 comes from the next quadrant. Put simply: connect all five of the same star together.

Above and below the 4051 are the Cross connections which I believe are the touch points on the Tetrazzi bars in the build manual. The one beneath the 4051 is called Pulse Out in Richard’s schematic and 2 of the three others might be the Glitch Points. I’m not sure about the other. I’m also not certain if these get connected internally like the stars but i suspect not.

The final thing that I’m uncertain of is the connection of the EN and 2EN symbols to each other. Each quadrant has two EN and two 2EN outputs and the mixer has two EN and two 2EN inputs. The outputs are so close together, they could be easily connected at the quadrant if they were meant to go to the same location. One way would be to connect all 4 Left EN outs to the Left EN in, 4 Right EN outs to the Right EN in, etc. or some additional interweaving that I can’t imagine right now. Thoughts?

In summary,
I think the paper circuit is missing a connection for MIDO at the central tl084 to pins 1&8. @barrford suggested this could be run as a top trace to all the MIDO points on a 2 sided board. I’d probably also add a 10uf cap from pins 3&10 to ground and a power supply bypass cap (Maybe 100uf?).

The symbols Peter customarily uses for output are the left and right outputs from pins 7 and pin 14. The other similar symbols (which I’m calling EN and 2EN) are connected in pairs from each quadrant to the similar symbols that feed into pins 5&6 and 12&13.

There are 5 of each of 4 versions of Star that are all connected together internally.

Each quadrant has a DONMOD, UPMOD, DONTON, and UPTON which are all connected to the wiper of a pot of the same name. I think these are 100k linear pots.

In a note on repairing the piezos of a Tetrazzi, Peter mentions that early models could develop a whine due to constant triggering from cracked piezos and their reference to ground. He said that he now referenced them to MIDO to prevent this. This leads me to believe that the paper circuit is this revised version as the piezo ground is referenced to MIDO by way of a diode and 10M resistor.

I think that covers what I’ve figured out and how I’ll proceed with building it. I’m thinking that I might try to build this as a Tetrax. And I think the differences would be to replace the scroll button with a pot (Peter describes how to do this in the Tetrazzi build manual.) and to make a patch bay for all the ins and outs of the circuit. I think I know most of them but I still have a couple to find.

@Coitmusic Excellent work! I look forward to seeing your progress. I’m still working on my Rollz, but I’ll give the Tetraxzi a go at some point, no doubt.

Thanks! I’m pretty confident I have it all sussed out but you never know until you build it. I feel like I can order a few more parts and give it a go as a paper circuit…after I finish the Nobsrine.
Since you were able to open the circuit in Osmond and look at it, is it possible for you to separate out the bottom layer and copy that for me? I could just mirror flip the front and use it as my guide for the solder side but it would make it a lot easier if it were like all the other paper circuits.

@Coitmusic Here’s a PDF of Layer 1 without the silk screen. It’ll need cropping, mirroring and resizing, so I left it as a PDF to retain maximum information.

Good luck, and let us know how it goes!

Also please post some examples of your Nobsrine when you’re finished. I’m interested in building something like the DDD Srine as a portable automatic music machine, so it’d be interesting to hear how the Nobsrine sounds.

Have you sketched schematics for the Nobsrine? I’ve started but haven’t made much headway yet. I’m mostly interested in how the nobs and sample and hold works.

@barrford Thank you, that will help so much! It will probably be a few weeks before I get to building this but once I have something to report I’ll post it here.

I haven’t looked into the Nob circuit yet, that might be fun. That one might be a bit more difficult as I’m not aware of any documentation on it beyond the paper circuits page and one article:
https://econtact.ca/17_4/blasser_ovalsynth.html
But it does have an even more obscure schematic: 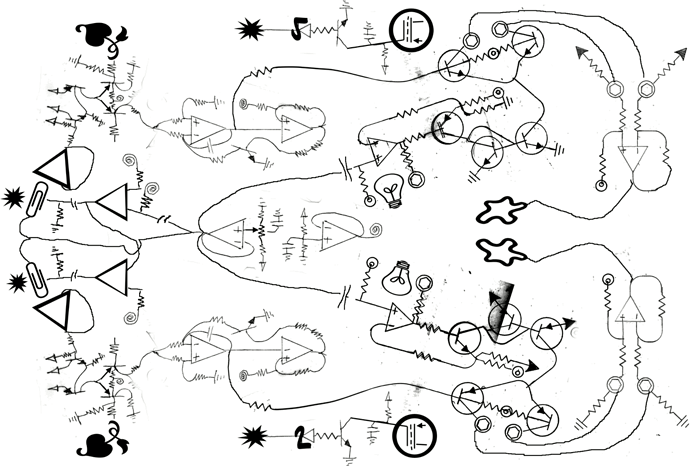