something is weird with your system. it seems you are running parts of our lua stack from norns 2.6.1 (before the recent image-based update), and parts of our supercollider stack from the latest main branch. (2.7.0)

(did you try and update to latest without reflashing the disk? or something? anyways maybe @dan_derks or someone can help with that on another channel.)

anyways, the error message is pointing out the problem: the script is attemPting to declaire a parameter with the clock_source Id, which is already used by a system parameter. this error condition was introduced in 2.6.1 because that anti-pattern was causing bugs. in the latest norns version we downgraded the error to a warning, but it’s still something that @jakecarter shoudl be aware of and hopefully fix (its trivial, just remame the parameter ID, the label can even stay the same.)

Ah. Didn’t know that. I should be able to make that change pretty quickly. I’ll try to get that done this weekend.

4 posts were merged into an existing topic: norns: new image 220306

Hey @St0rMl0rD, I just pushed a 1.5.1 update to fix the broken clock. Not sure how long it takes to show up in the Maiden library, but here’s a direct link: Release circles 1.5.1 · JakeCarter/circles · GitHub

Hello, sorry to bump but I am having some issue with using external midi to control bpm/start/stop on this script (which I love by the way). I have the clock source set to midi, clock option set to external, but I am not seeing bpm changes or seeing the script run when I start/stop on my omx-27. I do see this working on the awake script, so I’m wondering if there’s something I can fiddle with in the code to get this working. Thanks!

Oh wow. So cool people are still using this. I’m actually off work for a week so I’ll try to look into this soon and let you know.

Hot off the presses! 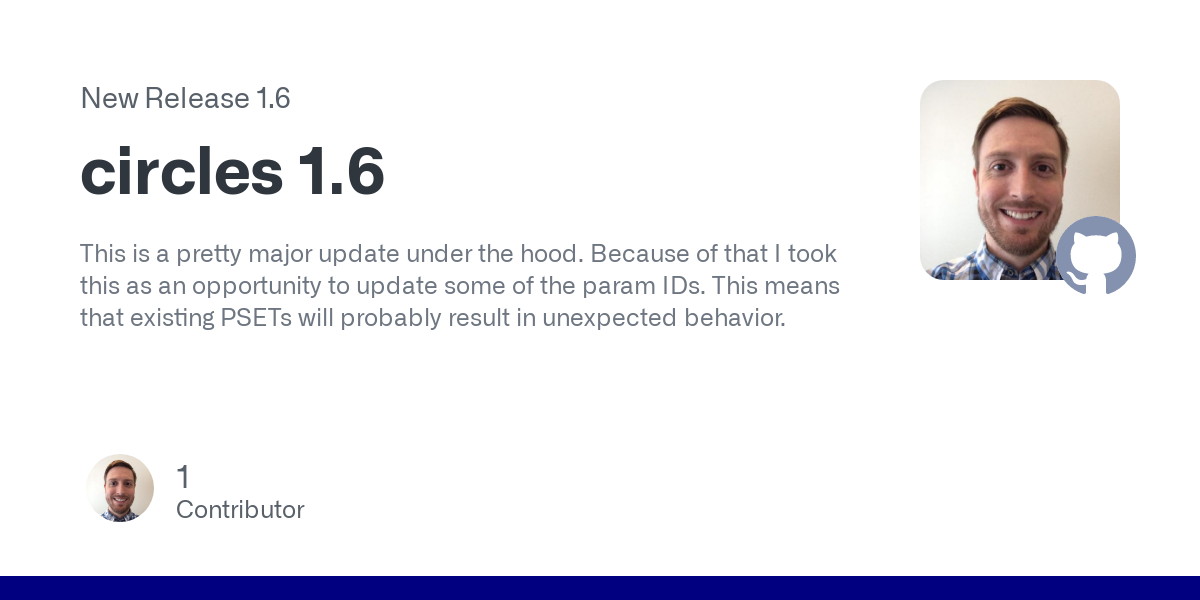 v1.6 This is a pretty major update under the hood. Because of that I took this as an opportunity to update some of the param IDs. This means that existing PSETs will probably result in unexpected b...

Read the release notes before updating please. I had to change some of the param IDs which means any saved PSETs will not work as expected.

MIDI support should be much better. circles will now respect incoming BPM and transport controls now, if setup via the CLOCK param menu. Just as before, you can still output note values to the internal audio engine, MIDI, crow, or crow + jf. I didn’t test any of the crow/crow+jf functionality since I didn’t change any of it. Hopefully it’s still working.

Also added in a new “step divisions” param. Default is 1/4 notes, which is what is used to be hardcoded to.

This was a lot of fun update, so thanks for the push. Let me know if something doesn’t work as expected or if you have any requests.

Awesome update, thanks for taking the time! It works great =]

[is self promo allowed? here’s a quick stream I did using circles Grids mode on omx-27 with dirtywave m8 and norns shield (circles) - YouTube]

That’s awesome! Thanks for sharing. Is circles midi going out to the M8? I’ve never seen the omx-27 before. Is that acting as the drum sequencer or are the drums a pattern on the M8?

It’s fun seeing circles being used. I honestly had no idea anyone used it.

Yep, circles midi goes through omx-27 to m8 and controls a synth. omx has a drum mode (grids) that’s also going to m8.

And Circles is great! Kinda chaotic, but keeps a pattern going over time, easy to understand the visual/audio connection, sounds pretty flawless no matter where you drop spawns…