A quick side note, I don’t want to derail this fascinating thread too much but…

How do you run classic software and patches on recent Mac ?

Catalina, Big Sur and Monterey won’t let you run 32bits apps and I’ve seen that Apple has made everything they can to prevent users from downgrading MacOS. It’s even worse with Monterey, this thing won’t even let you create a bootable USB for another computer. And on M1, using these classic softwares is even less feasible I’m afraid.

As an example, although I’m very happy with the latest version of the wonderful Argeïphontes Lyre which I’ve just discovered, I have tried to install older builds of it to see how things had evolved over time and if the « nomenclature » of the controls and algorithms was different in L1, L3 etc.

On a MBP 16inches (Intel), I have installed El Capitan on Parallels 17 but the thing is so slow that it seems impossible to use this as a permanent solution. Plan B was to use a MBP Core2Duo (the old white MacBooks from 2009) with a new SSD. It took three computers and Parallels and three cable adapters just to create a bootable USB of OSX Lion and install it but that’s another « Amazing! » story, I’m not sure yet if that’s a viable solution because I’m not done with that yet.

So, back to my question: how to use these classic softwares and patches on recent and future Mac ?

All the softwares mentioned above are a wonderful source of inspiration, I didn’t know most of them but I’m glad I discovered them thanks to this thread. Personally, I have affection for the (more mainstream maybe) Reaktor factory collection from the late 90s.

I’ve just mentioned the 32bits apps for x86 here but it would be great to run PowerPC apps on recent machines too. If anyone has a solution for that too… I’m all ears

Edit: re-reading this thread, someone mentioned “Sheepshaver” earlier for running OS9 apps maybe, I will explore this path…

Edit:
I installed Lion on a white MacBook and got AL5 running on it, really fun to see the differences between versions. Now I need to go back in time once again and find an iso of Snow Leopard which was the last version of OSX containing Rosetta1. Hopefully I can run AL1 and 3 on it. Perhaps I can even have a Snow Leo install running (smoothly?) in Parallels on my MPB16…

Regarding the Mac M1, from my research: impossible to run any 32bit apps on it. But no issue with the latest version of Argeïphontes Lyre on Monterey M1. 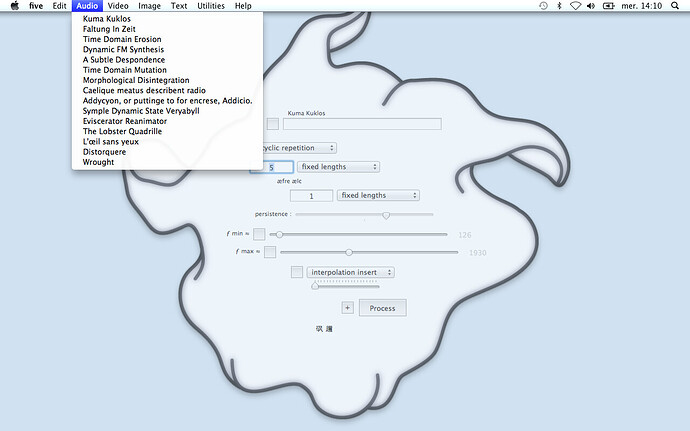 although I’m very happy with the latest version of the wonderful Argeïphontes Lyre which I’ve just discovered, I have tried to install older builds of it to see how things had evolved over time and if the « nomenclature » of the controls and algorithms was different in L1, L3 etc.

@AkiraRabelais, the creator of AL, is on Lines. Perhaps a dedicated thread would be a nice idea?!?

From my understanding, discovering and using Argeïphontes Lyre has to be a personal journey, it’s part of the magic, but yes this software would totally deserve its own thread on Lines. I will spend the day with AL6 again, I need to unravel the mystery behind some of the buttons and sliders

I didn’t use Vokator much, I had a bit more experience with the sort of similar but much uglier Antares Kantos (sort of a pitch-following VA synth/FFT vocoder hybrid).

I’ve also got a few good memories of playing around with Sounds Logical Wavewarp.

I was listening to some old SND tracks and wondering what software they were using? It still sounds futuristic in its aesthetic and tbh way more interesting that a lot of modern obligatory euro setup performances. 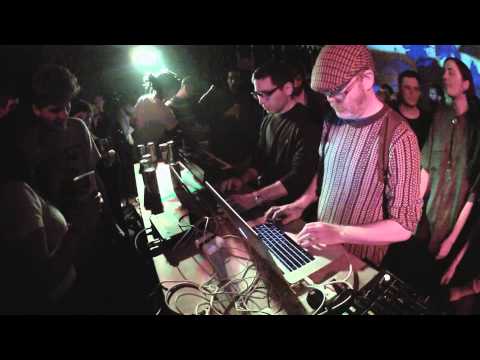 wondering what software they were using?

Here’s a performance with some of his patches, including some original SND patches: 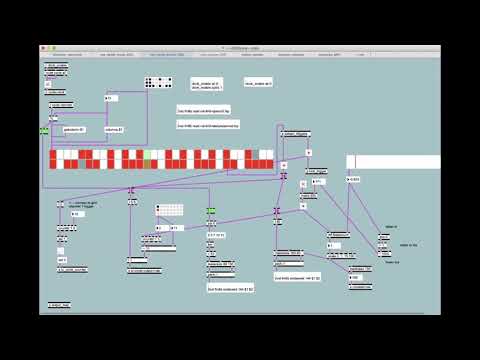 Thanks! I didn’t realise this was discussed elsewhere, makes sense it would be Max. I could never quite get to grips with it.

Earlier tracks don’t sound quite as far down the rabbit hole, I enjoy those more. I’ve seen them play live with the more clipped samples and it sounded great but brutal.

At first glance it reminded me of The Master from the Fallout 1 game. 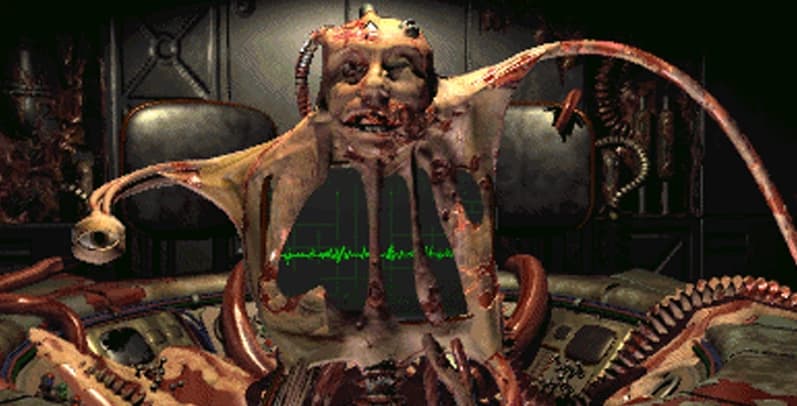 I still kind of want to make a Windows 95 box dedicated to running Seer Systems Reality. I doubt I ever actually will but maybe some day.

Destroy FX plugins updated to run on modern machines (“support for 64-bit systems (Windows, Apple silicon and Intel-based Macs”) apparently! Worth clicking through to their site, even if only to enjoy the 2003-style web design:

KVR Audio News: Destroy FX has released updates for most of its free plugins, including support for 64-bit systems (Windows, Apple silicon and Intel-based Macs) and much more: Buffer Override 2.7. EQ Sync 1.1. Ge...

has anybody been successful in audio endeavours with sheepshaver’s OS9?

Man I had the exact same problem. Nearly broke down and bought a PowerBook G3 and give up. I hope you have better luck than I did.

I posted this over at Modwiggler, but not sure if that gets much use as it used to, and figured what with there being some Nord G1 fans in this thread, I figured this might be a good place to put this.

I recently chatted with James Parker (Logos) about his latest release North Vol.01 https://boomkat.com/products/north-vol-01 and his use of the Nord G1, which sits at the centre in every track (except track 1).

The show is one hour long for Wearehappened and will air tomorrow on Camp Radio 17:00 BST. It includes lots of chat about the G1 and his album, with selections from the release and some studio bass haha

Should you miss the show, it will be uploaded to Camp Radio’s Mixcloud generally the Friday following the show.

I hope it is as enjoyable to listen to as it was for us to chat about his music and the G1. 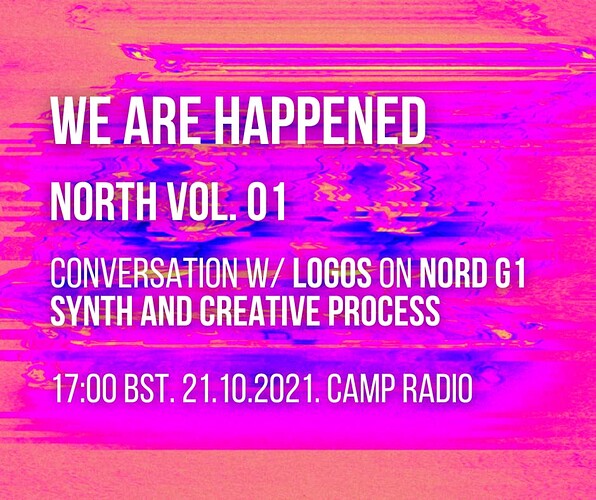 Lovely, thanks for posting.

I, for various reasons, just got my first Windows laptop in about 10 years. Running W10. Wondering what classic computer music software I can get for it. I’ve got a lot of other things to attend to, so messing with old software is not high on my list right now. But I hope to add more things to the mockfuneral site. There’s such a long while inbetween updates that I constantly forget how to use jekyll, so I have to re-learn it every time.

Really great website and idea you have by the way, looking forward to more posts. Actually James mentioned Curtis Roads right at the end of our chat as a big influence and the new edition of Computer Music Tutorial etc

Ah, didn’t know there was a new edition. I got a copy a handful of years back at a little pop-up second hand market for, what, 3 euros? I was pretty surprised when I looked up the prices online. And I didn’t even notice it was Roads when I bought it, just thought it sounded interesting.

The new edition of the Computer Music Tutorial is mentioned by Roads here Books — Curtis Roads - no publication date it seems, I thought it was 2022 but looks like I made that up.

Ah hey @logos262 didn’t realise you were in Lines, great!!

Also, Camp Radio have just added this to Mixcloud should anyone wanna listen again, or if they missed it.

I’m looking for a SuperCollider patch called “apPatch” apparently used by many Mego’s musicians in early 2000. Does anyone still has it? Is it compatible with the actual SuperCollider version? 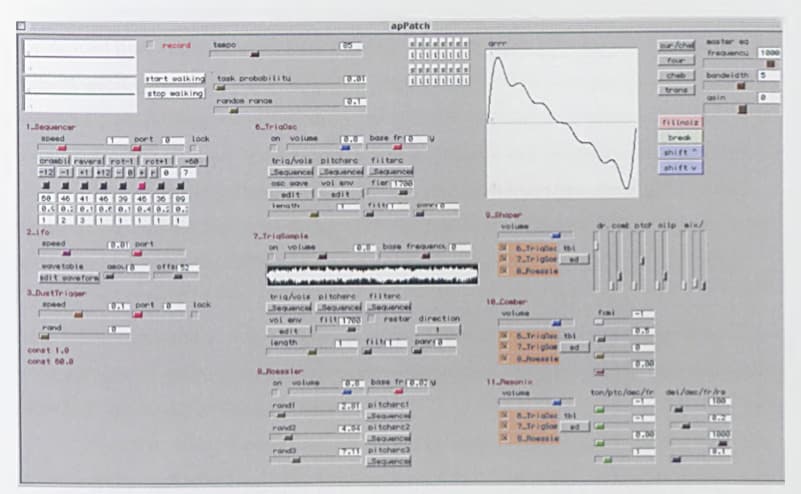