I’m wondering if CM can be used as a kind of sidechain processor, in a similar way as the damp circuit on the newer optomix. Not with my system for a while but I was thinking of rectifying a percussive signal (into slope, out of slope), inverting (into fade, out of right out) and then mixing this inverted signal with a drone and monitoring out of mac. Might need to go envelope follower after rectification? And on that note; @Galapagoose mentioned that the follow circuit is from arp 2600, anyone familiar with arp 2600 got any tips on what that function was used for to good effect? I’ve played with it quite a bit but tend to get a bit stuck, not being too familiar with envelope followers I’m sure there’s a handy use for it that I’m missing. Hope you all don’t mind me thinking out loud here, I’ll try and get that sidechain thing working as soon as I’m back with my stuff and post any results (or failures) here.

Here is an Arp2600 video where he uses the Envelope follower with an 808.

For a sidechain processor you would need to use the inverted signal with a VCA at unity, so the inverted envelope would reduce the VCAcv from unity in proportion to the size of the envelope. IIRC

Ok great. Makes sense, gives me somewhere to start from. In that video I know his voice was assigned to pitch via the envelope follower but it seemed to cut the tone, I guess the pitch was becoming too low or high for me to hear when he spoke (watching at work on a phone

three channels of random voltage from pam’s into OR, AND, and SLOPE, sync’d with the sequence [Dixie & Maths channel 1 through Optomix through Three Sisters].

Turning the sisters’ frequency CCW past noon to bring in lower stuff. Sisters’ quality is right on the verge of choir mode, which i think is what’s adding a lot of the soud that doesn’t sound like Dixie. As with all CM patches, I don’t exactly know what’s happening

@Galapagoose I know you are busy with the other new modules but wondering if you have a stock update for cold mac? I was hoping to pick this one up!

Signal sounds and cymru beats in uk have them i think (noticed when i was looking for some other stuff).

@adrianf if there’s a dealer you like that stocks them, couldn’t hurt to ask there. I know Control is expecting a restock of Three Sisters, like, todayish so depending on how that works they may also get some Cold Macs with that? Or maybe, because their Cold Mac stock only sold out a few weeks ago, it might be longer.

https://soundcloud.com/user-388295829/mutant-pluck sequence is generated by a korg SQ-1, sequencing a mutable instruments braids in pluck mode. quantized internally by ‘bees in the trees’ firmware. output through mannequins three sisters. the first ~35 seconds are the patch by itself, then i stack a few layers of the patch for something a bit denser. several channels of random from pamela’s new workout are running in time with the sequence at various divisions of the clock. random outputs are …

cross-post from latest tracks - cold mac is driving the train here! more info in the other post. the first ~35 seconds are the patch by itself, then i stack a few layers of the patch for something a bit denser. of course, after i put this together and posted it to soundcloud i though of 10 things i’d do differently, but it’s a start! i’m still very new to DAWs and manipulating recordings and trying to learn the ropes a bit. 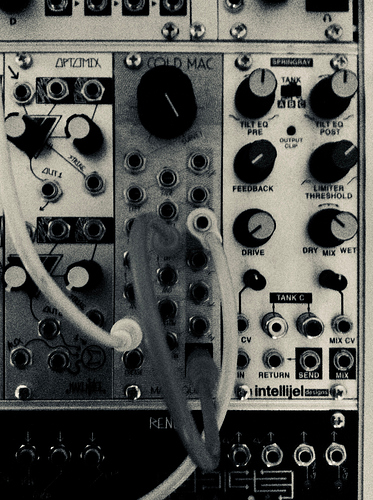 Anybody here done much patching with Cold Mac and MI Frames? I’m planning to add a Cold Mac to my rack and use that with Frames as a sort of central nervous system that ties everything together. If any of you have done some work with this I’d love to read what you’ve learned about their interaction.

Anybody here done much patching with Cold Mac and MI Frames?

Haven’t used frames personally but from my understanding of its function as a dynamic mixer it shares a lot of the potential of the RXMX which I’ve found pairs with Cold Mac wonderfully, especially when Cold Mac also influences the sound sources upstream.

This patch can be harmonic, noisy or chaotic, depending on how the Optomix parameters are set. If you leave out the input entirely, then Cold Mac and Optomix can be an oscillator all by themselves.

You don’t have to use Optomix, any low pass filter will do. Actually you don’t need to use Cold Mac either. Here’s a demo of some possibilities with a few different combinations of modules:

Thanks, great patch full of possibilities and nice video too!

monome walk momentary out -> CM slope in
CM slope and crease outs -> any 2 destinations. click the walk pedal to send simultaneous trigs via CM, regardless of survey knob position.