I was playing around with this patch more yesterday, and there are a number of possible variations to being able to sequence. One of the most wild was to put three sisters into the feedback loop between the Mac out and left input (instead of maths). You can then use different outputs from the three sisters to go into the left and right inputs for cold Mac. Add some self patched fm in three sisters, and you can start getting some very mad sounds. Sequencing can be done by the three sisters 1v/8 input (though I didn’t manage to try this with a sequencer per se, but used a quantised shift register output from the disting).

“if you don’t know why do you ask?”
David Tudor

Here’s a Cold Mac waveshaper patch that I recently created, I called it MacTimbre: 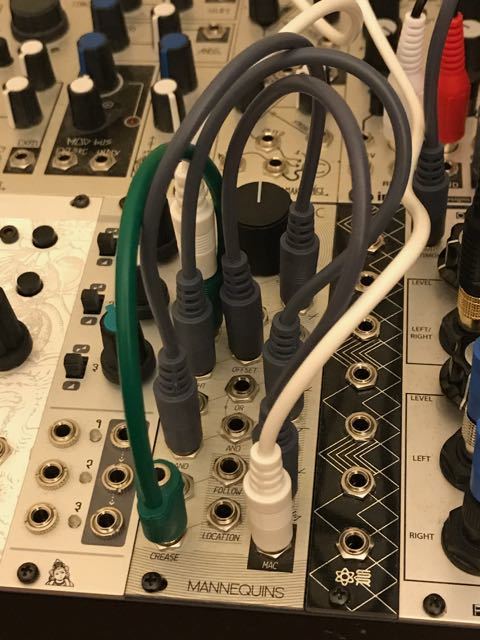 Moving survey from 0 to 12 o clock will affect the nature of the fold. Alternatively you can send an external DC offset into Offset In to get greater range. Fade in alters the amplitude of the wave before the folding occurs.

Hm, I think I found some sort of oscillation going on, but I just wanted to check my results against y’alls. I have:

I get the highest pitches about 10:30 and then it bottoms out about to clicks at noon.

You get a lower pitch base starting about 12:30 to full CW. With some really interesting mechanical clicks. Putting stuff into AND2 gets you some pitch/timbral changes. And there’s even more noisy goodness if you patch CREASE out > SURVEY!

This is sick I can’t wait to try!

Can Cold Mac be used as a simple wave rectifier? If so, how would I go about patching that up?

Input goes in the Slope jack, taken from the output that looks like _ / _ (I’m sure it has a proper name).

A yeah, I knew it was something simple like that!

also using the 2nd inputs of OR and AND gives you half-wave rectification in the positive or negative direction. This way you can apply different transformations to either half of a waveform…

Pretty sure you’re right this I’m afraid. The other thing is that it doesn’t perfectly replicate the original voltage so it’s not good for portamento type pitch work if that’s the kind of thing you were thinking of?

correct. it’s the envelope follower from the arp2600 which was fixed time response.

So I tried out the VCO ideas and I came up with some wicked tones mainly squarewave based.
If anyone wants to try it here’s the patch! 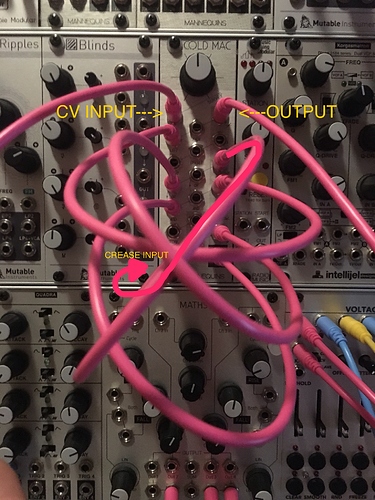 Not sure if it’s tracking 1v/oct properly but it does track!

Here is a video of a sequenced line coming from my metropolis to the survey in of cold Mac. Sound source is only cold Mac!

Sounds like a good chunk of bass in there too!

Heaps of low end! And while I was patching it up I came across a version that changed the pulse width depending on the frequency so it had a bit of a thinning hipass vibe. Very cool!

Digging the patch…feeding some Tides modulated by Maths and Sloth with some FM from a Spectrum into the right channel as a variation.

Awesome!
Have you tried to put a sequenced oscillator at audio rate into the survey? Crazy sounds.