Hey folks…I’ve got a few questions/need a few pointers regarding my live looping set up. The way its currently setup, works fine and i’m able to do what I need to do to perform, but I feel its setup a bit backwards with my mixer. What i’m trying to do is:

It works, i suppose, but essentially its turning the looper into the master vol. of everything, rather than the mixer doing so. I’m also trying to record my loop performances, and the way I currently have it rigged is not allowing me to do so.

I’ve posted two pictures to show my current setup, and a picture of the mixer to give you guys a feel of what im working with… 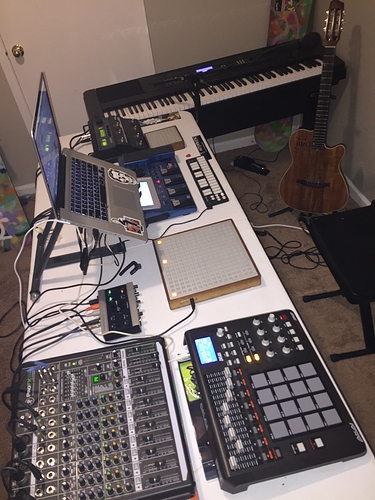 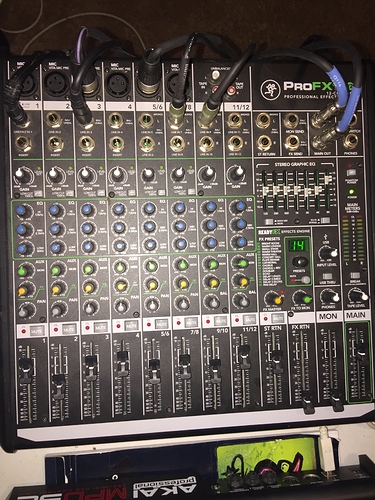 Apologies in advance, i’m a bit scatterbrained at the moment, but essentially I just want to get this all setup correctly once and for all. For years i’ve been setting it up a bit twisted, and I feel that the brilliant folks in this community might be able to point me in the right direction. I’d be forever grateful for your help!

You should use an aux send on your mixer for the looper.

Plug all your instruments in their own channel on the mixer, plug the aux send in the looper’s input and the output of a the looper in a free track in the mixer (better than to use the aux return as you get easier volume control and eq).

Then turn the aux send knob on any channel you want to loop… Pre and post fader behave differently, I prefer pre-fader for things like this personally.

As @oscillateur said. I would go with pre-fader, so you can control the amount of dry sound going to the master out and how much should be sent to the looper independently.

thank ya so much my friend! one more thing, looking at the picture of my mixer, what are the aux sends? i see the “mon” sendvand “fx” send, but im not sure where to go with the aux sends. Sorry, this mixer confuses me. Once I clear that up I think i’ll be good to go haha.

I used the “mon send” and kept getting phased out/distorted signals from all the instruments. A bit stuck with the sends…hmmmm…thank you guys again for the advice posted already, almost there completing this setup.

Looks like the “Mon send” is a monitor channel.

The FX send looks like where you want to place the looper then return via stereo retrun L/R.

This means you can use the aux FX control on your instrument channels to send you signal to the looper.

I think!! Never did live looping before!

You can use the FX send to go out to the looper, but this is post-fader. Also if you’re doing that, make sure you turn off the internal FX (FX Master) knob. The mon send should work, it’s a pre-fader send controlled by the MON AUX knob of each channel.

Thank you all so much for the replies thus far. I’ve got the idea of it, but for some reason I’m gettin phased out/distorted sounds from each instrument, with the volume all over the place too. Hmmm…

Maybe the looper can’t handle the level coming out? Have you tried different inputs of the looper?

I’ve tried the different mains of the looper, didn’t seem to do the trick yet.

I tried turning it down and muting it, still getting the phasing sound, and the volumes of each particular instrument are super low now, coming out even lower once the phrase is looped. ahh!!!

a phasing sound with a looper / Ableton setup is generally the result of an input being both directly monitored AND monitored through Live. I would guess you have your loopers set up with the Input > Output setting at something besides “Never”, while also having the input monitored either through the mixer or your interface.

If there’s a way to do it, could you please post a diagram of your entire setup? And if possible, find a place to upload your Ableton patch so we could examine it? I do similar stuff with Ableton all the time and am happy to help, but it’s tough to tell where you’re going wrong with the information provided.

I’ll try and figure out a way to post a diagram of the entire setup, I know the photos don’t really offer too much insight. As far as looping goes, I’m using a hardware looper, the Boss RC-300,. I’m not doing any looping in Ableton whatsoever. I’m mainly using Ableton for midi keys/drums etc…as well as using it for polygome/press cafe etc. with the Monome. Thank you so much for lending a helping hand my friend. Let me know if this clears anything up at all.

After noodling with my setup on and off for a while, I still haven’t gotten it quite right yet. Again, thank you guys for sharing insight and advice. I’m probably the one setting it up wrong as it seems like such a simple fix haha.

it really does clear things up. I would just agree with the others above in encouraging you to use the looper on one of the mixer’s aux send channels, making sure that no audio from the input to the looper ever goes directly to the output of the looper, though brief googling didn’t reveal whether or not that’s possible with an rc-300.

Like others said, I use the two Aux sends (post-fader) of my Mackie 1202-VLZ Pro to send all my sound sources - Eurorack, other synths/samplers, live bamboo flutes - through looper/fx pedals and a Eurorack sampler/delay. One Aux send (the FX Send on your mixer) goes out into my Eventide Timefactor --> reverb pedal --> back to the Aux return (ST Return on your mixer), and the other Aux goes into my Eurorack sampler Reflex Liveloop, and the module output goes into one of the stereo input channels so I can control the level a bit better. On that channel, the Aux 2 level is at 0 so its output doesn’t feedback onto itself.

I have the Aux levels on all channels, Aux Master and Return levels all at noon (Unity) position and haven’t experienced any clipping problems as long as I manage the individual input channel levels. And then everything goes out the main outputs of the mixer. I’ve had my setup for live performance many times and haven’t had any level problems.

For your set up, then, you’d connect all your sound sources (computer via Audio 6, TC voice pedal, Yamaha) into individual input channels. Connect the FX Send outputs to the inputs of your RC-300, and the outputs of the RC-300 to the ST Return, and you use the yellow knobs on each channel to control how much signal from each channel goes into the looper, and the ST RTN fader to control the level coming from the RC. If you’re not recording anything in Ableton and using it mainly as an instrument/drums playback, you’d just route the output of your laptop/audio interface into an input channel on the mixer into the PA. You want to make sure you’re not sending any audio back into Ableton with channel inputs and monitoring turned on in Ableton, which is where you might be getting distorted/phased sounds.

Thank you so much, that was very insightful and got everything running smoothly. Big thanks to everyone who posted in this thread for the help as well!

I don’t know how to hook all these up; in what order?

Here’s a flow chart I put together to show you how I think it possibly should go. But I run into problems when I try to record something i’m making with live looping into Logic.

I’m still trying to work out midi clock and where that should come from. Ideally I’d be able to use the set up without the computer connected too.

Will you let me know what you think?

One thing I really don’t get is what should be the master of the the midi clock? 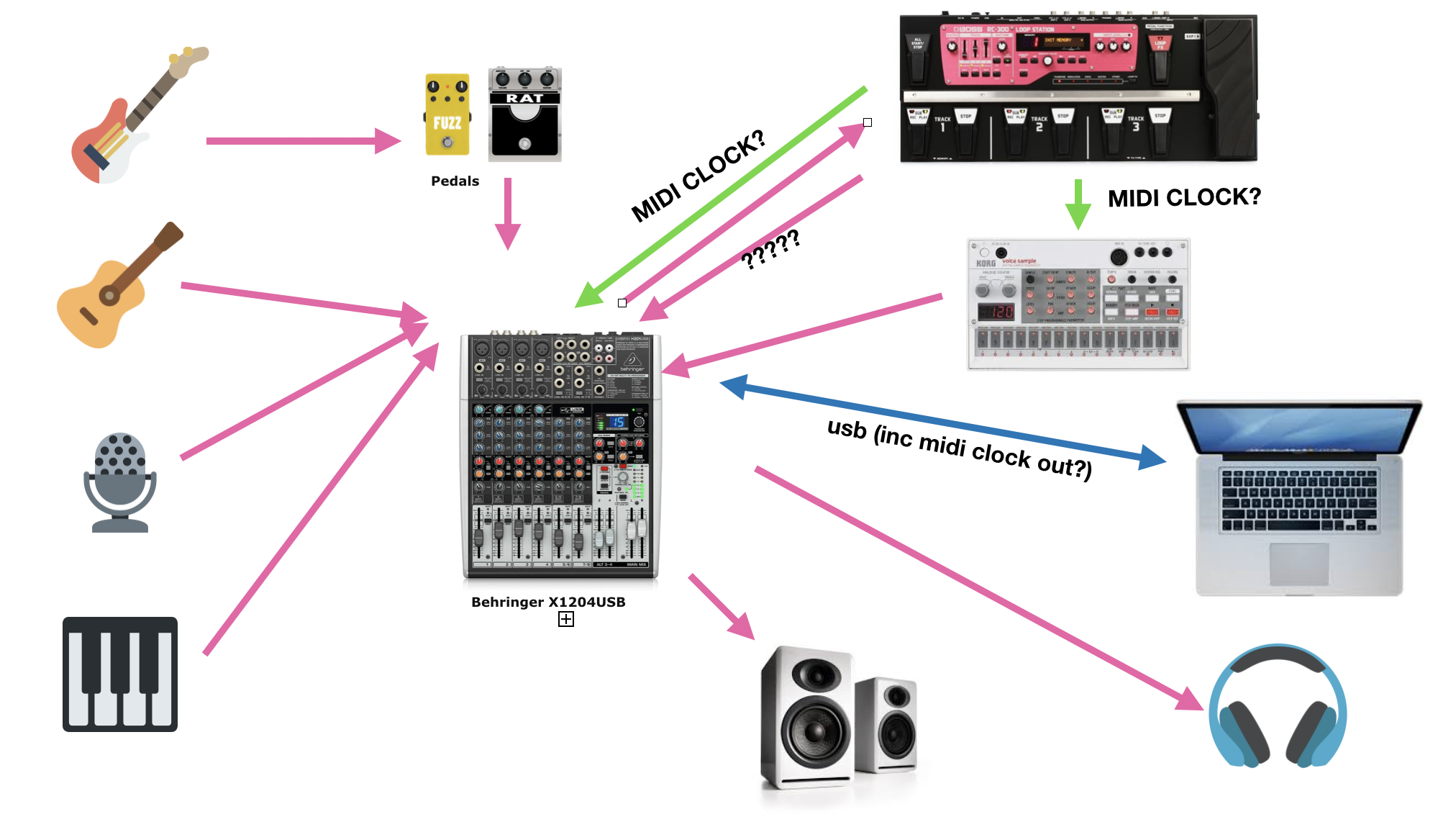 audio looks good, id probably setup the looper on the sub bus,
though, if you’re happy with mono, then you could aux send.

midi, the mixers usb is for audio only (mixer acts as a audio interface) it does not handle midi.

so you need a usb - midi din converter.
you can get a cheap single din one, then go
laptop -> usb/midi din -> looper -> (thru) volca

or get a usb midi hub, that has multiple outputs so it can go directly to both looper and volca
(id probably do this esp. as your synth might also want clock for things like sync’d lfos, or get midi sequencing data from your computer )

who is master? usually the computer/daw is master, then set everything else to slave.