Maybe a weird thread, but this is the only place where I feel I might get interesting replies…

Has anyone composed music with songbirds (finches, canaries, cockatiels, etc) before, or know of anything of the sort?

I’ll be moving to a new place soon and have been wanting a fun pet to keep. I’ve kept a varieties of things in the past (cats, aquariums, a mouse) but never birds - and it struck me that not only are they cute, but they also like to make music, just like me!

I was imagining maybe I could set up a large cage with a few songbirds in it, and set up microphones around it. Then I could sample the sounds birds make and integrate them with my synths. I hear cockatiels and some species can even learn tunes, so perhaps I could even train them to “perform” with me to some extent…

This is probably really crazy, but I’m really curious to read any replies to this.

On the classical music end, Oliver Messiaen was notoriously infatuated with birdsong and integrated transcriptions of it into many of his pieces. As far as samples go, I’m not familiar with any specific examples. If you want some listening examples, the Wikipedia is a good place to begin.

If you were to compare Mozart to a bird it wouldn’t be the starling. Possibly the wood thrush or nightingale, with their beautiful, haunting songs; or maybe the lyrebird with its astonishing ear for…

Personally, I completely agree with previous comments that birds do not belong in cages.

We named our farm “Birdsong Orchards” after the sounds of flocks of Red-winged Blackbirds that occasionally visit in large numbers. It’s a sound I remember fondly from childhood in Missouri, and I was delighted to hear it in our current Watsonville, CA home.

I have yet to use birdsong in a composition of my own. I should rectify that.

I like the idea of modelling birdsong synthetically. The project would need insights about the anatomy and physiology of birds’ syrinx - does anyone know of any similar projects / resources ?

The young male zebra finch alighted on the nearest guitar and bounced across the mahogany fret board. He stumbled on the high E string—it was harder to ...

I stumbled on this before. brilliant

Would echo the concerns of keeping birds caged. I have a friend involved in rescue/rehoming animals and the state of some of the birds she’s nursed is horrific. While she’s rehabbing them she uses a local school gym hall to give them space to fly, and when she is confident they return to her she flies them outside everyday.

Sampling in the field would be where I would focus attention.

Xoxos’ Oscine Tract VSTi (winner of the KVR developer challenge 2007) was a physical model of a bird’s vocal tract. The plugin is free now but perhaps of more interest to the lines reader is this page where he explains the algorithm: http://www.xoxos.net/vst/nature/birdsandinsects.html

Seems to be based on Julius O Smith’s research, particularly on the syrinx

i don’t compose with them but let them accompany me or am I accompanying them?

I’ll get some audio

I love this place

I went to the Céleste Boursier-Mougenot show at the Peabody Essex Museum. It was amazing.

(I came here to post a thing about Mozart’s starling, but @jasonw22 beat me to it. Strangely, I just learned about it yesterday in the new issue of Orion.)

i was just made aware of this incredible resource: http://cornelluniversity.tumblr.com/post/40770771576/worlds-largest-natural-sound-archive-now-fully we have hermit thrush in our woods near the barn. they make an beautifully complex song: http://macaulaylibrary.org/search?media_collection=1&taxon_id=11996184&taxon_rank_id=67&q=Hermit+Thrush

Keeping song birds in Singapore is popular, especially with old guys. There are little areas set aside in parks with rows of hooks to hang the cages where they hold competitions. I heard a lot of the birds are poached from the wild.

A few years ago I wrote this song about galahs and used recordings of them as a backing track.

My spouse is a birdwatcher and we often visit a wildlife reserve that has an informational sign with sonograms, which are printed spectrograms of bird calls. Apparently many birders learn to read these, so they are sometimes included in bird identification books.
http://www.fssbirding.org.uk/Images/chiffchaff02may09sonbird3.jpg
There are many bird sonograms available online. I imagine importing these into an application that translates images into sound, like Metasynth or Photosounder – perhaps first performing graphic manipulations on the images. It seems like a way to create the sounds of non-existent birds, perhaps with different results than working directly with audio samples.

David Jaffe composed a work that transformed vocals into modelled bird song using FOF synthesis. I created some Elementary Signal Engine morphs which go from Seagull to Dolphins and back. Wordpress “Elementary Signals” You can download the presets from there.
I’m about to release a suite in which one of the tracks makes a Harrier Jump Jet sing chirpy bird song. It will be released in next few days.

Messiaen though is the standard for birdsong in composition.

John Luther Adams’s songbirdsongs is worth checking out. He talks about it in the first episode of the Meet the Composer podcast. It’s been a while since I heard the episode, but I remember him talking about being influenced by birdsong rather than trying to recreate it. 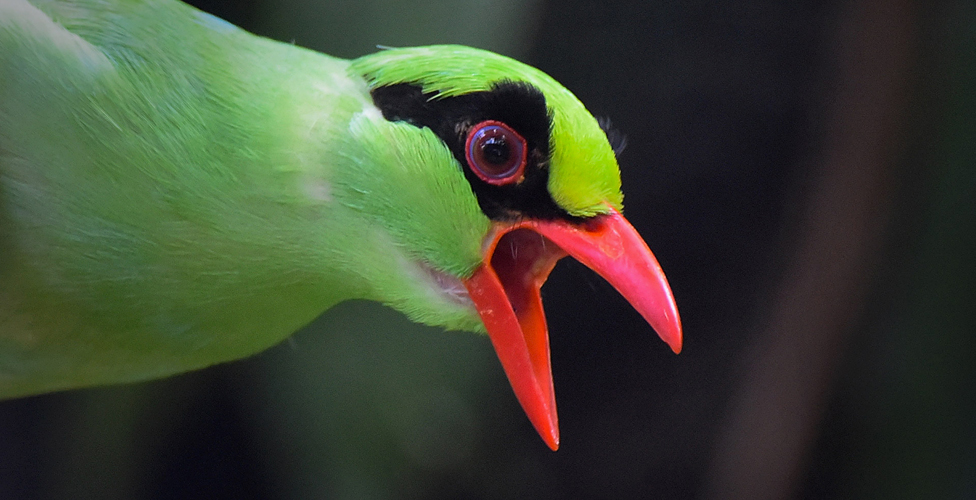 Sold for a song - BBC News