two variations on the same sample

patch based on @damon dcqlfo script

livecode duet between tt and compass

I’ve been listening to your Concentrics playlist this week and have been loving it (I’ll try to have something more interesting to say about them at some point later…). I find that that this piece is more active (for lack of a better word…maybe turbulent? agitated?) than most. Is that a coincidence, or are all those scriptable LFOs an invitation to chaos?

your script is a perfect utility and quite useful! (especially with the 2nd clock/cv-depth input)

this is an excerpt of perhaps 45mins i spent improvising with the patch…other passages are still quite active but the sequence can be heard unfolding in a more serene manner, perhaps more fitting for the concentrics series

but yes, i guess while trying to tame lets splosh feedback and wrangling the lfos this got wilder than the rest

haven’t tried in years tho

please dm or discuss here if loops, repetition, noise, duality/deception are thematic elements you are interested in

in true concentrics / lines spirit I want to pop in and share some notes abt the visuals I made for concentrics `` ``` cause I pushed myself to do new things for this project & it was fun ! 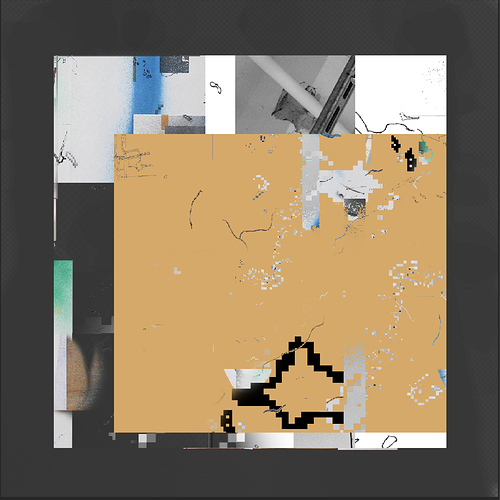 time and space travel are super essential to me in visual + audible art forms. about a year ago I started getting obsessed with the idea of trying to document a physical space over a set period of time. I built a multiple-media installation around a couple weeks of photos/videos/sound I made while exploring a random building at my school. 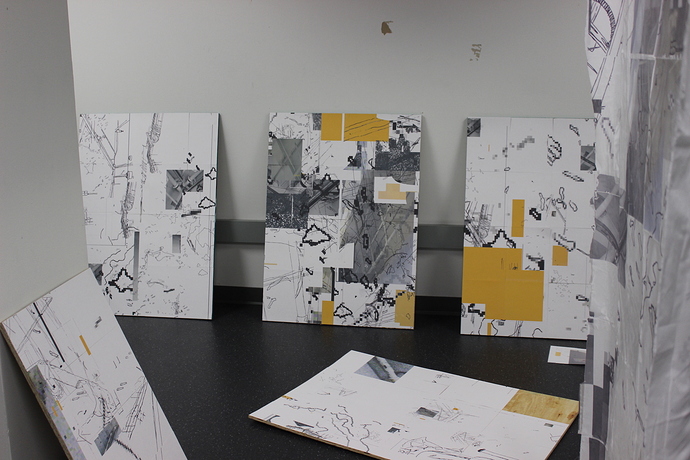 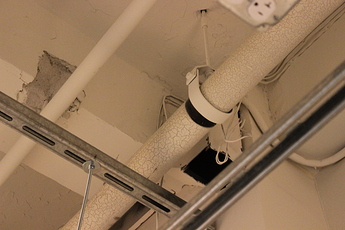 from there it was a lot of maker tracing / scanning / photoshoping the pics which were then run into a Processing sketch that made random collages from the pre-manipulated material (which also printed down continuously from a printer I hid up in the ceiling tiles during the show). all of these techniques kinda parallel looping sound processes I got into bc of monome and function similarly for me.

water is a really beautiful metaphor for the way that time and space interact non-linearly in this type of art / record keeping.

the bummer is though these prints are kind of massive and since then they’ve just been taking up space in my apartment which kind of bothers me as someone who takes material waste kinda seriously.

the more i think about it the more weird it seems but sometimes the source is a mystery to me too…as can be seen above i have a system for indexing digital files by date . where confusion starts is that if i revise the file in any way i rename it with the date of revision (with no additional data pointing to the previous file)

@glia got me hooked on the idea of recycling. when you start to sample finished work from your past, which is also has samples of other things, it starts to obscure the “” “original” “”" in a weird mystifying way that starts to feel like the work sort of emerged out of nowhere.

it worked out well bc after listening to the first version of c5 I knew I wanted to blast the beats and work on a large scale rather than sit behind a computer, and I figured there was no harm in ruining those big prints I had shoved behind my piano (+ I honestly had 0 money for art materials anyway or the incentive to use more up) 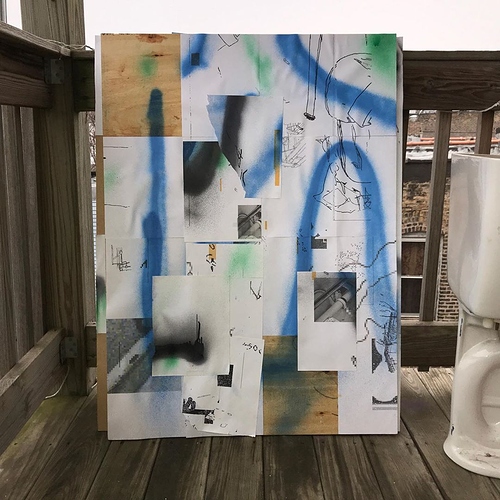 only problem was the aspect ratio was wrong and crops were kind of uninteresting - but it seemed to be in the spirit of the project to sample pics of this guy into another digital composition at a 1:1 ratio 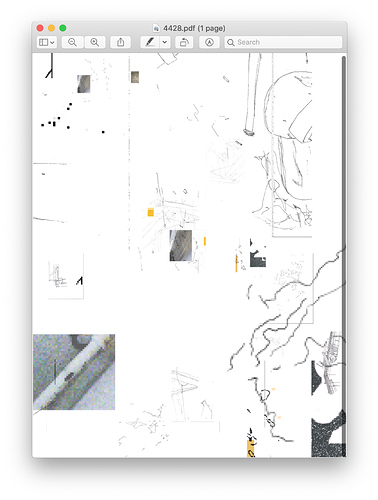 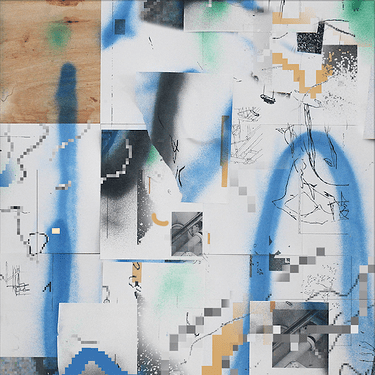 final image ended up being one of these discoveries, layered with another mistake I love where I miss a pixel with the fill bucket tool an cover an area I didn’t mean to 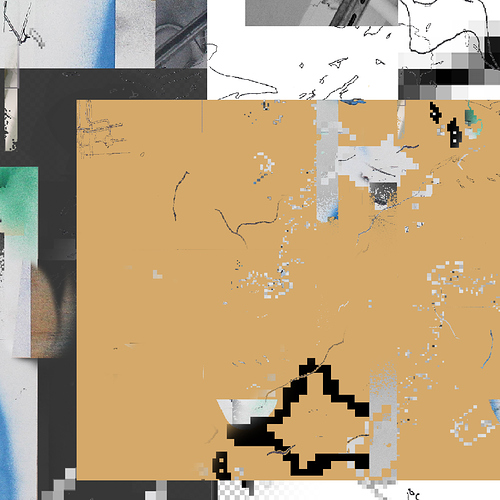 this is just perfect

Replying here @glia because it feels much more on topic ^^

One thing I did wonder was how you’d acheive the very noisy / lofi tones ? Is this through Prosody or is there some kind of hardware involved outside norns ? Maybe you shared more of the process than I know of so sorry if this is all repeating yourself for you.

Just wanted to drop in and say that Concentrics - the project as a whole, art and music - is wonderful. Congrats and thank you to you both.

(Would love a big vinyl cover

I’ll go through the thread later (I was put on to the record through @andrew ig and came cause of the title…no idea you were diving into it here) but anything you can share about process? record samples through norns scripts? Are there any live (processed) instruments? Thank you in advance.

Oh yeah and forgot to tell you @andrew without knowing you made the cover I just thought it was great, and seeing the process is even greater !

Through iteration, the project gets better and better—but I guess that’s the point, isn’t it?

hadassah/beleza: same formula . ableton with fx…i love the sense of confinement made possible with this combo

weighted/keys: op1 . collab with an offline friend who’d rather stay anonymous . he found + flipped a jazz sample then i added drums and arranged the beat > dubbed thru cassette

fig/enough: ableton . all tone/melodies from a live kaivo + aaltoverb improv session . drums were hand sequenced except for the ekphras hat smear

hoje/ontem: sp404 + logic . heavy use of roland dsp . autowah and bitcrush are the stars for this one . dubbed from cassette

glue/fringe: mlr + sp404 + logic . all but the two kicks were flipped within mlrv [max/msp app] . this is an example of the weird glitch/ratcheting hats that i still favor while using any looper [e.g. ekphras, norns]

…anything you can share about process? record samples through norns scripts? Are there any live (processed) instruments?

hundo/seen is the only track which includes live instrumentation in a more traditional sense [playing the drums and looped part of the session later on] . but the songs are full of one-shot drums culled from my music collection, my acoustic instruments, and sample packs i like [mostly lovibe or tuamie packs]

a typical beat of mine has at least two layers of drums mixed together…frequently i’ll pitch drums high, play a rhythm over melody into a resampling slot, then slow down the whole track [or vice-versa, pitch down drums, play slow, and eventually raise the global pitch/tempo]

how you’d acheive the very noisy / lofi tones ? Is this through Prosody or is there some kind of hardware involved outside norns ?

i’ll let andrew speak for me…

all the tools I use revolve around performing this process at multiple time scales (ms/µs = downsampling, seconds = delay/looping, days/years = sampling)

the other half rely on roland sp fx [mainly eq, autowah, bitcrush, delay] and cassette compression 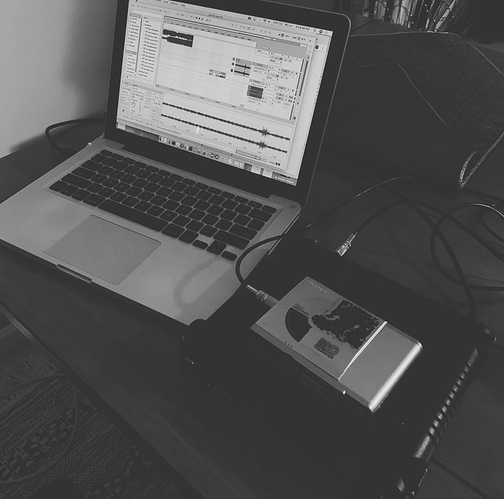 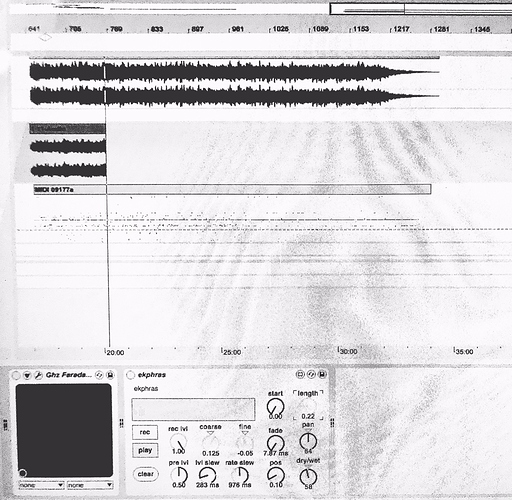 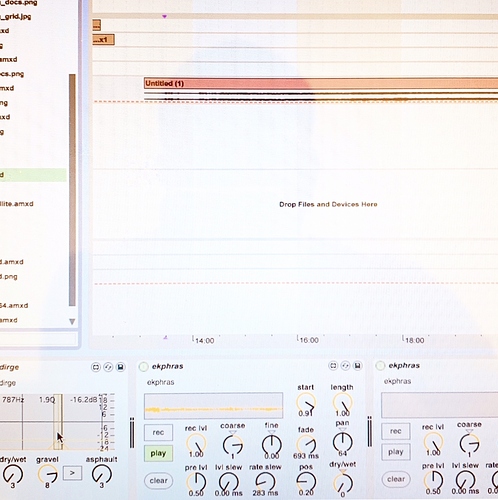 Love seeing/hearing/reading of your processes. Thanks for sharing.