Hello @Rodrigo, I built a few mint box buffers and they’re great, I usually use them with small cheap piezo discs covered in plasti-dip

I’d love to try your DIY Barcus Berry preamp but can’t find the schematic in this thread, could you post it or send it to me if you still have it? Many thanks!

Edit : Nevermind, I just found it on the web. I guess it’s ok to post the link here ? (otherwise mods can tell me and I’ll remove it) : https://tagboardeffects.blogspot.com/2017/05/barcus-berry-3000a-buffer-preamp-eq.html

Here’s a stripboard layout as well: 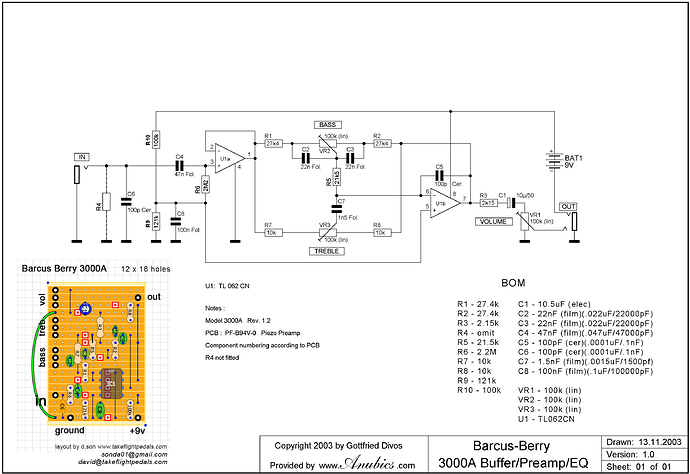 It sounds like a grounding issue. I’m surprised you’re using the Tonebone pre since the Marshmallow has a pre already, but I could see using it for tone shaping.

I think if you use the xlr + ground lift it might help.

I’m wondering if that is the case for all instances of using these kind of sensors, or just that particular one since it is a higher end model? My friend had basically made it sound like it was as simple as taking said sensor, wiring up something like a BNC/Coax/whatever it is to XLR, putting on the phantom and there you go.

will send you a PM of at least 20 characters

i never tried but personally i’d avoid put panthom power on them.

I emailed him, mainly to see when they would be available again (“a few months”) and asked about the battery and whether it was glued in.

Yes, the battery is glued shut. The datasheet said the battery would be good for 1000 charge cycles, so at the time I figured it would be good for 20 years of continuous operation, or basically your while lifetime if you only use it once in a while. Now I’m not so sure whether that is correct or not, and several people seem concerned about it. In the eventual future I might try to make it more DIY-sevicable, but not in the next production run.

Thanks for the heads-up, Rodrigo. I’ll therefor look forward to a lifetime of use. And if not, maybe they’ll let me upgrade to the DIY version by the time the battery gives up the ghost.

The red shrink-wrapped version’s preamp have a shockingly high level of gain.

yep ugh - just got mine with the expectation of mounting to instruments but unfortunately the gain is wayyy too high.

(anyone want it ? lol. think it was the last one for now)

I was initially going to post this in the 3d printing thread, but thought it was more relevant here.

Here’s a 3d printed mount that I made for holding a (k&k hotspot) contact mic under my hihat:

Towards the end I show the sound improvement using @tremblap’s HIRT. I’m going to create a new IR today since I bought another k&k specifically so it can just live in the mount and I think the frequency response of each contact mic is slightly different.

As a point of reference here is a clearer direct/mic’d comparison between the raw contact mic, an AKG C214 and then the correction of the contact mic through an inverted impulse response:

The green is the relative IR between the contact mic and the C214, with the black being the smoothed version of it.

The blue is the inversion of it, and the red is the gain-compensated inversion.

The output of that is then further convolved with a hipass filter to remove even more of the bass.

The red is the hipass filter, the green is the IR from the previous process, and the black is the convolution of both. All this really gets rid of is the boomy thumps when I do left foot presses, which the IR as originally inverted still leaves in.

And finally here is the difference between my previous k&k hotspot and my current one:

Subtle, but worth recreating.
(my C214 mic position might also not be exactly right, so that could explain some of the difference as well)

Do you have any of these recordings online?


then something (IIRC) buried in this release (even if it’s mostly hydrophones):

and other small bits buried in this album:

[not sure if the soundcloud links show up correctly]

Those sound really interesting. And that is the raw recording coming out of the charge amplifier?

“yedoma” release on Cyland: mostly hydrophone recordings, there may be a couple of sounds recorded with the accelerometer. everything there is unprocessed but the various sources are superposed + edited.

forget the last one (left.bank), it contains some sources recorded with the accelerometer but they are processed/granulated. (i shouldn’t have posted it)

I recently bought a contact mic from Pickup The World pickups as I’d heard good things about that. I’ve known that they are “regular” piezo film pickups but they are shielded nicely (whereas my DIY ones hum like bastards).

I’ve not tested the pickup too much yet, but I’m curious if anyone knows what this shielding/material is that is covering the pickup is? 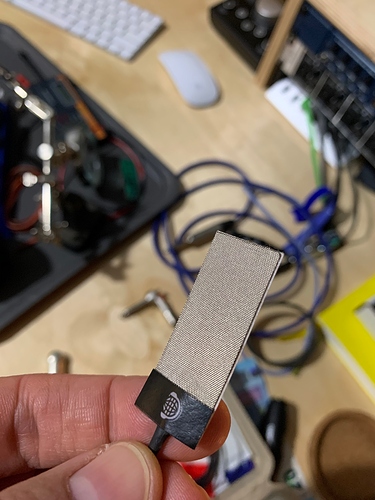 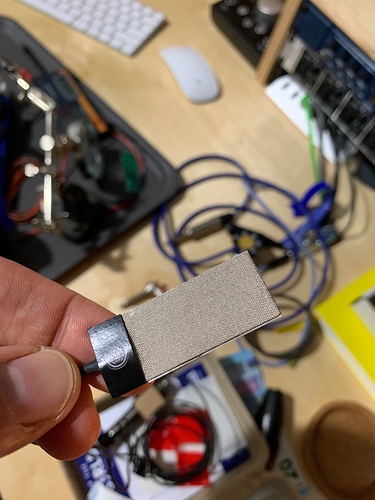 It’s textured and metallic feeling, like some kind of woven metal, but I guess flexible (and sticky?) so it encloses the piezo film.

Wondering if it’s possible to DIY myself some Pickup-The-World-style pickups from my piezo films (that have been gathering dust in a box for years!).

that looks like the kind that PTW makes for string instruments. i had one once, it was nice.

they are compressive transducers, designed to be used under substantial pressure, beneath a bridge foot. i don’t know what’s going on in the interior layers compared to the kind they make for low-pressure mounting directly on the body.

the outer material is metallized kevlar. might not be very DIYable…

I got the “Hand Drum” one, which after several emails back-and-forth with them was suggested to be a decent “neutral” one for mixed/percussive use.

The backside of it has double-sided tape, so I think this is meant for surface mounting.

the outer material is metallized kevlar. might not be very DIYable…

Hmm, as in like (nearly?) impossible to cut and/or to shield to/with?

yeah that stuff is hard to cut and hard to fabricate. its function as an excellent shielding material is compromised if the continuity of the weave is damaged. but i’m sure you could figure something out that does a similar job. (standard woven shielding tube, for instance.) if it’s not mounted under a violin bridge it wouldn’t have the same structural stresses.

even with the kevlar, my PTW developed severe shielding issues after some years of sustained use (bridge slippage / adjustment abraded the surface eventually.) now i use integrated pickups built into a bridge “saddle” or the body of the instrument, which feels more reliable.

Little question to those of you who use contact mics in a live situation. What are your strategies to minimize feedback / Larsen problems? So far every time I’ve tried to use contact mics live it has ended in a big feedback mess…