A local theater company has asked me to help them with the sound design of a new production they want to create. Unfortunately, because of the pandemic, they (probably) won’t have the option to perform it on stage and so they began looking for alternate delivery methods. Initially they wanted to go for a video recording, but after exploring that format for a bit the director felt like it would feel too much like ‘bad tv’, or a cheap derivative of the theater experience. So instead, she decided that she wants it to be an audio-only experience. Pretty ideal for me, as I feel it makes my role even more important. If things open back up, they want to try and find galleries/museums to ‘perform’ it as an installation.

Anyway, on to the question. I thought it would be nice to record this in a binaural/surround sound format, as it would give them more dramatic tools to work with by adding physical depth and distance. But, I have zero experience with making binaural recordings. So, I have a couple of questions.

Any input and mic recommendations are very welcome. I’d love to hear about your experiences.

I went down the rabbit hole of binaural recording after seeing the video below in 2015. What I quickly discovered is that binaural equipment is outrageously expensive. I did a bit of research and found that there are a number of diy options. What I experimented with was this 3D printed design I found online here. I printed it and used a dual lavalier mic inside of the structure I believe my mics are identitical to this kind. The 3D printed design works great, and gives a nice effect of stereo separation. I find it works best if you stuff the inside with cotton to avoid and cross deflection between the mics. I plugged the mics into a tascam portable recorder.

It’s a lot cheaper if you can access a 3D printer. I’d hazard maybe even still cheaper if you ordered the parts off a website like shapeways. At most you’d be looking at 100 dollars of 3D printed parts vs cheapest binaural microphone heads around 600-700 I’ve seen online 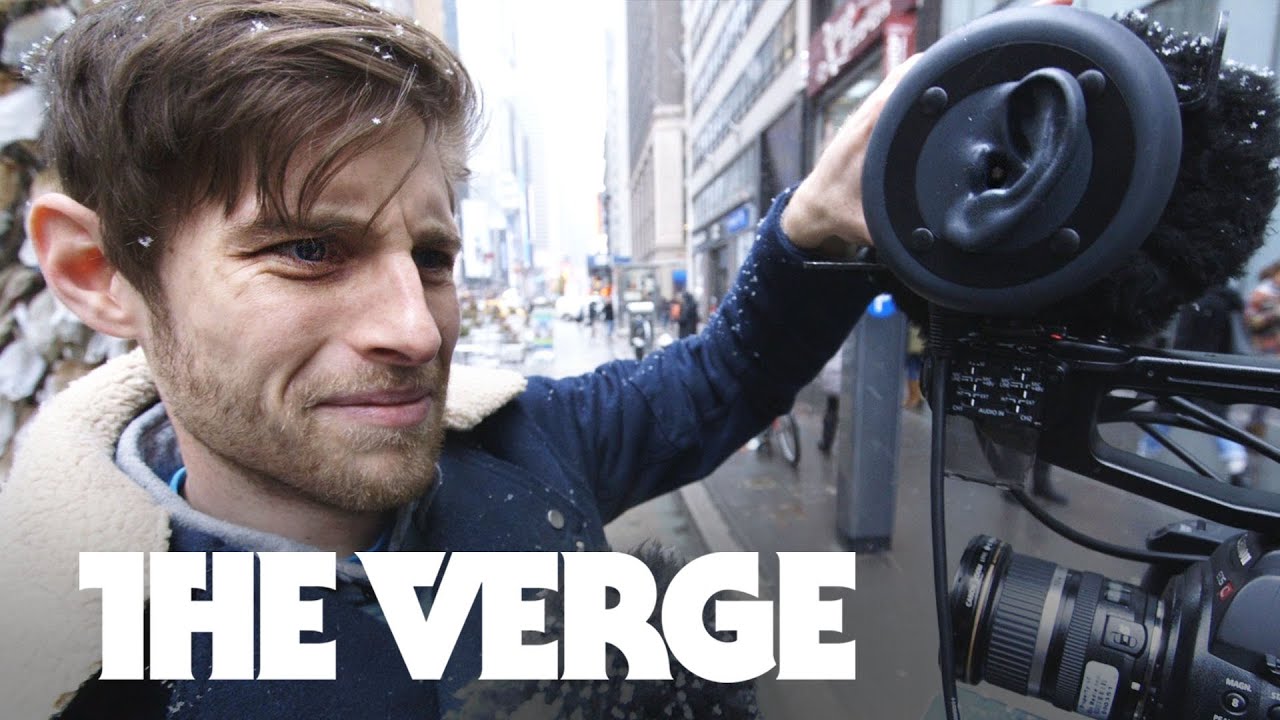 Looks like there are a couple of good in-ear products that have come out since I built my binaural microphone (check this out) the SP-TFB-2 seems like a good choice. But I’ve never used it. Main disadvantage is you’d have to stand around while the performers do their thing.

The Neumann is the granddaddy, but not cheap. Does make incredible recordings though.

I’ve always wondered if I could do something similar with my KM84s and a Jecklin disc. I should give it a try…

Oh cool, those are great resources, thank you very much!

Since it’s for a project, I might consider renting the microphone for the recording sessions, if that would increase the quality dramatically. But budget is fairly tight, so going the 3D printed route might not be a bad idea. A friend of mine has a 3D printer I could probably print this with and I think I already have some microphones I could use for this solution (maybe with some adjustments). Seems like a clever little design!

The sennheiser ambeo headset (which is now discontinued and can be found for 80 usd) is much higher quality than it has any right to be at that price point. I’m definitely impressed with the quality of the surround sound nature of the recordings it makes especially. You can find some info about it on this forum and examples by searching. It seems you can now record to a laptop using an adapter if you don’t want to involve/don’t have an iPhone.

If that works, it sounds like a good choice as well. Would love to know how you get on with it.

In your experience, does the movement of the person wearing them influence the recording a lot? Does it pick up a lot of ‘movement’ sounds and such?

I don’t know if you will be adding any Foley, but Mutable Warps alternate firmware includes a convincing Doppler panner allowing you to place and move sounds in the 2D plane. Would be really good for cars driving by, for example. I bet there are plenty of software alternatives if modular isn’t your thing.

the Core Sound binaurals are not as expensive as the Neumann.

Thanks for the rec! I don’t think I’ll be going modular for this, though. But if I do, I will probably re-amp it in the performance space.

I made a DIY version years ago with a set of silicone acupuncture training ears mounted on a custom laser cut mount (this was nothing fancy, you could easily build the same thing out of wood) that put them at head distance apart. I used a 1/4-20 camera handle to hold the rig. I used some frog logger capsules at the time (which I don’t think are available anymore), but I’m sure you could rig up some usis, clippy mics, or some primo capsules to accomplish a similar thing.

I’ve seen versions where these are mounted on/in foam heads, but I always thought that they might be really light weight and need to get around handling noise in some way.

the 3d printing option that @dianus mentioned above might be the best contemporary way to do this. I made mine pre consumer accessible 3d printing, and that’s probably the route I’d go now. But, if you dont have access to a printer or time to wait for a service like shapeways, There are ways to do it without!

Here’s an old pic of it mounted on a camera rig: 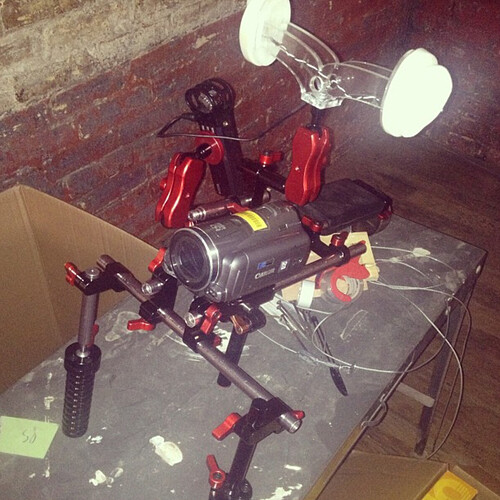 edit, I didn’t see your very specific questions when I first opened this thread:

Should I get special ‘binaural’ microphones? Or would using a matched stereo pair in an ‘ear’ configuration already be good enough?

It will work, but good enough is case dependent. do you ever need to record where you are not getting walking / human noise in the recording? Do you want the audio to be independent from the video and remove human noise?

If I should get these special mics, would it be better to go for the type with a fake head around it? Or the in-ear kind so that I can monitor the recording in real time? Something else entirely?

In my experience, monitoring isn’t really necessary, just set the levels and go. That said even with the head you can always monitor with headphones separate from the head/external mic. This is actually nice because it presents a kind of disembodied experience which is kind of nice to confirm that everything is working as it should be.

Are there any other challenges to creating these types of recordings? Any downsides I might be overlooking?

In my experience, and someone correct me if I’m wrong, just go for it. you might not get something quite as compelling as the NEUMANN head with a DIY or in-ear version, but in my experience it’s still really compelling!

It influences a binaural recording a lot as that is exactly what it is designed to capture. The shape of the ears and head of the mic or the person wearing the mics is what gives the sense of spatial placement and localisation. That is where the difference comes in compared to regular stereo mic techniques. It’s also not a question of quality difference between stereo and binaural, they are very different in their aim. Stereo is meant for stereo playback generally speaking on loudspeakers or headphones while binaural is meant for headphone playback only. Both are spatial but binaural is meant to capture sound as we hear it in space while stereo is meant to sometimes approximate that but mostly to create a stereophonic playback of a sound.

Yeah it does. Natural micro movements not so much but if you turn your head it will definitely change where the sound sources are coming from in relation the mics. If you need a more reliably static listener position it might be better to rig something up to put them on

Thanks @louwrens and @jlmitch5, I understand the purpose and that turning ones head would change the directionality. What I meant to ask, is how sensitive the mics would be to movement. Say, if I were to lift my arms, how sensitive would it be in picking something like that up? Or say, a tummy rumble that normally only I would hear.

Ah that is a good point. Your breathing might be audible from it during super quiet moments. Seems like this might be better for rigging something together with a mannequin head or something like that

I would like to second the Sennheiser AMBEO recommendation. A friend who has some experience recording with a Neumann head was not super impressed with them, but to me, they sound incredible. That something that costs thousands sounds a little better is not really a knock on them. And they have a better noise level and resistance to movement noise than any of the Zoom or Shure devices that plug into iPhones.

It can be had around here for 40€. At that price I would recommend it to anyone who is even a little interested in binaural (or just wants active noise canceling in-ears that sound pretty good tbh).

If renting the Neumann for the production is an option, I really like the recordings coming out of that too. It might be a little more practical than having someone wearing a headset sit still for hours.

the other option here is to create your own ambisonic mix, which might allow you to accentuate things like depth more dramatically and more effectively.

it’s much more labor intensive on the back-end, but all you’d need are the individual recordings, so you don’t need anything special for recording.

Not cheap by any means but I’d highly recommend an AEA R88 Blumlein ribbon mic. By far the best mic I’ve ever used to capture what I hear.

Is binaural recording a good choice here? Because if you’re turning a theatrical production into a radio drama, there’s a lot of other factors to consider. Normally, actors in theater productions have wireless lavs, and with a binaural rig, you’d need to tailor the blocking around your mics. Not that it can’t be done, but the actors would need to be trained to do it well. How about editing dialogue? When an actor flubs a line, and you need to replace it, a binaural recording is going to make that much harder. What about foley?–binaural mics are going record some natural foley and ambient sound–it may not be suitable for the story. Just points to consider.

If this is all experimental, it may be be fine. If it’s a straightforward drama, I’d lean towards individual micing of each actor, and doing the cool stuff in the mixdown. There’s some good resources on producing radio drama out there.

It would be cool if you placed the binaural mic in the audience of the theatre. You could have other actors sit around it, quietly whisper, cough, check their cellphones etc. for the full effect.