I’m having some trouble finding info on how I might send asl info to my crow in real time, was wondering if someone could give me their two cents;

I’m using less_concepts and want to use output 3 and 4 for LFO’s (not sure if they both can handle that, someone can correct me on that too). In i2c JF mode, the norns script has left the outputs free.

What would I need to do to assign an LFO to those front crow outputs and could I do that in real time without having to alter the norns lua script and relaunch it? Could I add the asl lines to the maiden command line? What would be a example of that?

My dream would be to use a TT command to just hijack those outputs through i2c, but from my understanding, that’s not possible yet…

Could I add the asl lines to the maiden command line? What would be a example of that?

for sure! this section of the norns crow studies should get you there. once you find the lfo settings you like, you can add them to initialize in less concepts when the JF option is chosen by placing the ASL commands + their corresponding crow.output[x]() calls here.

My dream would be to use a TT command to just hijack those outputs through i2c, but from my understanding, that’s not possible yet…

not yet, but I believe on the roadmap!

also, if you have any feedback about how to have served up those docs while you were searching for info, please let me know either here or dm. thanks so much!

Thanks, I’m going to hopefully have a chance to make it through the studies tonight. Been squeezing in crow time where I can. Been insanely busy and when I get to my setup I just wanna makes noise.

you can add them to initialize in less concepts when the JF option is chosen by placing the ASL commands + their corresponding crow.output[x]() calls here.

So, all in all I need to add LFO concepts to the script as an initialized function? Could I use both outputs 3 and 4 as LFO’s? I can’t inject it in real time (similar to how the live type might work on a teletype)? If so, that’d be something I’d be extremely interested in having in the timeline either through the maiden command line for now and hopefully through i2c communication with the teletype (oh how I wish I learned more programming!!!).

As for thoughts on the documentation, I’ve had a ton of thoughts about this over the last few months when driving back in to the monome scene and would love to share them! I’ll DM you for that to keep things relatively brief.

Gonna go check out the studies in a bit though. Thanks

I can’t inject it in real time (similar to how the live type might work on a teletype)?

you totally can! I wasn’t sure what your ideal use case was – you can either initialize through the script or through maiden’s command line. the commands are the same, either way.

I’ve had a ton of thoughts

dope! a lot has been shifting and gettin’ shaken up, so I’d be v happy to hear from fresh eyes + minds! looking forward to it

So it all seems fine on my end, not sure what the issue could be. The only time I get the unstable clock is when I change around the bpm in Awake. Once that happens I readjust the ppqn and all gets back to normal. I have noticed that no matter what the clock is coming from Awake, the best ppqn is 4 on Pams. Not sure what that’s about, I don’t totally understand what is going on. Another interesting detail is that the bpm is always one less on Pams vs Awake 9 (i.e. if Awake is 91 Pams says 90).

I’m not sure either. I followed your tips and did an update in Pams firmware and it all seems to work as expected now. However I’m getting the same bpm issue, it doesn’t interfere on the sync though. I think that’s how it is with Pams. Thanks for helping me sort this out.

Sorry if this has been covered, I scanned through but didn’t see it…

Is there a way to get JF out of i2c with Crow/Norns so I can use it some other way (Sequenced by Ansible maybe?) ? Currently, as far as I can tell, I have to power cycle my case. Or should I just hook up Ansible via i2c as well and then I can control JF still that way? I haven’t explored i2c at all aside from with Crow.

get JF out of i2c with Crow/Norns

You should be able to use ii.jf.mode(0) (or on Norns I suppose crow.ii.jf.mode(0)) to leave Synthesis/Geode mode and return to JF’s normal behavior. This is kind of covered in Just Type documentation (which is phrased in terms of Teletype ops) rather than anywhere crow-specific.

Anyway not using a keyboard?

Meant to post this earlier, but yes as of this build (2ab892a) Ansible will shut off Synthesis/Geode mode when you disable Just Friends from the leader mode settings on the preset page.

You could have a Norns script set up to toggle this based on a grid button press or midi event. A goofier idea: have a crow script toggle the mode when a certain CV input is received. Say, less than -3V if the script normally ignores negative input voltages, or maybe a particular “knock sequence” where you wait for the input to cross 1V, then -1V, then … you could dial it in manually on Cold Mac almost like opening a combination lock

That combination lock idea is amazing!!!

Is there something planned or in progress for connecting one or multiple TXo to Crow ?

Anybody have issues with a very loose mini USB port on the crow? From day one is has been really easy to knock in to my USB port and cut all connection. If not, I’ll put a call in to the monome crew; but was generally curious what others experience has been.

Yeah mine seems quite loose too. Maybe a different cable would help?

A little advice here. Please be careful when moving tangled cables in a tightly packed case. I managed to rip off the I2C header together with three pads. It should be fixable. However, it won’t be a very stable permanent solution.

If there will ever be a PCB revision, it would be nice to see a though hole 6pin header there. The 10pin power header seems stable enough though. 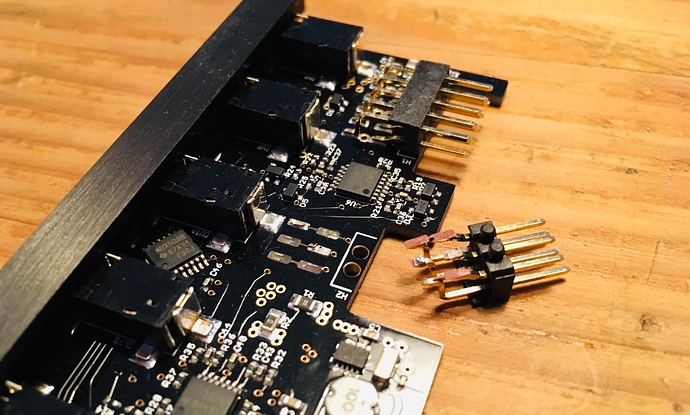 Sorry to see this! It’s the first time I’ve seen it in a very large number of W/ and Crow modules in the wild. Originally I wanted to use a through-hole header (they are much cheaper for a start!), but they all violate the 2hp width limitation.

We should be able to get this back into working order if you’ll send it in! Email service@whimsicalraps.com to arrange.

Yes, it was a rather unfortunate accident. I was untangling power cables and pulled on one, which was entangled with my daisy-chained i2c ribbon cable a few modules away. Didn’t see that coming.

they all violate the 2hp width limitation

We should be able to get this back into working order if you’ll send it in!

Thanks, but I’d prefer to avoid sending it half way over the globe again. It shouldn’t be much work. There are still two pads left and the vias are close by to tap on to. Already contacted help@monome and Brian said super glue should hold it in place pretty well

Are chainable Crows, like one Crow as a leader and others as followers via i2c on the roadmap?

I have a project idea that would be cool to do via Norns and some Crows (instead of with say, Max and expert sleepers) but it would require a fair bit of i/o, and right now with no equivalent of TXo/TXi there are limited options to expand the CV ins and outs.

Yes it’s already working on the dev side, we’re still finalizing the syntax for how it should work though. It can get confusing so we’re working on different ideas to make it clearer. See this git issue if you have ideas that could help.