This is very nice.
I know we are talking conceptually but:
Could one control the A and B return volume levels?
Does the main volume pot allow for gain of low signal levels as well?

minimal as in “small” can’t happen magically: the current sketches ate impossible due to mechanical space requirements. 1/4" jacks eat space (ask yourself why norns has a large void at the top… i do value negative space, but the jacks were a major design constraint)

also having an IEC plug with internal power supply is a big ask: tons of large components are needed for clean power.

I figured as much. Just to ground this a little bit more (I imagine there’s plenty of impossible things hiding in the sketch), is the reference point of ~32mm from the rear of norns to the first knob/button a fair guidance for clearance?

If so, the design above would need to grow a tiny bit, but less than an inch. I don’t think an internal power supply is a must-have either.

edit - I should point out that the thing I’ve made isn’t really all that tiny (determining scale from the sketch is not the easiest). It’s roughly 11.5" x 7" (7.5" with more clearance for the jacks), so much quite a bit larger than a grid.

Personally I would be very interested in the electronic design side of things. I’m not a electronics engineer in any way but I’ve done lots of synth DIY and also learned a little PCB making skills along the way.
I know there are a lot of (open source) mixer schematics online not the least some very good ones from e.g. Mutable Instruments. In the most simple version it’s just some resistors with 2 opamps.
But there is always the issue of power supply that needs to be very clean for an audio mixer.
I’ve been wondering for a while if these kind of devices make a simple clean power supply solution for a mixer.
https://www2.mouser.com/ProductDetail/MEAN-WELL/DPU01L-12?qs=5aG0NVq1C4zMaeVnCi%2Bd1g==

it’s a slow morning here, so I did a very cursory 3-d model of my previous sketch using mostly primitive shapes. size is 300 x 200 x 55mm. 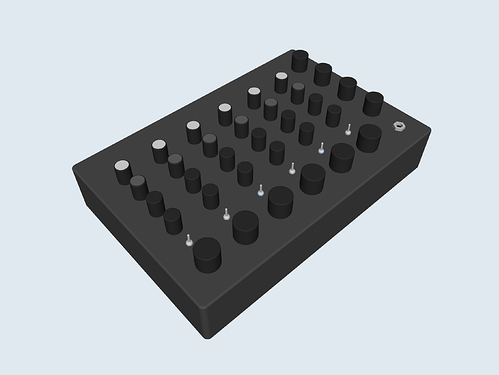 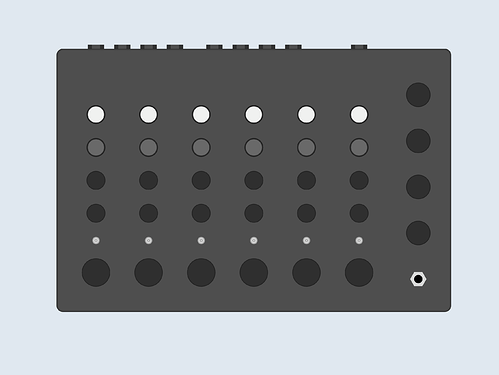 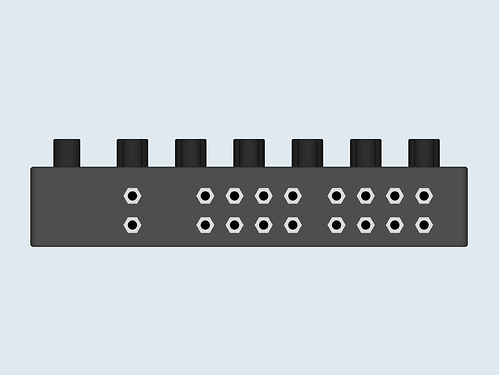 curious on people’s thoughts on the size. is this too big to be minimal?

I think fundamentally, many of us might have very different opinions of what a “minimal mixer” (tossing a nod to the originating thread) is.

Agreed, what i’m seeing is the desire for 3? different mixers. One quadraphonic, one “dream/feature perfect” and a “minimal” …

Wondering if this minimal idea just means to some: Aluminum with black knobs and minimal labeling? (meaning no offense, I

the monome design aesthetic, and that would factor into my use a mixer)

This seems like a good idea to me… Everyone is going to have different needs… Minimalism requires ruthless prioritizing of features, be they technical or tactile. Fewer, quality, focused ideas, deeply designed… Once the technical feature set is agreed on the industrial design crew can work to organize those into a useful/fun/expressive layout.

Thanks for the quick turnaround!

After further thinking about it, I can’t help to notice that having 2 stereo sends but no stereo returns which means having to use the 2 full stereo channel strips (or 4 mono channel strips!) as returns feels unbalanced to me.

So if space allows, I’d suggest to add 2 stereo returns, each with just a level control on the main surface (small rotary knobs in the top row?).

there’s stereo return jacks on the box, I think the question is if you need a return level control or if you can manage that via the send level and on the send in question.

IEC plugs are really big indeed, but maybe using a figure-8 connector might make it acceptable.

As for keeping the power clean, what about a pcb-mount AC-DC switching converter, cascaded with a linear regulator, that’d bring you the best of both worlds, and you get to keep the “just-plug-it-to-the-wall” attitude.

But yeah, also USB power is inviting, as usb chargers are quite ubiquitous and cheap nowadays…

you can make the internal psu compliant to the 110-250vac range, an external brick is not strictly necessary for the sake of that

Maybe people already know this, but with all the talk of a modular mixer it would be worth keeping in mind that almost all pro mixing consoles are modular and have been since the 60s… each channel is a separate module that attached via a card slot or ribbon cable, and often there are sub-modules for things like EQ, aux sends, busses, compressors, etc.

If you want to go down this route it would be worth looking at those designs to see how they do it.

Oh, sorry for the oversight, my bad.

…I think the question is if you need a return level control or if you can manage that via the send level and on the send in question.

I’d rather have return level controls so that I can

How about a tilt EQ on the master as well, but with different frequencies than on the channels? This way 2 return level controls could be fitted.

has our dream day finally arrived?

@brndnwilliams & I have been discussing the “perfect” mixer for electronic production for a long time now.

The only thing I see missing is a separate volume for headphones. I had a tape deck that had fixed volume headphones and it was real annoying In practice

By way of example, this is the Schertler Arthur modular mixer:
https://secure.schertler.com/en_IT/arthur

Thanks very much for the size comparison to norns. This is indeed quite larger than I expected.

Could the distance between two norns encoder (which I think is quite ergonomical) serve as a “grid” to place the mixer button in and then see how small it can get?

the distance between encoders 2 & 3 on norns is 25mm, which is the vertical distance I have set for the smaller knobs on each channel. the lateral space between each channel works out to more like 40mm (between the small knobs).

personally, I like the visual distinction of having more space between each channel than within each channel. if we’re going with a minimal aesthetic, that visual space is going to be helpful for legibility.

maybe more importantly, I really like having larger radius knobs for the main levels. my reference was the x-large knobs used on the mannequins modules (without the taper) and losing horizontal space will make those really crowded. I worry that doing a knob mixer with tiny mix knobs might kinda suck with extended use.

curious what others think though. I can probably play with dimensions a bit, but I don’t think it’s possible to make the thing dramatically smaller by shaving mm per channel.

This thread got my imagination going - how much mixer could you fit in the size of a grid. Had a lunchtime speed model to visualise it! 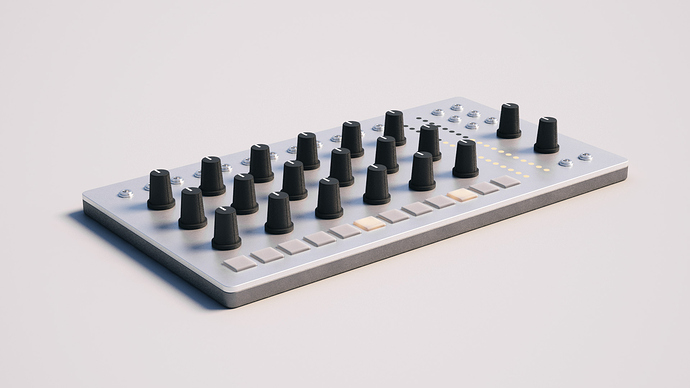 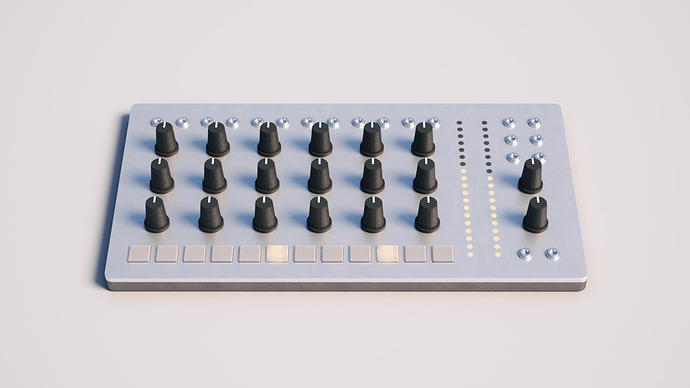 Disclaimer…I have absolutely zero circuit design knowledge - I guess this absolutely would not work with the amount of circuits needed. I guess if it was much deeper and had an external power supply…anyway, it is simply a visualisation of what a Monome style mixer could be in a dream world!

I like this size. This is quite a bit bigger but it’s kind of reminding me of a modern version of these old suitcase/portable mixers…maybe because it is in landscape orientation? (the neve 542 came to mind, there’s some that are tighter). Do we have room for some analog vu meters

maybe more importantly, I really like having larger radius knobs for the main levels. my reference was the x-large knobs used on the mannequins modules and losing horizontal space will make those really crowded . I worry that doing a knob mixer with tiny mix knobs might kinda suck with extended use.

Love those knobs for this purpose. Perfect!