DIY’ers building Cyberdecks is something I first noticed, a few years ago. It looks to have evolved from a one-off homage, to a trend, and now the beginnings of a proper hobby.

This seems to be a confluence of many things. Single board computers, PCB design in the mechanical keyboard hobby, 3D printing and laser-cutting, and the proliferation of cheap lipo batteries and OLED screens. I see many parallels in this pursuit to Modular (Teletype speaks to me in this language) Even on an ideological level I think it expresses a growing discontent with authority and trying to make Gibson’s cyberspace anarchic promises real.

I’m curious to see where this goes! I see it growing beyond a nod to cyberpunk. And I wonder how this can be used for music! Maybe the macbook concert won’t be a staple in the future? SBC get more powerful with every generation.

You want a good project that combines multiple disciplines, gives you something useful in the end, and will certainly wow the muggles? Or do you simply need a custom rig with which to “jack i…

Building Internet-connected things seems obvious today, but what about when there’s no Internet?  The concept often feels like something out of a science fiction movie or a doomsday prepper’s handbook- and while this device can work in both...

I am so here for this. There is a coming intersection of cyberdecks, VR/AR, live coding, and music. It is going to be incredible. Let’s help make it happen.

I love the cyber deck stuff and the ethos behind it! I’ve been planning a double norns shield in a cyber deck type case for a little while (which is not what you’re describing except maybe on an aesthetic level, but still). I feel like the cyber deck represents another form of truly specialized object, not a general purpose “Do Everything” machine like the laptop has mostly become. They can become peculiar, weird, suited to the needs of the individual and nothing else, kinda like the Norns. There’s value in having an inspiring device for its own sake, even if it is just a Raspberry Pi under the hood.

Even though the aesthetics of the cyber deck is what initially attracted me, I find a lot of value in the idea of having computer hardware that’s not controlled by a massive corporation, and that is customizable, hackable, and ultimately not defined by anyone other than yourself.

This is exactly what I was trying to get at. I think the specificity of this as a hobby is what really grabs my interest. Need a cyberdeck for SDR, sure? Or as a norns platform? or survivalist LORA communicator? Whatever! All of those things are possible.

I think one of the arguments in favour of this vs continuing with mass-produced laptops, is if there is a co-operative open-source cyberdeck movement your computer will get better over time instead of becoming obsolete. Sure case-modding existed before this idea, but it was reliant on the supply chain of graphic, sound card, case manufacturers etc. Now all the vitamins are in our hands, and like the vibrant community that has collected under open-source modular/synths gear, it’ll improve steadily over time.

I think it’d be cool if people started to make “musicdecks”, like cyberdecks but with built-in audio interfaces and musically relevant control surfaces. Like a bespoke Organelle or MPC Live.

I like this idea. I’m very disillusioned with the current wave of laptops, so would potentially be interested in building something like this as a proper laptop replacement that can run a full linux DE. Maybe with a Udoo Bolt V8 as the heart and a Tex Yoda II or Tex Shinobi for input (integrated trackpoint). Then there’s a whole host of small and portable USB-C monitors that could fit the bill. Would just have to build everything into a suitable case.

paging @Hlp, who did this with their norns shield

My dream “musicdeck” would be something like this. It would have has the same I/O as norns, run Max, and would be compatible with VR goggles so that I could patch Max in 3D (somehow). Also integrated CV I/O. Also room 20HP. Also HDMI out. 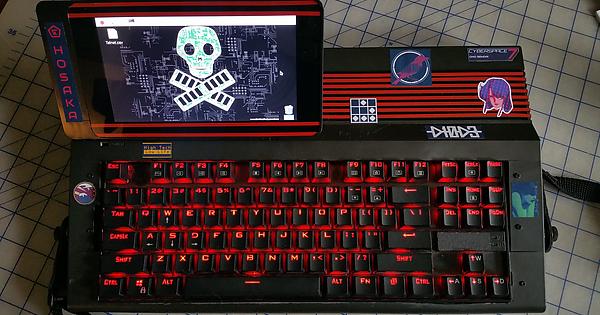 Out of all of the fictional devices in early Gibson, though, it’s not the decks of the Sprawl I responded to, but to Chia Pet Mackenzie’s personal computer in Idoru:

Chia looked down at her sandbenders. Turned off the red switch. “Coral,” she said. “These are turquoise. The ones that look like ivory are the inside of a kind of nut. Renewable.”

“The rest is silver?”

“Aluminum,” Chia said. “They melt old cans they dig up on the beach cast it in sand molds. These panels are micarta. That’s linen with this resin in it.”

In the same vein as a Peter Blasser Cyberdeck, maybe.

this sounds cool. but when mixing tech with more organic materials there’s always the risk of it ending up a bit too steampunk.

semi related, looks like e-ink tech is slowly getting better. would be a good fit for a v2 of this cyberdeck typewriter build alongside a more efficient processor and a better case.

who’s gonna be the first to make one of these with a VR headset? edit: it’s been done, some examples and chat here on reddit

this sounds cool. but when mixing tech with more organic materials there’s always the risk of it ending up a bit too steampunk.

that’s the thing; I think the whole point he’s stressing is that it doesn’t ever get near that; the choice of materials and processes gets you partially there. but hey, I’m just talking about fictional computers.

Ahh, yes, the sandbenders. I took a roundabout way of reading Gibson’s work. First it was Sprawl, then Blue Ant, then what I’m hoping is called Jackpot, and lastly Bridge. I loved the world of Bridge.

There’s also a whole discussion to be had about the sustainability of the electronics industrial complex, mining of silicon, shanzhais. We’ve all been so programming to envision the future being made of metal by media (don’t get me wrong, I love Bladerunner as much as the next) that it is hard to imagine an alternative. But there are many!

Between this and your writings about Halt and Catch Fire, you got my whole heart infovore.

writings about Halt and Catch Fire

where can we find this?

Yeah, that one on BACK7 is my favorite, so far. Only thing is that I saw that about the same time as they announced the new camera module, which requires ribbon cable access–apparently not included in the build (there are workarounds evident, however). I love those mil-spec GPIO ports–very clever–but it’s the ortholinear keyboard that really made it stand out for me.

Build by Reviiser Shared by Hackaday: Improvements in miniaturization ultimately made the portable computer obsolete, but that doesn’t mean some people still don’t want one. [Dave Estes] has been w…

Patrol The Sprawl With This Battle Ready Cyberdeck

The recent crop of cyberdeck builds are inspired, at least tangentially, by William Gibson’s novel Neuromancer and its subsequent sequels. In the novels, the decks are used as mobile terminal…

tl;dr So after seeing more and more cyberdeck post on hackaday I decided to recycle one of my older portable raspberry pi projects into a cyberdeck of sorts. This has to be my most ambitious 3d des…

It’s not a cyberdeck, but I’ve had an idea along those lines making use of a NUC9 interchangeably for studio and performance work, basically by leaving out the GPU and opting for an ADAT soundcard, instead. While I had conceived of it for use with a portable multitouch screen, I hadn’t considered VR as an alternative until just now (though I had separately been interested in using Virtual Desktop with a DAW), as the NUC9 can apparently handle VR.

Anyway, I’m now thinking it could be interesting to mod one of those new NUC chassis in the fashion of a cyberdeck, particularly since leaving out the GPU would leave plenty of room, I think both volumetrically and thermally, to build into the case. It would be a ridiculously expensive and overpowered rig as far as cyberdecks go, however, and I think that otherwise one would have to go the mini-ITX route anyhow to squeeze adequate power into that form-factor

I don’t know what makes a cyberdeck a cyberdeck (or even if that’s an important distinction) I think as a base rule some level of customization seems integral, and portability. Reading the original Gibson stories I felt the characters were working with modular computer products. At the time the concept of 3D printing and rapid manufacturing wasn’t well known, so I think it’s really cool reality has out cyberpunked cyberpunk.

@infovore thanks for reminding me of sandbenders! The link to Ciat Lonbarde is a brilliant connection. Idoru is an underrated Gibson book imo. I remember seeing the first footage of VRchat and being elated it had finally been made real.

@RMBLRX it makes me wonder when manufactures will begin to notice this movement. Mini-ITX is already a thing. I can’t speak for anyone else, but I despise laptops as a form of object. Very excited to see where all this leads.

I am thinking of building some kind of audio outputting device with a screen and, maybe, based on a Raspberry Pi. At first to run Pure data patches as that is what i have the most confidence in at the moment.
I’m pretty sure this isn’t a cyber deck. Perhaps a ‘computing platform device’. What is the right term?
Id like to use the screen for choosing a patch. knowing what parameters each encoder knob is currently assigned to and its value. nothing arty…I like those epaper screens. (inkywhat) though they are small.

Only just started to think about this - its very half baked set of ideas at the moment. The thing could grow a bit in scope as I learn stuff and get more ideas. what inputs and outs.

probably could be a different thread. but i’m very interested in the self-build-something-with-a -screen at some point.

but I despise laptops as a form of object.

what form factor do you envisage as an alternative? because most of the cyberdecks I’ve seen, cool as they are, seem much bulkier and more awkward to use than a laptop.