Deck: an integrated instrument & control surface based on norns

The Story
About 2 months ago, I was considering building a DIY neotrellis grid & got to thinking on potential enclosures. A quick spin through the Hammond website turned up this & I was immediately struck with inspiration. I didn’t know what it would take, but I had to build something in one of these boxes.

Originally it was going to be just a grid with a few bonus utilities on board, like some batteries, a powered USB hub, and an adjustable DC power supply. When I got to framing things out though, it turned out the grid wasn’t quite gonna fit in the 10"x6"x2" case unless I were to space out the wooden sides a bit: 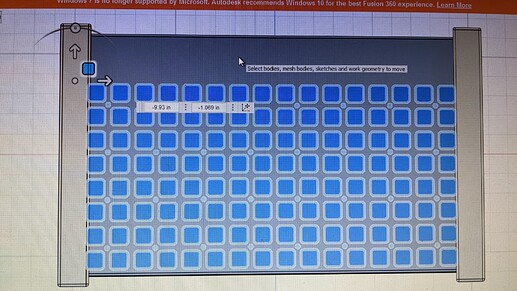 I then realized that Hammond happens to sell a larger version of the same enclosure: 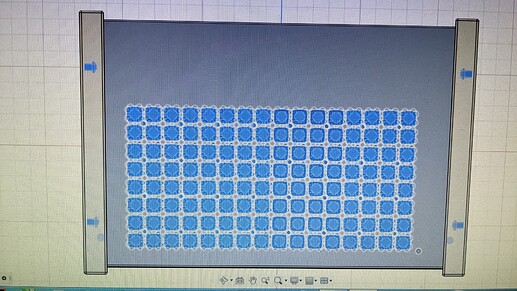 Okay, great! Except now what am I gonna do with all that extra space…? Cram a whole norns up there, of course!

As the original norns shield is too tall for things to fit cleanly in the vertical space available, it quickly became apparent I’d need to rework the design. With no experience doing this, I loaded the 200323 source files into KiCad & got to work. 2-ish months later, this is what I’ve got & I’m just about ready to order PCB’s

I’ve been mostly posting on Discord about it, but I did post a version of this a few weeks ago in the DIY norns thread:

The featureset has been updated slightly since then and is (roughly) as follows:

I’m still working on the enclosure, but I plan to use a CNC mill, and have gotten a membership at a local makerspace to that end. Lots to learn still but I expect the process to be highly repeatable for small-scale manufacturing. 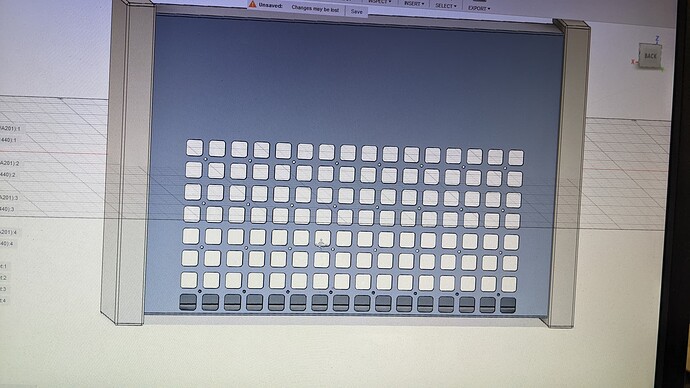 Going Forward
This thread is intended to document my development process, and will be updated as time goes on.
Any questions, comments, suggestions, ideas, etc let me know!

Huge thanks also to @nonverbalpoetry for helping with voltage regulator stuff, the idea to use mech switches, & just hyping me up in general.

This is incredibly awesome. Can’t wait to see it finished.

This looks like such a brilliant idea. Could definitely see this replacing my fates.
Very keen to see this come to full fruition!
Have you thought about adding cv like an integrated crow?

hmmmm… I don’t have much modular stuff (just a werkstatt) but either 2 or 3 of the internal USB ports will be brought to the back of the case so one could use crow, USB midi devices, or even a second grid with a USB cable same as an official norns

I’ll think on it though.

what was I saying about feature creep? maybe it needs more knobs…

if you could plug this into a crow then thats awesome!
Definitely need more knobs. 16!!!

lmao I tried, I really did but received some (pretty good) advice on discord that ~18mm pitch is real tight, especially with 1cm knobs

Plus unless I use a teensy 3.2 (which are unobtanium, for the most part) I don’t have enough analog pins for both the knobs & i2c for the neotrellis matrix

This is so cool. Looks a little bit like the dadamachines composer pro thingy announced a few years ago, which had some concepts in common. It got never released though.

tbh I have a deluge & that’s one of my biggest inspirations but it really is the year of the grid sequencer // groovebox, what with polyend play & squarp’s hapax both being released in the last few months.

#1: I added 3d models to all of the footprints in KiCad, and it looks vvv pretty 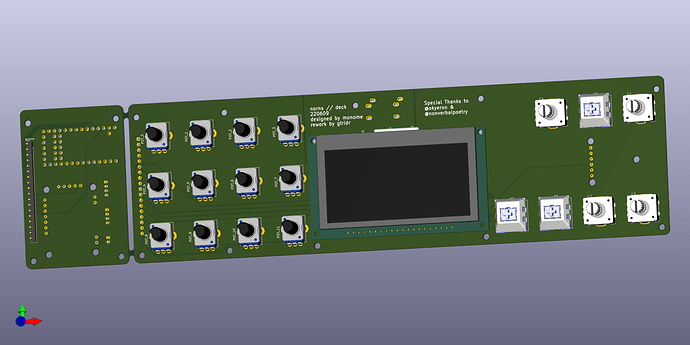 #2: Panel layout is relatively final! I mapped this out using the drawing layer in KiCad, then plotted only that layer as a DXF. This allowed me to pull everything into inkscape as dimensionally accurate vectors! i then replace the rectangles with native rectangles so that I could round the corners natively. 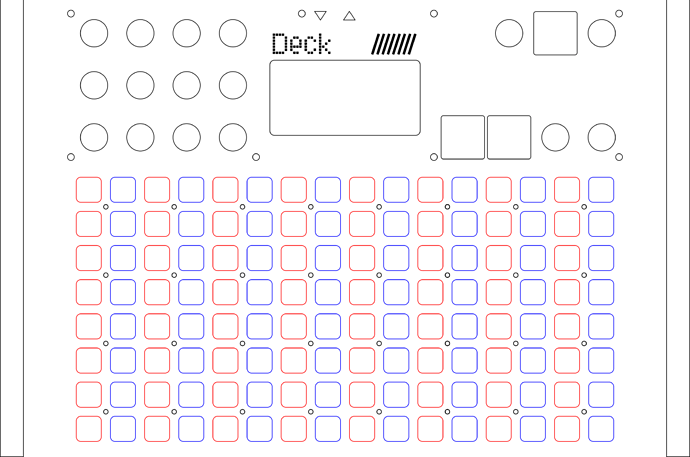 Happy to hear back from people on this. I’m pretty busy this week but I plan to start using these files to finish modeling the final cutouts in fusion, and maybe even pull the kicad model in to make sure everything fits proper.

I’m trying to make some final decisions RE: encoders & pots and wanna make sure everything looks uniform, sits at the same height, etc.

DISCLAIMER: the llllllll logo is there because i like the look & the symmetry of 2 logos. I have no affiliation with monome, the lines mod team, or anyone not explicitly mentioned above. I vectorized it using inkscape’s image trace feature from the png at the top of the home page.

Personally I’d love to see at least two sliders somewhere (maybe to map lfo speed or modulation amount), but asides from that this looks amazing.

This is incredible. Great work.

What about a master volume control?

Oooo there’s an idea …
That may be doable; I’m gonna have to look into whether there’s midi mapping for master I/O levels… you could definitely map master volume yourself to one of the MIDI pots if so. Problem is I’m out of analog pins available on a T4.0

@robint I definitely tossed around the idea of linear pots at some point but I realized I’d have to sacrifice a lot of panel real estate (to the tune of 3 rotary pots per fader) in order to make it happen, and even then I’m not sure I’d be able to comfortably fit the 60mm faders used in, say, 16n.

I honestly even considered pitch/mod style wheels, a small OLED screen & some keys for bank-switching, or even a Force Sensing Resistor with a linear softpot on top to have a ≈200mm aftertouch ribbon controller (creds to @nonverbalpoetry who actually built a functional DIY trautonium with this method) but in the end I decided to optimize for as many knobs as possible, plus I hit the aforementioned limitation on analog read pins. (I plan on building a 16n anyway cuz don’t get me wrong I love me some faders)

Honestly lots of ideas have ended up on the cutting room floor & as mentioned, this project has been a lovely case study in bloat & feature creep. I find myself having to rein in the scope of the project & really focus on what I want the object to be, and how it should serve the broadest possible set of use-cases

be neat if all of the connections (MIDI, Audio, USB, etc.) could also fit on the top face.

but it looks like that is all pretty full…so they would have to go around back.

excited to see where this goes!

I’m in the process of designing a very very similar thing (although I ditched the last row of pots for 2 0.91" oled screens ) and an encoder to allow for page navigation and storing and editing of mappings. 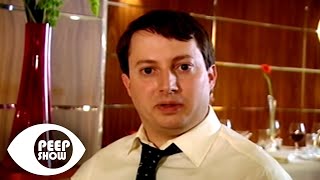 This is utterly fantastic. Definitely following with much interest.

I /suppose/ I could maybe use encoders? it’d certainly free up some ARead pins

as a side-note, if you stick w/ pots and are afraid to run out of ARead inputs, they are some ADC chips (like this one) that allow converting a bunch of analog input to digital.