Hi, I have been recently annoyed with the default scene when starting with SW3 pressed, as it sends a loud tone out of every possible output. As I am going to perform with the Aleph soon in a theatre play I might have to restart at some point, and I neeeeed to make sure I can start with silence for instance, or at least with a specific routing. I have been looking in quite a few files but couldn’t find the way to modify it, so any help would be greatly appreciated!

what you hear is the default settings of the “waves” module parameters. you can change these two lines:
[ https://github.com/tehn/aleph/blob/dev/modules/waves/waves.c#L340-L341 ]

to set amplitudes to zero, and recompile waves

That is precisely what I wanted to know. Thanks Ezra, thanks a lot!

Edit: sorry for this naive question, but I should recompile Waves only, right? And if so (I tried with the whole Bees but Waves didn’t change), how do I do that?

yes, that’s right. DSP modules (lines, waves) run on a separate processor from control programs (bees) and are compiled with a separate toolchain. control processor is AVR32, dsp processor is Blackfin. check the “development setup” section of the README for details on setting up blackfin toolchain [ https://github.com/tehn/aleph ]

anyone else think that default amplitudes on waves should be silent? i think the reasoning for the current behavior is to use the output levels as a quick indicator that everything is working on startup (especially the filesystem.)

default on for sure.

though a loaded scene with zeroed out levels should defeat this, right? ie, scene values are sent and then DSP is activated? i haven’t looked at the code yet.

yeah, that’s the idea… though, looking now, i see that bfin_enable() is indeed called after sending param values (scene.c:374), but bfin_disable() doesn’t ever seem to be called. shouldn’t really matter as the the audio-enable pin ought to be low at startup, but we should set it explicitly before loading a module.

in bees 0.7.0 (just posted) i made scene recall explicitly disable audio before loading a new module. so i think if you have a default.scn that is silent, you should never hear any tones on startup. but let me know if this isn’t the case.

Hmm just tried it but I am unsure about this one. If I boot with SW3 pushed I still get sound full on out of every output.
I have made a silent default.scn, but it seems to be overwritten in that case.

oh, i see. yeah, booting with SW3 doesn’t load a scene at all, it forces bees into its “first run” initialization cycle, where parameter scaling tables are written to flash, and the ‘waves’ module is booted with it’s default values.

this mode is mainly intended for troubleshooting; the audible feedback is valuable (as brian indicated above)

do you find yourself needing to use this mode in performance? if so we should address the underlying issue.

Well I definitely agree that it is valuable the way it is.
Now point is, I will be performing inside a theater play in Copenhagen for a month, and my main source of sound is the Aleph. I have made a lot of different scenes, and am linking some of them together with the use of presets. So far so good, and it has already given great results.

My main issues though come from the preamps (they create regular audible low frequency clicks when you push them, no matter what you do), and mostly from this booting with SW3: when I load a new scene I once in a while have to make a clean reboot because of the well-known freezing problem. Hence my efforts to put as many scenes together with the use of presets, and my need for a silent reboot: I mean, it’s a 90 minutes long play, I am using a pedalboard already loaded with stuff and I am performing at least 30 minutes in there, with something like 16 different parts… Some changes are quite fast, so I’d rather not have to deal with anything else than the stress of rebooting n the middle of a show. Now without the freezing issue I would just load one scene at a time and everything would be solved, right. I should mention though that my Aleph freezes substantially less since v.7.0, which is great.

So back to the point: anyway I can make it silent for this particular thing?
Thanks a lot for your patience regarding my regular posts: I am asking lots of things, and I must say I am very amazed by the time you have spent dealing with me already. So cheers to that, and all the best!

yes sure, of course it makes sense

so for now, here is a version of waves.ldr with silent initial amplitudes
waves.ldr (41.1 KB)

but here’s another thing: it would better to avoid doing a first-run boot during a performance. you don’t really want to be writing the scaling tables to internal flash in that situation - it takes longer, and a power interruption during that process could corrupt the firmware.

so, what if i add another bootup switch, say SW2, which loads a specially named scene - say, ‘clean.scn’ ? then you can define exactly what you want the “panic mode” state to be. this is easy to do.

That is a brilliant idea Ezra. And not only it is exactly what I need, but I am quite sure it could be helpful to quite a few people.

I had a fantastic jam at the theater tonight, spent 2 hours playing alone on the big stage. Mostly with the Aleph, I keep finding new places and sounds I didn’t expect to reach. I really love this thing!

hey, that’s wonderful! so glad to hear you are getting some good times out of the aleph. would be very interested to check out a video or recording of course.

i went ahead and posted an update with that change. also fixed BIGNUM recalling x/y positions:
[ Aleph update - bees 0.7.1 ]

like i say in the post, i’d like to focus on DSP stuff for a while. there are big improvements to be made and all it needs is a little time and dedication, so i don’t want to be thinking about big features for BEES. (but sometimes easy tweaks can make a difference, so don’t hesitate to ask…)

Waow you were fast on that one, thank you! I will try not to ask too much too often for a while haha, what you wrote about seems very promising and I indeed think Bees is working quite fine now. Here’s a pretty bad picture of my rig for the stage (there’s a Kurzweil KSP8 at the end of the chain, though): 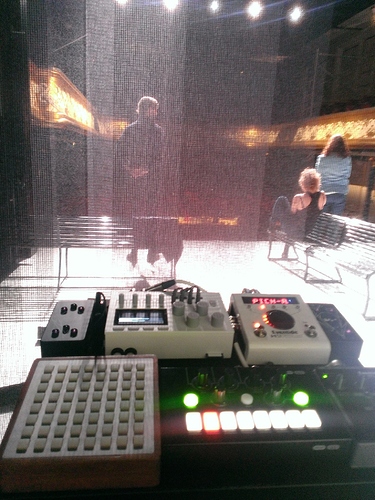