Delinquencer - A sequencer but with a mind of its own

A “sequencer” module for Norns but with a mind of its own! 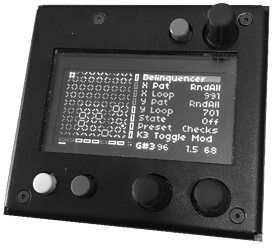 The Delinquencer is my second ever script for the Norns and I wanted to create a sequencer that allowed a music producer to have fun exploring, mangling and generally being inspired by finding sweet spots in a 64 grid of notes. Essentially, the Delinquencer starts out as a simple 64 grid sequencer but then allows you to experiment quickly.

So it’s the Delinquencer feature complete?

Well probably not, I’m sure its missing a feature you think will be vital, but I’ve had to draw the line under the Delinquencer project otherwise it would never see the light of day outside of my Norns Shield.

So what makes the Delinquencer something you should try?
After all it’s not like the world needs yet another sequencer?

Entering notes into a 64 grid and playing them back is usually the end state for most sequencers but for the Delinquencer that’s the starting point. It’s the ability to mangle and alter over time the playback of these notes that makes the Delinquencer different to many other sequencers.

So is Delinquencer a MIDI sequencer?

Well yes, but I also dabbled in SuperCollider and ended up producing a new sound engine. I only added it so I could just have a simple sound during development of the Delinquencer. Trouble is, that took on a life of its own. It’s still simplistic but then this was meant to be a sequencer project not a synth-engine project, but it’s fun to play with.

Warning: This mini manual is just a list of navigation commands and parameter descriptions, its provided as an aide-mémoire and is not a replacement for the full Delinquencer manual and its walkthroughs. See the link at the bottom for where you can download the manual and your first walkthrough (other walkthroughs and documents coming in the next few days).

Fundamentally the Delinquencer script turns your Norns into a 1 to 64 notes / cells / steps sequencer that allows you to set the note pitch, length, velocity and probability. You can change the BPM, time divisions The Delinquencer play both sound through its own limited PolySaw engine and/or send MIDI instructions to a connected synth (its intended purpose).

Delinquencer also allows you to change the direction of sequence note play, forward, back, up, down etc., as well as some more interesting ways (spiral, snake, frog, blocks etc.). It also has some note presets to get the 64 grid filled in quickly (to get you exploring rather than laboriously entering notes manually). Delinquencer allows you to transpose the whole grid of 64 notes and quantise the notes to a specific music scale.
If you do want to enter notes manually you can still set the individual pitch, length, probability for each of the 64 steps/cells.

Delinquencer allows you to set each cell/step to one of the following four states: On, Rest, Skip and Control. The On, Rest and Skip states are all standard, but where things get interesting is setting a notes state to “Control”. Now you have just handed over control of that cell/step to the Delinquencer. The Delinquencer now decides what happens based on the other settings you make.

The PatterMaker screen makes it easy for you to assign the state to the 64 steps and which cells/steps you are going to give the Delinquencer control over.
So once the Delinquencer has some notes to play with, the fun starts. On the Delinquencer menu page you will see that the 64 grid of notes are displayed and 8 modulation indicators run along the bottom and on the right. The modulation indicators have one of two settings, either On (lit) or Off (un-lit). If the intersecting cell/step at an “On” modifier in a column and row modifiers are both On. 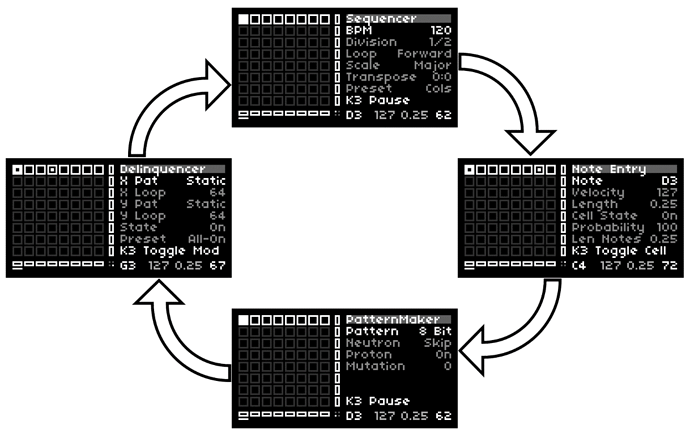 PS. Also properly crashed my norns (1st time ever), won’t even respond to ICMP pings. Crashing a Linux is impressive in itself. I’ll investigate and report more productively if i can (at this time im not confident to attribute the crash to Delinquencer, but that’s what was running at the time).

PPS. I think it was a combo of norns crashing and network disconnect, hard to believe in crashing the kernel. Anyway, making bleeps again.

Yeah I would love to add support / use a monome grid but I just don’t have the funds at the moment.

If you have a device that can run TouchOSC, there exist TouchOSC implementations of Grid and Arc.

I made a mistake with the link to Walkthrough #1. Its now fixed, if your struggling with the Manual (which is quite dry) the Walkthrough will make half of the Delinquencer understandable, I’m working on the second Walkthrough at the moment, should be released over the weekend / early next week.

A small Maiden error about a missing PNG on script load, on updated Delinquencer.

Edit found it, line 966 of delinquencer.lua points to possibly old name of the script, bitstream. Norns has a variable for the script home directory, _path.this.

Fixed it (sorry no change to provide a pull request right now), and I have to say i like what i see

Well spotted, yes “bitstream” was the prototype name.
I have now fixed the bug and uploaded the fix to GitHub.

Thanks for the clear bug report, allowed me to fix it quickly. Your name now added to the
Bug Fix Reporters List in the script

Hi, Just wanted to point out that the default initialisation patch that runs when you start the Delinquencer was trying to show off some of its features. However I appreciate that this is not a great “start point” for either learning or entering in your own project.

If you navigate (press Key 2) till you get to the “Notes Entry” screen and then press and ** HOLD** Key 2 it will “init” the Delinquencer to a simple 8 step pattern.

As promised, for those that want to go deeper with the Delinquencer here is what you need …

Single A4 Page cheat sheet of the menu structure for finding your way around.