Curious what folks who drink the transformer Kool-Aid are using.

I’ve had great experiences with the Phoenix Nice DI but am looking to try something else. The RIP looks awesome obviously but I’d rather have this box sit outside the modular. Any thoughts on the new Telefunken boxes?

Thanks in advance for any thoughts!

Coincidentally, I received my RIP yesterday.

I also happen to be an early adopter of this:

My setup is currently mixer-less and after fighting with signals from many different sources being too hot or too weak I ended up going with a Phoenix N-8 DI (basically a multi-channel version of the Phoenix Nice DI).

I’ve got no relevant experience to add, but I’ve had my eye on these for while:

Coincidentally, I received my RIP yesterday.

Thanks for the OLLA link too. Hand’t heard of it!

Oh nice! Interesting about the high-end. I haven’t noticed that on the Nice DI.

@ether: I don’t know anything about the RNDI but I do have a pair of Golden Age Project Pre 73s, inspired by the Neve 1073, that I use as DIs and have found them pretty great for adding color especially. Ideally I’d like something similar but a bit more compact. (This is a portable setup I’m working on.)

@Larrea I’d be curious how the RIP sounds driven hard. Do you have pads/attenuators between the RIP and your interface?

Poking around and found this possibly relevant thread on muffs which keeps me returning to the JDI duplex as an option. Any experiences?

Incidentally, one voice on that thread argues:

The effect of a DI’s transformer will be pretty subtle. I’d say if I recorded some modular stuff through a Neve 1073 and without it, a lot of people would be hard pressed to hear the difference.

FWIW this doesn’t match my experience at all and really gets at what I’m looking for (snake oil or not), which is to say transformer harmonic distortion (err, mojo). No stage sound or long cable run issues here. Just a desire to put some iron between the modular and audio interface. Ideally I’d like a box that can be clean but also really saturates when pushed.

Maybe DIY is actually the way to go? I recall reading this article about transformer coloring in Tape-op years ago and it’s nagged at me since; maybe it’s time to commission a transformer color box?

Anyone gone this route? @Galapagoose: curious if you did any exploration before landing on the Cinemags in the RIP?

I haven’t used it personally but this diy ferrite di box looks interesting: Build your own boutique passive direct box. Our popular DI box kit is back with expanded features and three transformer options. The FE2's studio-quality electronics are housed in an architectural aluminum enclosure that's rugged enough for the road....

Aside: this is actually nice to reference for folks who whinge about the price of the RIP — notice that the cinemag transformer option runs at $149, and you’d need two!

The original FE DI Box by DIYRecEq’t was one of the main inspirations for RIP. They sound great and are dead simple to use & build. Plus the transformers are ~$50 while many other options go even higher.

Did a little trial and error at the time, and liked the Cinemags / Jensens the best (they’re identical, but Cinemag designed it & is a much smaller company) for the price. Obviously form-factor was a big consideration to fit into eurorack, and availability in small quantities (only ever ordered 50 at a time, unlike real DI manufacturers orderings hundreds / thousands).

JDI boxes are AC coupled, so if you want to do the DC offset trick as described on the RIP page, you’ll have to go with a different box or DIY.

in response the the muff post about difference, it is mostly apparent at level of operation. transformers you can push harder and get a softer onset of harmonic distortion that is not as apparent in solid state circuits.

Thanks for the added background. The DI box kit looks like a great playground.

And cheers for your generosity!

Out of curiosity, did you ever consider adding output attenuators? I’ve found that when I really want to drive transformers for color I need to attenuate (or pad) on the way to my interface (which is easily overwhelmed).

JDI boxes are AC coupled, so if you want to do the DC offset trick as described on the RIP page, you’ll have to go with a different box or DIY.

Great point. I’ve never been able to try this and it sounds super intriguing!

Out of curiosity, did you ever consider adding output attenuators?

Honestly I never thought of this. My soundcard has optional pads on the first 4 inputs so I didn’t really think it necessary. In my experience you’d have to be sending a ~20V p-p signal to RIP before substantially clipping a +4dB line input (I always thought the output of RIP was a bit low ~0dB for a standard 10V p-p signal).

Why not charge more?

Simply put, they wouldn’t sell! It’s already a niche product seen as ‘too expensive’. We’ve sold 40 units in about a year and a half. It’s clearly not a ‘marketable product’ in the traditional sense, hence ‘passion project’ which doesn’t have a need to turn a profit.

We’ve sold 40 units in about a year and a half.

Seriously, from where I sit, this seems like a bargain. But yeah, the market is fickle… Anyway, happy to support the cause and really looking forward!

Incidentally, for folks following along and wanting to geek on some transformer physics, someone pointed me to this old muffs thread. Good stuff.

Seriously, from where I sit, this seems like a bargain.

I think I said the same thing a few months ago.

It just doesn’t have a hundred knobs, pressure plates, fancy Blinky lights, so people who are uninformed or don’t understand things think it ain’t shit.

I haven’t installed mine yet so I can’t say how it’s actually sounding in front of a sound card. I’ll try to report back when I do…but you’ve ordered one too. Yay!

Finally unwrapped it this morning. Snapped this. 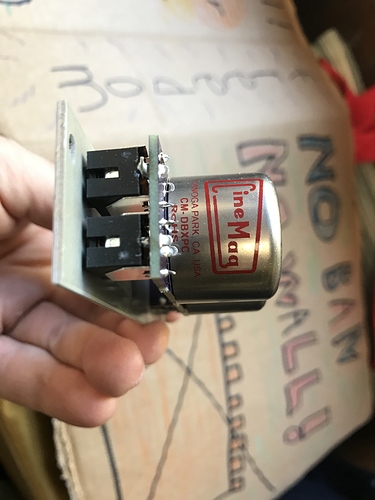 I panicked for a second thinking it may be too deep for my case but I see it listed on modulargrid at 39mm so phew.

PS: love seeing your protest sign in the background. Headed to the airport?

PS: love seeing your protest sign in the background. Headed to the airport?

Oh, no; well, yes, but yesterday. Was there for about 7 hours; protesting, and helping the lawyers, bringing water, food, etc.

My son (8) actually made the sign for me, with help from his mom. On the other half he wrote about his grandmother (my mom) being a refugee, his mom being an immigrant, etc. He was stoked to try to do his part and honor the principle of it all.