I find myself suddenly tempted to buy a digital piano, but the range of options, manufacturers, and price points out there is a little overwhelming. I didn’t see a dedicated thread on the subject, so figured I’d create one. Seems like Lines would be a great place to share thoughts on any/everything e-piano: sound engines, action, design, connectivity, you name it.

Definitely recommend trying them in person. When I bought mine (a while ago, for lessons – have sold it since), actually playing a few revealed a lot that videos and reviews didn’t.

I’ll start! Though not a great player, I grew up playing piano, and love spending hours on my grandmother’s old upright whenever I travel back home. I’ve cycled through a number of cheap, smaller-sized midi controllers over the years, and I’m itching for something…heftier, polished, engaging.

Most e-pianos have decent MIDI connectivity options, so that isn’t too much of a concern. What I’m looking for is something that’s a step up from an entry-level model. I want a fully weighted set of (88) keys, 1/4 outputs (preferably), and a colorful, versatile collection of onboard sounds (though I do intend on using it as a controller as well).

Yamaha and Roland seem to offer a bajillion options that fit the bill. Their designs, though, always strike me as a little sad. The newly announced Casio Privias, though expensive, seem interesting.

@wakyct Definitely! Limited selection at the stores I’ve visited, but I’ll keep exploring. Did you land on anything else that you prefer?

@wakyct Definitely! Limited selection at the stores I’ve visited, but I’ll keep exploring. Did you land on anything else that you prefer?

I ended up with something basic but solid – Yamaha P80. The sounds were just average, but the feel was very good from what I remember.

Like I said that was a while ago; at the time the P80 was priced at the low end of the second tier, if that makes sense. The used market prices look pretty good right now.

nord electro 4 and rhodes 73 mark 1 owner here…
also spent a decent amount of time on my brothers korg sv-1. all in all i think that it’s an expensive venture, but very worth it. i love my nord so much, but i’m not really into their business model. it’s basically just add 100mg of ram every year, and charge the same. but i use it all the time since i bought it new, as a controller or audio source it’s incredible. the korg sv-1 i was super impressed with. the action is amazing and piano like, even better than my waterfall nord. the sounds on the nord are a bit better, but not much. of course the rhodes is really amazing too… but lots of maintenance and tinkering. doesn’t get tons of use, but it’s still my favorite sound ever.
i think if you’re going for something a bit more affordable, you can’t beat casio or yamaha.
good luck!!

+1 on the korg sv-1. just finished a tour where one of the bands had one, got to mess with it a bit at soundcheck and the action is incredibly satisfying. in the few times i’ve messed with various nord electros, i was never really into the action. sv-1 also sounds great. i went down a rabbit hole over the last few months trying to research these sort of stage pianos, and a lot of people are very specific about who has “the best” EP and organ sounds, but i’ve shifted my philosophy lately that anything that’s “good enough” is a perfect candidate. a person listening to a live performance or a record wouldn’t know the difference between the nord or the sv-1.

i initially thought this thread was going to be about electric pianos in the sense of Wurlitzers, Rhodes, and tine/reed/amplified pianos, in which case - the yamaha reface CP punches well above its weight as far as sound goes, and it can pair with a nicer/bigger midi keyboard for playing it.

the korg vox continental, a recent reboot, also seems to get good praise, but it didnt really catch on so its hard to find many opinions, demos, or even physical ones to try out.

I’m definitely not an expert, but if I had the funds to spend on a nice EP I’d be looking at the new Casio Privia.

My friend Mike Sokolowski, @breezeway1, has been enthusiastic about the new Rhodes from the UK.

By all reports it’s a beautiful instrument… 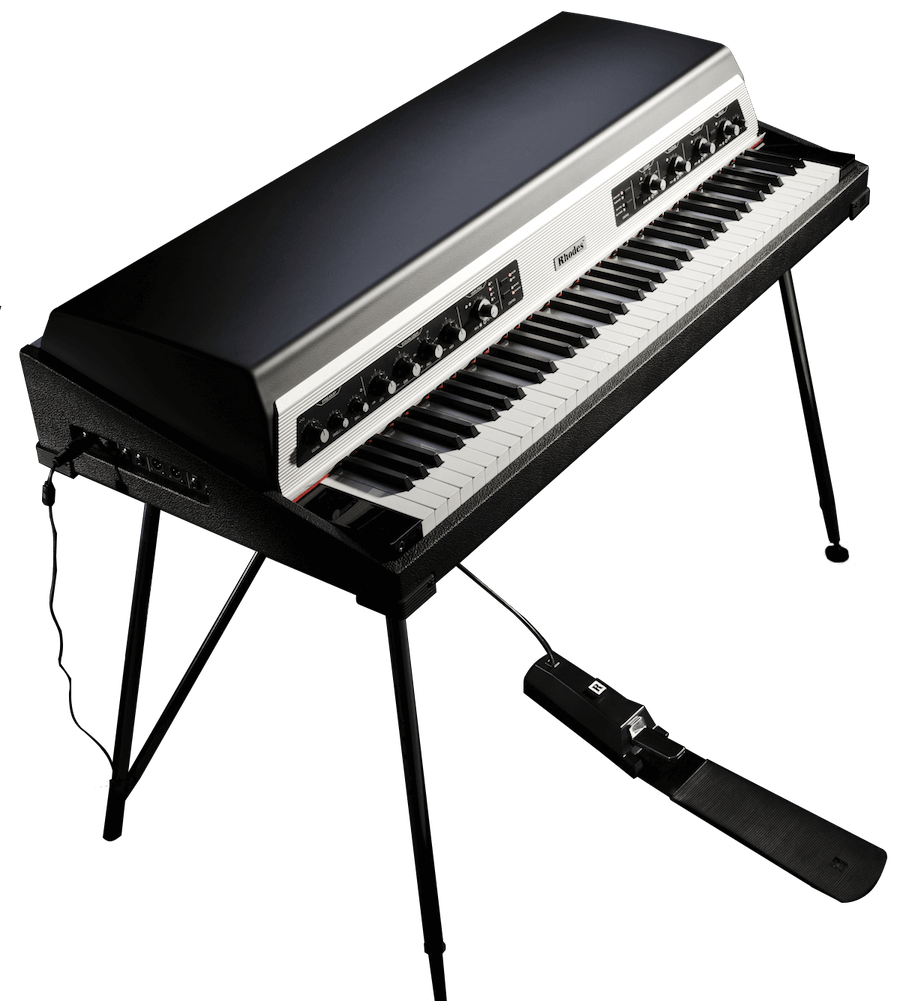 Yeah, I’m really intrigued by these. Not sure I’d be able to spring for the top end PX-S7000, but I might be able to sell a few gizmos to get the PX-S6000. Definitely want to try them in person, but I have no idea when that’ll happen (at least here in Montreal).

i assume we’re talking about what is generally called a digital piano, so it might be worth renaming the thread because

are a very different (and fun) topic.

as noted, the digital piano space is pretty opaque. many companies don’t publicize the keyboard action they’re using (often, but not always, made by a third-party supplier) and ‘how it sounds’ can often kinda be all over the place.

i haven’t used the recent Casio stuff, but i think they’ve done a great job with the design and simplicity for a modern keyboard/piano.

the latest studiologic numa x and numa compacts are interesting, because i’ve heard great things about the keybed they’re using and they have a bunch of modern features (audio over usb, mixing audio engines on device, insert fx, etc.) that seems more musician-focused than necessarily just piano practice. they might be a good comparison to the korg sv-1 (which is also very nice).

i have had very good interactions with Kawai digital pianos. as far as i know, their higher-end stuff often uses wooden keys in key actions of their own design (rather than using the totally fine but somewhat less nice Fatar plastic keybeds you’ll find in a lot of these instruments). they have a range of stuff that tends to look more like a piano and tends to be much less portable than a keyboard design (which will likely need a stand).

i will also say that i haven’t used a single digital piano where the sound engine has ever been anything more than serviceable and have opted generally to use more interesting sounding plug-ins when actually recording stuff. it’s hard to beat the immediacy of turning something on and just playing, so i’m not necessarily making an argument for a nice midi keyboard instead (like a studiologic sl or kawai vpc), but it’s good to set expectations.

i assume we’re talking about what is generally called a digital piano, so it might be worth renaming the thread because

but it’s good to set expectations.

Yeah, 100%. I wouldn’t be inclined to record the onboard sounds either, but — as you say — it’s nice to just turn on, play along to favorites, and have fun. Speaking of VSTs, gah I’d love to mess around with Slate & Ash’s Landforms with a full-size piano.

I have a Korg D1 which I like. The sounds aren’t great compared to VSTs I’ve used but I couldn’t find anything comparable in price with 88 fully weighted keys. I would recommend it as a kind of “MIDI controller with sounds of its own when you don’t want to turn on your computer”. I wouldn’t gig with it but it feels nice to play at home.

I’ve always loved the Kawai digital pianos. The action is gorgeous, and I’ve always preferred the sound of Kawai acoustic uprights over the Yamahas which I always found to be brighter. I used to have one of their ES series uprights which had its own sounds and speakers but some years ago I swapped it for the VPC mentioned above, which provides the Kawai wooden key action as a soundless/speakerless midi controller.

I’m sure that digital piano sounds have improved in the last 10 years or so but I could never find a digital piano with a sound I really liked, so I use a raspberry pi loaded with Pianoteq which I’ve always found to be brilliant. Being able to use Pianoteq without using a computer/laptop has really helped me as I spend all day working on computers and the thought of looking at a computer screen to get the piano to work would often get in the way of my practicing.

I think I originally got into Kawai pianos because Muse’s Matt Bellamy used one as his stage piano and back in 2004 that was my jam. 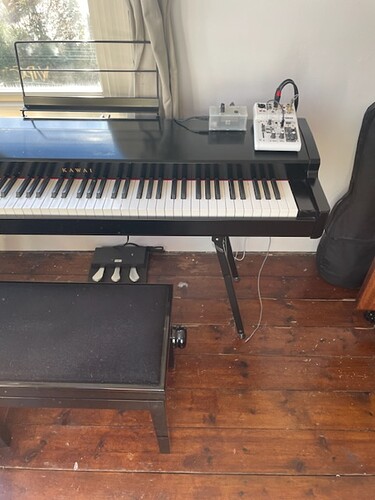 This is timely for me because I’m also in the market for some sort of electric/digital piano to replace a baby grand that we lost in a fire. I don’t play piano, it’s more for my son. But I’d also like something nice for when my band practices at my house so the keyboard player doesn’t have to haul his Nord Electro 2.

I bought a Kawai E920 last year that I enjoy a lot.

When I started searching and had the same feeling of being overwhelmed at the different brands, options, and price points, a friend tipped me off to this family-run business in Arizona: https://azpianowholesale.com/

They were able to give me a lot of insight and provide useful recommendations, and when I decided on my piano, they got me a good deal.

I’ve been thinking similarly to try to learn piano. Has anyone gone the straight midi-controller route? I have loads of piano vsts and was thinking of the studio logic sl88 studio. Any opinions?
(I hope this isn’t diverting from the op’s question as it seems similar but am happy to delete if it is stepping on toes!)

I use this Keyboard frequently. The overall build-quality and the price tag are really good imo. Unfortunately some keys have become clicky. I got used to it, but it isn‘t nice if you play without headphones. Will have to send it to repair one day. Any recommendations for Piano VSTs?

Thanks a lot for the info! Wrt piano vsts not sure what I’d “recommend” as I’m not sure I’m a good enough judge! But I have loads of NI Komplete piano vsts in Kontakt (both current as well as deleted ones - I use various sequenced from Ableton - not sure what someone who actually plays them would think of them though!)

The acoustic and electric pianos in the Arturia V Collection are really nice, as is the Lounge Lizard from Applied Acoustics. It’s the basis for the Ableton Electric plugin.

Interesting differences between the AAS versions and their Abletonized versions. It’s really nice to have the Ableton versions fit in the instrument channel below the main window, but the presets are far more plentiful in the AAS versions…

I would suggest looking at the $400-$600 Casios. I find that their keyboards work very well and are comporable to more expensive competetors. I 've been using a PX150 for seven years and I love it. The built in sounds and speakers are only ok, but I use Pianoteq and Native Instrument’s Noire and they sound fantastic.