get it in maiden catalog or ;install https://github.com/emanuelep/dimension-expander

I’ll give this a try this eve

This sounds great! I have to ask what’s the story with the chicken?

I did wonder too… I was trying to work out if it was a chicken>egg>chicken thing, but it seemed like a stretch.

thank you! hahah it’s actually a pixel-art homage to the chicken on the original plugin’s gui 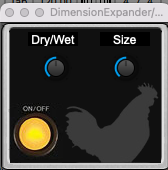