The three room tones I used are: A: hotel elevator; B: ferry (enclosed); and C: Gjoa room in the Fram Museum. (The Gjoa is the ship Amundsen used to discover the NW Passage in the Arctic; it was outside in San Francisco for a long time, but it’s inside now in Oslo.) In each case I was trying to capture a specific sound or sounds within the space, but failed each time, leaving room tone only. The ominous rumbling I used for the bridge is not the ferry, but the space around the Gjoa, which proved to have significant presence of its own. It’s interesting to me that the end result sounds like the experimental noise piece it is, but I did follow the pop song structure exactly

Nice! And now I know the other names for the red-breasted cockatoo

Yeah, I think the fan sound would be excellent for a binaural experience.

Red-breasted cockatoo! Never even heard it before.

Cut/copied/pasted in Reaper to create two verses ,two chorus’s , and a bridge from this material

All the rooms I go to are pretty quiet for the summer, so I recorded the quiet soundscapes of my apartment, my (empty) classroom, and my car (hey, I spend a significant amount of time there…)

I was in a bit of a crunch, so I used Ableton’s “convert” function to tell Ableton to figure out the harmony, melody, and drum rhythms of each recording. It was horribly inaccurate, but that was enough to give me raw material for the sound beds/recreations of each room.

From there I processed the room recordings slightly and moved them around. Most of them got a gate and then a delay. I moved the recording of the car to the end, because that was the busiest and seemed the most dramatic.

This was an interesting exercise in structure. I found myself using effects and mixing techniques and a little bit of instrumental arranging to create similarities between sections and make this whole thing feel like a piece.

Spending this week in Venice, FL, at The Herron House. Built by architect Victor A. Lundy (FAIA) in 1957 for the Herron family, the house was restored to its original grandeur by its current owners, Ursula Kohl and Peter Bartos, in 2008. It’s a masterstroke of mid-century American imagination, and a timeless time capsule that will always feel like the future.

Most of the house is open-plan (only the bedrooms and offices have doors), all the rooms, save one, have at least two glass walls, and there are two spectacular rooms within the envelope of the roof line that have floor-to-ceiling screens as their 4th walls separating them from the outside. The result is a house that breathes with its occupants (lizards included), creating an inside-out and outside-in soundscape that leaves you in a true suspension of time and space.

This piece was recorded inside the house during night and day rainstorms (Rooms A and C, respectively), as well as a clear morning (Room B). Most of the time, the house provides a serene silence, which I wanted to capture for the C-section, but the iPad mic is not conducive to recording nuanced calmness, so this piece captures none of the house’s tranquility. Rest assured, however, this has been a relaxing week, replete with luck to have graced its environs.

Went minimal to the max for this. Only mics I have down here are an iPad and iPhone, and only DAW is a GarageBand program I never learned to use with any proficiency. The project instructions said “don’t add any other effects or sonic material,” so here’s three rooms, with zero(0) processing, in loose arrangement as a song. Each room’s “stereo” tracks are two tracks recorded close in time, panned left and right. I’d call it unfinished, but I’m on vacation, slipped into another life, so I lost where I started. 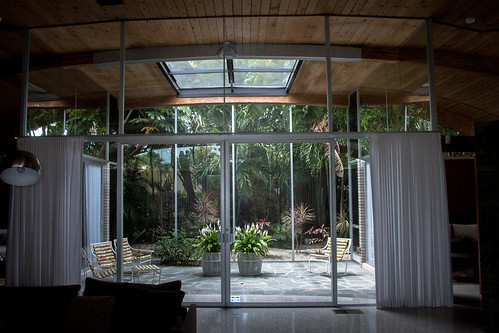 Rear sun room. This room is one of the two rooms with a screen-wall, and also has a massive screen skylight that allows rain inside. The tick-tocking sound (a short sample of which is looped as the Room A tone) is rain hitting the metal arm and vinyl-covered padding of a vintage outdoor rocking chair sitting under the screen skylight. 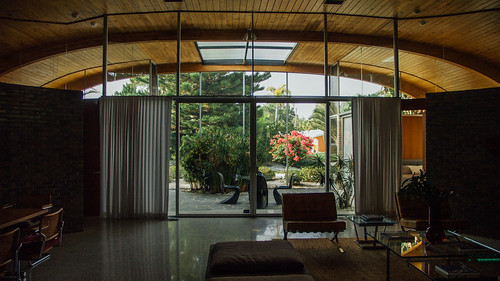 Front sun room, secondary entertainment and dining area. Like Room A, this room also has a floor-to-ceiling screen wall, which in this room’s case faces the driveway and gives vegetation obscured views of the street. This room has an opaque glass skylight, however, so remains protected during bad weather (aside from whatever might pass through the screen in windier conditions). The recording was taken on a calm morning while drinking coffee at the table in the room, and the local birds were out in full force in the palm trees and plants that shield the house. 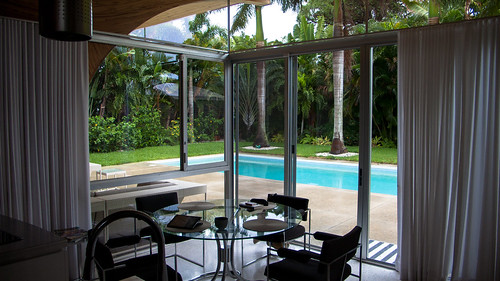 Kitchen informal dining area. Floor-to-celing glass-enclosed on 3 sides. Looks out on the pool and outdoor seating area. The downspouts from the roof are tucked away on either side of the exterior of this room. As a result, during rainstorms, sitting at the table results in a stereo clattering of water rushing down from the roof to the underground drain. The glass is true to 1957 vintage and single paned, so there isn’t much in the way of soundproofing the outside. The effect lends the sensation of standing behind a waterfall in a dry cave.

hello all, apologies for the lateness of my entry, some technical difficulties!
all fixed now so without further ado, here is my entry:

I recorded 3 spaces in my house:
the Kitchen
the roof space
and the airing cupboard/hotpress
these were all stretched slightly, then stacked and mixed in accordance with the suggestions,
cheers
Jason

I am sorry for the late entry, I have been away from home without access to my computer.
I wasn´t able to go to these places I would have liked to go to, because I was feeling rather weak, so I decided to
chose rooms when I had to go shopping. The first room was the sheltering house of a busstation, the second an
elevator, and the third the showroom of a large shop where I had to go to do my shopping.
I did not manipulate these sounds, I used them as verse, chorus and interlude, first short sections of the original
recordings, then parts of each of them mingled with cuts from the other ones.

Anyone else listening to these in layers? This is awesome for weight training for some reason… the wife comes in and just randomly clicks a soundcloud and for some reason it ends with the classical music and Karajan-looking like fellow on the youtube… I love this tuesday listening experience…

I look forward to “Tuesday listening,” too.