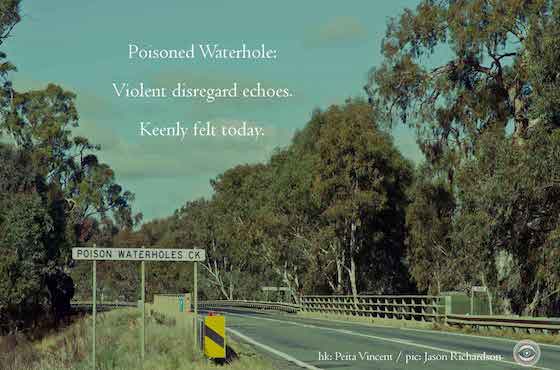 This week’s project is a collaboration with Naviar Records and Western Riverina Arts, spearheaded by longtime Junto participant Jason Richardson. The results will contribute to an exhibition in the town of Narrandera during October that incorporates haiku describing local scenes.

Step 2: Write a piece of music inspired by that haiku, which was written by Peita Vincent.

Background: This project is the brainchild of Jason Richardson. He has encouraged members of the community to write haiku describing local scenes. Those haiku have been turned into music as part of Naviar Records’ weekly Naviar Haiku series. The resulting recordings will join the haiku, photography and a textile exhibition Slow Book Haiku by Kelly Leonard Weaving and Greg Pritchard. There are also plans for Naviar Records to develop a CD featuring a selection of recordings. While the image of a poisoned waterhole speaks to many environmental concerns, the location earned its name during the “Frontier Wars” of the early 19th Century when the indigenous Wiradjuri people resisted European settlement. In the 1830s, several groups of Aboriginal families used to camp by the waterhole. Annoyed and eager to get rid of them, the local homestead owner poured drums of poison into the waterhole, killing many of them. This discussion comes as contemporary Australia reconciles colonial history.

Step 1: If your hosting platform allows for tags, be sure to include the project tag “disquiet0295” (no spaces) in the name of your track. If you’re posting on SoundCloud in particular, this is essential to my locating the tracks and creating a playlist of them.

Step 3: In this discussion thread at llllllll.co please consider posting your track.

Deadline: This project’s deadline is 11:59pm wherever you are on Monday, August 28, 2017. This project was posted in early afternoon, California time, on Thursday, August 24, 2017.

Length: The length is up to you.

Title/Tag: When posting your track, please include “disquiet0295” in the title of the track, and where applicable (on SoundCloud, for example) as a tag.

Linking: When posting the track online, please be sure to include this information:

Thanks to Jason Richardson, who proposed the project; Naviar Records, which is collaborating with Richardson on a series of haiku, as part of the ongoing Naviar Haiku community; Peita Vincent, who wrote this haiku; and Western Riverina Arts, which is hosting an exhibit that will include music from the haiku series.

Photo associated with this project is by Jason Richardson.

Hey, I’m a bit confused here as this project seems to completely overlap the naviar project posted yesterday.
I already contributed a track for the Navairhaiku project, I wont upload the same thing , change tags, re-title (disuiet0295 instead of naviarhaiku190) etc, what’s the point?
Or the idea is that we create 2 different tracks in a week, inspired by the same thing, etc??
I’m pretty sure there’s something I don’t get on my side,
Please enlighten me.
Love

Hi. You can just add the disquiet0295 tag to your existing track, and I’ll add it to the playlist.

Hi, as a tag, not in the title right?

You can probably do either but I do both.

Thanks for contributing your music to this project. I’ve really enjoyed your tracks.

Why do I feel like I’m cheating? What’s wrong with me?

No comment on the cheating aspect of things. (g)

Here’s a recording from the location that I made using an electric guitar, which has a “Nashville” tuning that’s an open E minor.

There’s more on my blog.

Thanks to Marc for sharing this project and thanks to the Junto for joining the Crossing Streams exhibition. I’m looking forward to hearing your responses.

Thanks Jason, enjoying your contributions myself (music, images and as idea-project-man).
Enjoying a lot.

I’ll probably create an specific junto track as well if I have time and inspiration to get into the same subject from different paths.
Haikus are good for that, aren’t they?

Can you cheat at Juntos?

Yes, I’ve an idea from a different haiku to develop another response.

One of the haikus that hasn’t been used came from my partner Jo Roberts and I’ve been thinking about it since I made my recording:

It leads me to think about a composition that will complement the Em tuning of the guitar.

Yes, I think the guitar was tuned EGBGBE and the rain hitting the strings gave that arpeggio-like result. It was unexpected and you can hear the strings start becoming muted as they got soaked.

I’ve been meaning to try letting the wind play a guitar. First learned of this approach from Garlo Jo’s Vent de Guitares project.

Hey All, Well this will be my second go at this as I partake of the Naviar Caviar also. I like how the brevity of haikus create such strong images and create a specific feeling in such a short span and really lend themselves to sound. Very sad about what happened to the Wiradjuri but it important that the truth about what happened is known and not lost in time as is often the case. I went down under on Freesound using the following
275264__dylanbigdaddy__clapstick-beat-5
85776__sandyrb__didgeridoo-01
379909__franeknflute__carnarvon-3.wav
65497__pogotron__cicada
7209__corsica-s__people-sitting-by-fire.

I moderated a discussion earlier tonight on grief and loss, so I needed this–cathartic. I tried to evoke the horror of the haiku–the image of parents finding their children lying by the lake at nightfall, poisoned by the water. I guess it’s a kind of threnody. I find it hard to listen to, but given the subject matter, I suppose it should be.

the basic pieces used to construct the piece were:

–a recording of backyard nighttime noises (using my wife’s phone)
–a synth1 patch I made (sort of string-ish)with some minor 2nds
–a Z Vex Fuzz Factory set so that it’s driven to internal oscillation (no instrument plugged in, just a cable), fiddling the controls to modulate it
–on the outro, a solo drum tweaked a little for extra resonance

not much in the way of effects except limiting and some reverb. I did layer the Fuzz Factory tracks by creating multiple copies and then detuning and panning some of them. This created a lot of density (so much that Soundcloud suggested the tag “Black Metal”! fond memories of my teenage days listening to Venom!!)

See also some of Ex Easter Island Head’s work - saw them open a concert with three guitars tuned to different drones, and three oscillating desk fans in front of them. They slowly turned the fans on one by one. It was magic.