As mentioned in Disquiet Junto 0325, Suss Müsik loves the sound of surface dust on a vinyl record. We are also fans of composer Danny Clay, whose work explores territory between the guardrails of chance and curiosity, often finding musical significance in random pairings.

Perhaps Clay’s most inspiring works are his collaborations with elementary school students. In his piece 27 Overtures [after Ludwig van Beethoven], a group of 3rd graders were asked to draw graphic scores in response to hearing Beethoven’s Grosse Fuge. The “scores” were then arranged and performed by a string quartet. Suss Müsik was particularly struck by one student’s interpretation: a boxed sequence of arrows on the scoresheet pointing edge-to-center.

For another Clay piece, elementary school students from Zion Lutheran School each drew and recorded their own graphical “note.” One student wrote the words “low long soft” to accompany her/his drawing, perhaps as a reminder on how the “note” should be performed. Wonderful stuff.

Jon Fischer’s work resides in a similar intersection: the relationship between ambiguity and rigidity, permanence and decay. Tricky Triangle is a series of printed works that portray the passage of time as “one of the least understood aspects of human existence.” Turn Table Drawings does this concept one better, constricting pen-to-paper actions to the rotations of a record player. Lines become loops, loops become forms, forms become evidence.

For this weird piece by Suss Müsik, surface noise on a turntable was broken into four fragments and looped through a Moog low-pass filter. Six sine waves in various tones were then played edge-to-center on a theremin emulator using a self-imposed “low long soft” rule: keep it low, keep it long, keep it soft. These swim lanes converge with a deepening sine wave before being released into random artifacts.

The title is Fischerclay. The image is an imprint of one student’s “score” overlaid onto an excerpt from Turn Table Drawings.

Suss Müsik thanks Mr. Clay and Mr. Fischer for allowing their creative work to be interpreted for collaboration.

Hey there, here is my contribution

Process:
I had a look at the work of the artists mentioned above. I saw the point and wondered how can I make sine waves that are played by unusually surfaced records? Some time ago, I got an old turntable on the flea market because I wanted to somehow listen to tiny records that I found on my mom’s attic. They were from a speaking toy parrot, that had a little toy record player inside. This however, was lost. With a diameter of about 5cm only, the mini records were of course not suited for a regular record player. anyway I tried to play them and recorded the noises, which were very scary. At the end, the records were just skipping and these parts I took out of the recordings (to leave out the scary parrot voices) and glued 4 of them together to a 1 minute wav file. This I used instead of an impulse response for processing in convolution reverb. I fed short sine waves of different frequency into the convolution reverb and let the reverb bounce about as it pleased. I EQd it so that the record noise is still audible as well.

Hi All. Firstly, the midi tracks were all played on the ES2 synth in Logic. I attempted to make them as Sine-y as possible. I found the vinyl sample online.

Next, I unintentionally but obviously ripped off the bassline from Joe Jackson’s “Is she really going out with him?” I regret this but I think it sounds good lol.

Half way through recording, I stepped out of the room for a moment. While I was gone, a magical being who definitely is not @Justmat laid down a sweet tinkling sound. Amazing!

Lastly, the title is derived from a joke about Sines being a Mel Gibson movie. Mel looks great, doesn’t he?

Not currently having a turntable in the house I turned to the net and found this wonderful collection of vinyl sounds: http://99sounds.org/vinyl-noise-sfx/ Thanks Chia!

I found some rhythmic activity that inspired me in the collection so pulled some into Ableton and started playing, before long a bass was needed, hello sine wave.

The command "Before proceeding, consider the sort of music that might be conducive as partially-heard, partially-background music for an art event” had made me think of bits of melodies poking up so added some more sines as chimes and some bits of melodies.

Not the ideal week end for junto here, have to play some challenging music live…
This one was created today in a rush, will re work on Monday but here it is.

this is ¶radio hummingbird’s contribution to this week’s disquiet junto with the serial number 0326. in short, the requirement for this contribution was to create a piece created only by vinyl crackles and music made from sine waves. the track is a collaboration between the disquiet junto and the artists danny clay and jon fischer.

for this track, i utilised my little travel eurorack modular synth kit plus the infamous “field kit”.
using a tiny computer fan and recording its electromagnetic crackling sounds with a special pick-up mic all the crackles have been recorded by myself with a little help extra help of some down-sampled crackling field recordings through the “radio music” module. having several thousand old vinyl records in storage overseas, unfortunately in the latitudes i am currently residing access to real vinyl and associated playback devices is almost non-existent. for this reason, i had to be a little creative in creating sounds which could as well be real vinyl crackles.
the sine waves have been created by the befaco “even vco” and the 2hp “osc” modules. both outputs have been filtered separately, inverted, cross-modulated on several occasions and sent through a spring reverb and delay just to be mixed with a sum of their pure out signals in the final signal chain.
light mastering in ableton live and this is it…please enjoy what you hear………

oh yes, and this is a little #1minute clip from when the system was set:

I used a 1920’s era hand cranked Victrola for this week’s challenge. Pre-vinyl 78 RPM records are slabs of brittle, easy to break shellac. There’s no electricity involved, you crank a handle to wind an internal spring, which spins the turntable. The sound is amplified through an internal chamber that you can control by opening or closing the front doors of the machine. The Victrola uses steel needles that remove significant amounts of the record material as you play them. You can see the shavings as the record plays. The needle needs to be replaced after every play, as it starts to round the point which will damage the records even more. The Victrola has a small bin that holds hundreds of spare needles. Using the record destroys the record over time. You can’t listen to it and preserve it, you have to choose. We choose to listen to our records.

Recordings from our Victrola, manipulated in Morphagene, combined with DPO lightly filtered by Three Sisters and occasionally run through Phonogene in broken tape echo mode. 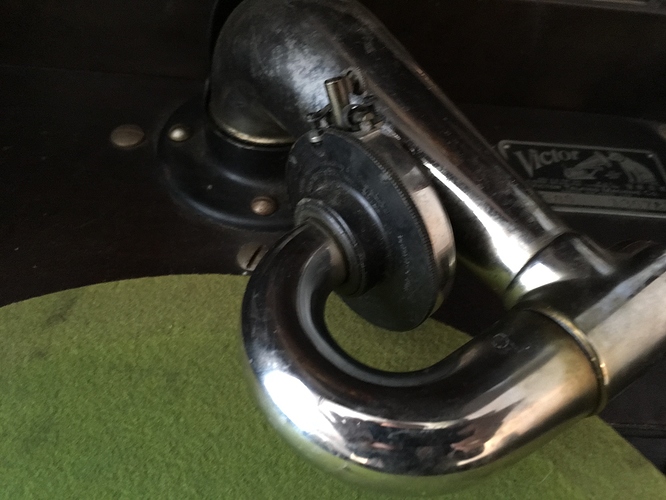 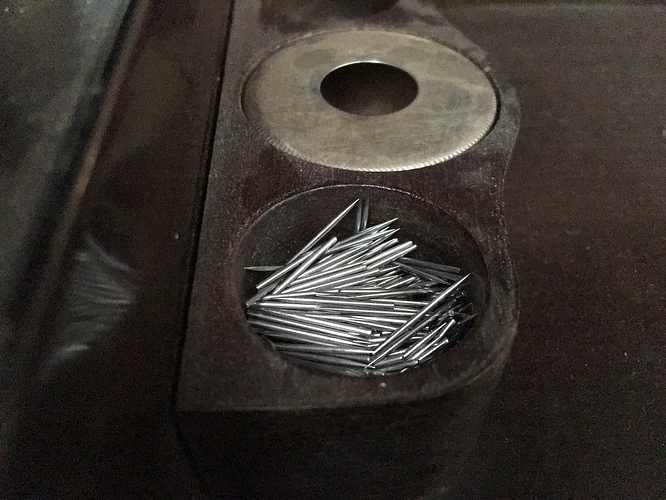 It has been a while since I participated in a Disquiet Junto, but I had a spare moment this afternoon to play around a bit with the manifold possibilities of sine FM/AM modulation of a simple sine wave oscillator in the ER-301. Only sines were used to shape, mangle, and otherwise modulate other sines with some modulation by hand of various parameters described in the track notes. Vinyl noise incorporated early in the process to add some crunch but not stand out too much in the final output.

https://soundcloud.com/mtnviewmark-bits/organ45-disquiet0326
45rpm is harmonically G if you choose A = 432 Hz. This track is composed only of sine waves and samples of 45 rpm record surface noise. The samples are heard normal speed, shifted up 4 octaves, and up 8 octaves. The later are then used as basic timbres to be played chromatically, and harmonically with the sine tones.

There is very little other processing on the sound, just some eq and a touch of compression here and there.

The sine tones and 8 octave up noise samples were composed at a keyboard. The 4 octave up noise I worked like splicing tape. The unprocessed noise were placed throughout for pacing and emotional effect.

It might help to listen through headphones to be able to pay attention to the unprocessed noise musically.

Started with a couple of sine wave samples from Abelton. They were short, and I couldn’t match up the ends that well, so I also used (some copies of) operator. Changed pitches with frequency shifter to get an interference pattern. Also had some simple delays which were enough to get some vinyl like crackling.

https://soundcloud.com/ohm-research/synoise-disquiet-0326
Vinyl surface noise looped with a Digitech RDS-8000 and modulated by a sine wave from a .com Q106 oscillator, which also provided the sine wave accompaniment.

It’s been a long time since I’ve participated. I’m impressed by the write-ups some people have. I’m afraid mine will be pretty brief.

Sounds sourced from free sound.org – see soundcloud description for more info. There are a few bandpass filters followed by audio -> midi triggers that play sine waves in absynth. The sine wave output goes through a reverb wash. The turntable sounds are mixed in, and sometimes fed through 2WarpDelay (which is also, in turn, fed into the reverb).

I love how this feels like it is suspended in a frozen moment when the needle has gone down, and not yet started the track - like we are exploring that tiny gap in anticipation - and finding wonder. Really wonderful!

Hi,
This is my first post after lurking around the forum for years (maybe because my english is quite poor, I apologize!).
In the last months I tried to submit my contributions to the Disquiet Junto.
I listened all the tracks and some of them are awesome and a source of inspiration as usual!

Process:
A 2 second loop of the turntable noise is repeated throughout.
The sine wave was pitch-shifted, cut and stretched. The products were arranged in a quasi-random order.

The first one I completed on time!

Two samples of record lead-in and lead-out, run through some granular synthesis, delays and filters with lfo-modulation, and a simple sine patch created on u-he Zebralette. Everything in convolution reverb (of a nuclear reactor). Done in Live.

First time posting on Lines after a couple weeks of poking about! Glad to be here–the community seems lovely. It’s also encouraged me to dig in on some Monome kit–I received a grid and teletype in the past couple days, excited by the opportunities they’ll unleash!

As for this track, it’s composed with sampled and held Quantum Rainbow/Woggle combo attenuated for clicks and pops, self-oscillating Three Sisters for bass, STO for cupped plinks and plonks, sequenced by Sequins, lightly combined and pitched down in Live.