I wasn’t terribly inspired this week, but I wanted to get going agaIn after a long absence so I just did what I could. For the samples, I plugged in a contact mic with lots of gain and touched various things with it, then chopped up my recording and edited some of the sounds in Ableton Live. I ended up with 7 samples I found interesting enough, which you can hear at the beginning of the track. As for the rest of the track: I wasn’t terribly inspired to make music either, so it is what it is.

I wanted an Autechre-ish “stream of percussion,” so I experimented with using Ableton’s arpeggiate command on the percussion sounds. It created some good results, but it took a lot of finagling to figure out how to make the MIDI notes random but also constrained to the note values that trigger the drum samples (as opposed to flying up and down the 1-128 note range…)

You can see the FX chain here: 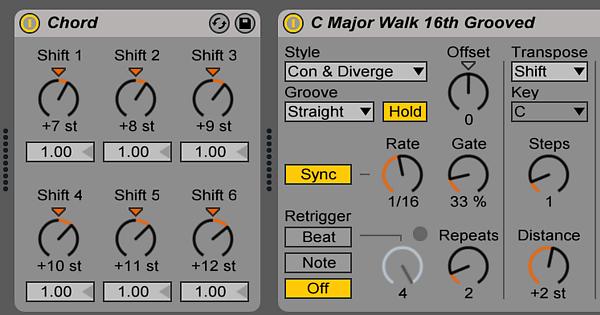 (I think I may have created some redundancy with the scale plug-in).

I copied the melody to the drum tracks, and set up an FX web so that every note of the melody triggered the “kick” sample (which was my palm banging on the mouthpiece of the tuba).

Every note also triggered a cavalcade of percussion - but this track was gated to be silent when the “kick” track played.

The results were generally good, but a little beyond my control - in other words, satisfying!

The melody is played on a sample of the lowest note of the tuba, and doubled by an Ableton synth. It’s an atonal melody (I’m getting ready to teach a unit on atonality in the fall), everything is a variation on the initial cell of {3 1 8}.

Here’s my scrawled score, for those who are into that sort of thing: 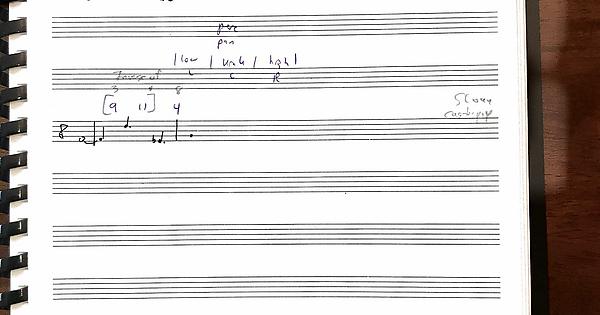 This project really made me learn a lot more about Ableton drumsets and MIDI fx!

Drum sounds are all samples from my eurorack modular. They range from pure, completely patched-from-scratch sounds to using drum modules such as Basimilus Iteritas Alter and Akemie’s Taiko.

I sampled them into my Synthstrom Deluge, then created a track around them with the internal synths of the Deluge.

For the kit, I used Geist2 to slice and reshape bits of a previous recording, which was created using Glitchmachines’ Cataract to scan through and manipulate other previously recorded audio. Then I programmed some patterns in Geist2 and spliced together parts that I liked.

My approach for this challenge was to create each component and particular sound of my desired drum machine from my monophonic analogue synthesizer followed by performing a Jam around a piece of a track.

Best drum machine for me are analog synth. So I used a Dave Smith MEK to make a kick bass. So I can modulate it with almost infinite possibilities.

Then I made a little live jam with only the MEK and just a reverb in ableton. This is the raw output of this jam.

If only I could have 10 MEKs so I could jam live with a complete drum kit.

There is the starting bass kick at the beginning, but the entire track could be sliced to make drums samples.

Spent a lot of time on my eurorack rig making as many drum patches as I could! It all started with an Enveloped Dixie 2 and ended up with a 0-Coast Snare.

Try to jam with it all patched but did not like the result so Sampled it all into the Digitakt and brought the analogfour to jam on top of it.

A lot of fun on this one.

Hypoid’s Cheap-as-Free Canned Beats. Turns any meal into a drug fueled dance pit. Suitable for all occasions and seasons. And remember, they’re not just good, they’re good enough!
https://soundcloud.com/hypoidsound/canned-beats-disquiet0345
The drum slices of both original and after Patterning 2 ratchet stutter fun. The second have a bit more character. Sorry, I just had to do it

I did what any bedroom-producer would do: I went about my bedroom and found objects that made noise, perhaps when struck. Fortunately, I have a lot of curious objects in my bedroom!

I then selected various hits, applied a small amount of processing on each one to bring out what I thought made it special. This was mostly EQ and compression, but occasionally a touch of reverb.

The two parts of the beat were made two different ways: First part in Ableton, written in by hand, and played with basic overall processing on the track. For the second part I transferred all the samples to my Digitakt, rebuilt part of the beat… but then added and processed from there.

My current preference for drums is a collection of various metallic or mechanical clicks, clangs, thwacks and whirs, without any attempt to emulate a traditional drum kit. For this assignment, I used Audacity to create a set of similar sounds by chopping up a recording of an ice cube being shaken in a water glass (made for another Disquiet Junto challenge which I never completed). For effects, I mostly altered pitch and/or duration of the ice cube samples, with a instance or two of filtering and reversing.

The following song has three sections, each with a drum part, a vocal part (featuring Klevgrand Jussi and samples from the Camel Alchemy Dream Voices soundset), and an accordion part (using samples from the Detunized Bellows Live Pack).

Getting the samples tuned and eq’d to sit right was a bit tricky.

The samples really sit well together. You clearly mastered the tricky! I could listen to a lot more of that, bravo!

Just a reminder to folks who made beats this past week: please make your track downloadable, so that other Junto musicians can make use of your beats as part of their tracks this week.

If anyone would like to work with my video, I’ve uploaded the raw parts here