Was sitting in a suburban train near midnight. Only one other human being in the cabin. The guy spoke loud in an unknown language (which I recorded). Pretty spooky. Finally he left the train. What a relief - as you can hear!!!

Be patient! It´s a beautiful track!

It is two part : Scare/Relax.30 bpm. Scare let you hear the guys voice. With some additional distortion. Relax is an endless stream of notes based on a Dorian scale programmed on a Future Retro Zillion. It can run forever…

I live in Boulder, Colorado. Stephen King wrote The Shining here, he based The Overlook Hotel on the Stanley Hotel in Estes Park. Doesn’t get much creepier than that. Any hotel that can influence Stephen King is more than enough creepy for me.

My 11 year and I went to the Overlook Stanley yesterday morning, took some pictures, recorded a whole bunch of field stuff, then came home. Most of the field stuff was useless. People can’t find the bathroom. That’s what we learned. We have…a half dozen?..recordings of people asking for directions to the bathroom.

The samples we did use included creaking. Which is key. We wanted to hear the hotel.

Then we recorded a short improvised piece, with the boy on flute and me on Sruthi box. A whole lot of manipulation and layering later, we have this…

Sadly, it’s kind of relaxing instead of disquieting. That’s ok though, the process was really fun and this is the first Junto project that the kid and I have worked on together.

Here’s a few more pictures of the Stanley, I also took a handful of film pictures, which are more susceptible to haunting so

I’ll get at least one ghost. 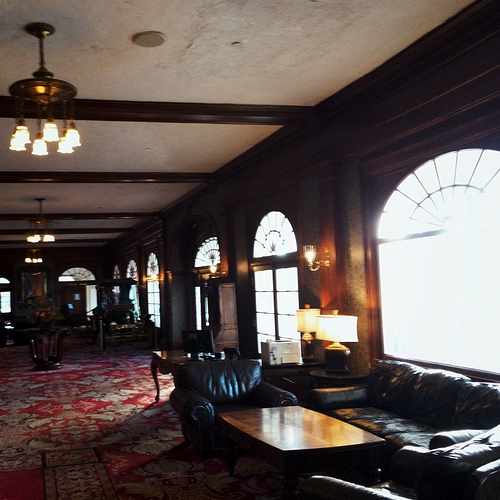 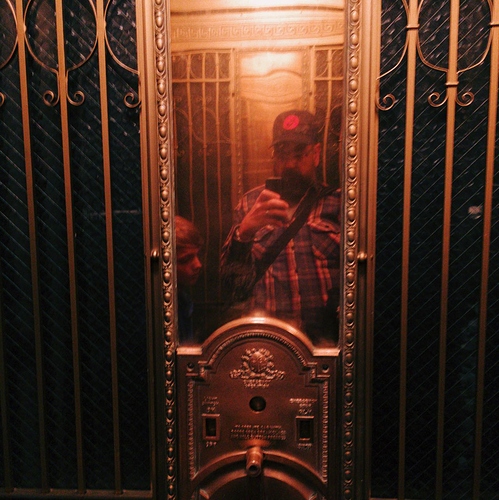 At my parents’ house there is a harmless-looking halloween knickknack that, when you pick it up, emits a theremin sound, which you can modify by alternately muffling it and waving it about. This, and paulstretched and echoed versions of it, form the core of the track. Excerpt from the poem Walpugisnacht by David Lewis Paget (2012) is read by me, and the proto-syllabic module sample is one of Martin Howse’s ERD/WORM studies (“software worming of emulated artificial human speech cores from the 70s to the 90s”). Also in the mix is a very paulstretched sample of the Maypole Song from The Wicker Man.

While researching some place-based eerieness, I came upon the work of Leif Brush (http://www.d.umn.edu/~lbrush/), who is new to me. I was very inspired by his windribbon (link from internet archive: https://archive.org/details/WindribboningConjoiningRealtimeWaves). From the track description:

There was a chapel I knew as a child: fear and joy came in quick succession there. Brimstone whispers, tearful confessions. I assuaged drones from a teisco hollowbody, screwdriver wedged between strings as a false bridge, pedal steel bar occasionally adding additional vibrato through a boss reverb stompbox with Ebow and electroharmonix freeze. High wind prophet 08 mixed low; melody drawn from the aforementioned teisco- contact mic in an f hole. I ran the signal through an electroharmonic mellotron pedal for some dusted flute. I reversed here and there. Simple heartrate Volca beat. This is my first disquiet junto piece, but I’m grateful to be a part of this. I’ve made it downloadable. If looking to remix, feel free to use this song. I can provide individual stems and tracks, just kick credit back to me where you can.

Inspired by some nightmares, some vivid hallucinatory experiences while reading William Gibson, and a fusion of future fears.

Place of unease, eeriness, or disquiet: the place of haunted thoughts, where confidence is lost and confusion exists, running through the empty halls of a deserted arcology, not knowing where to go or what’s pursuing - or even if pursued. There’s nowhere to hide, only endless, faceless hallways…

My production skills have a long way to go.

This is my first Junto piece. Thank you for letting me join your beautiful project.

May this Samhain open the doors that you need opened, and close the ones you wish closed.

For the ‘specific space’ I used the inside of my piano. Recorded on a Zoom H5, edited with Audacity.

Quote: “A brand new piano destroyed”, he gasped, “It was just mind-boggling.”

I was thinking of a fog covered field in the moon light. I used additive synthesis for most of the sounds, 5 or 6 instances of Image-Line’s Morphine synth. The whole thing ended up being a bit of a blur.

I like how you termed to it as being “a bit of a blur.” That seems to be one of the most interesting things about Disquiet. It forces you to work with such speed that overthinking is kept at bay.

Hugh - Actually, the largest voting block is the group of people who didn’t bother to vote. That didn’t happen as much years ago when they were grabbing us, giving us a gun, and telling us to kill people that were trying to kill us on the other side of the world. My hopes and expectations are that these people, and many of those who decided upon senselessness as a lark, will be reversing the current direction and I will be offering a piece that is about five months in the making called Sunset, Sunrise that documents this feeling of hope within the week.

Hang in there dude, sometimes people need to have something taken away from them before they realize that they need to do something, which is what happened fifty years ago, as I well remember. (g)

I admit: I was lazy and just threw together some half-finished pieces with different levels of spookyness, which may be heard in a dead café which serves absynth.

For this Junto submission the location I chose is underneath my back porch. I didn’t record anything there specifically, but instead chose to create a soundscape depicting the imagined feeling of being trapped under there…

The layers I used include: Sine tone, a long, looped synth note, an electrical line buzz, a swedish train station, and granulated phone beeps. All the recordings were made by me.

I’m in Baltimore for work, and the housing I’m in has a lot of really great buzzing fluorescents, so I grabbed a bunch of recordings using both the XY head on my Zoom H6, but also a pair of binaural earbuds by Roland that I’d brought along (evident at 2:24).

I sure had fun for this one, I have a thing for Halloween. This contribution was made with Roli, Nord Stage 2 tracked on a Sure 57 , The MIDI was captured also into Live session with the Roli and then combined with the audio from the Nord from the jam session that was in Protools. Vocals on a rhode ntg1 shotgun mic into SSL. I have been taking images of masks, Riverside grave yard was used to capture some of the images for this creepy day. When the Junto message came up I was all in to scream for a minute in the studio and pull out some evil text. This was too fun!

A recent trip to Ohio was filled with blood (relatives), ancestors, and graveyards. One sunny, windy day we visited a smallish graveyard, adjacent to vast cornfields, to help a family history buff search for tombstones of our distant relatives. Along with the sound of wind whistling and gravelly footsteps, were ringing wind chimes - dozens of them - placed at graves throughout the site. A few families lent extra personality to their gifts: a set of chimes made from recycled glass bottles, one with rad fake skulls affixed to the top and bottom of the chimes, and one grave with pinwheels that rattled noisily in the quick wind.

The effect of it all was like stepping into a mystic’s tent - the chimes ringing out at the entrance, doorbells to another realm. I couldn’t help but think about who the chimes were really for: those of us listening on this side of the door, or those listening beyond.

All the sounds used for this piece are the field recordings of wind, wind chimes, pinwheels, and footsteps captured at Preston Cemetery in Alger, Ohio on October 3, 2018. The recordings were edited into small clips in Audacity, and then imported, processed, and the piece performed live in one take through the Borderlands Granular app on an iPad.

Welcome aboard the Junto, Scott.

A lovely, dark piece… Looking forward to hearing more of your experimental side around these parts.

Thanks so much! I really enjoyed supporting you on that show last month. Hopefully we can do it again soon.