Welcome to the penultimate Junto project of 2018 — and thanks to Todd (@Toaster) Elliott for having proposed it.

If you’ve been participating in (or observing) the Junto for awhile, you know what the next two assignments will bring. This coming week’s, on December 27, will have a slight tweak from past years, but it’ll still be familiar, and we’ll start 2019 as we have every year since the Junto began, back in January 2012.

One note before proceeding:

I’m excited to announce that there will be a special Disquiet Junto Project in 2019 that will occur apart from the weekly project sequence. I’ll have more details as it comes together, but I can for now comfortably say that it will involve snail mail and collaboration. Unlike the weekly Junto projects, this extra project will allow for more time for developing your music. For the time being, think “Chess by Mail.”

And now, on to this week’s project: 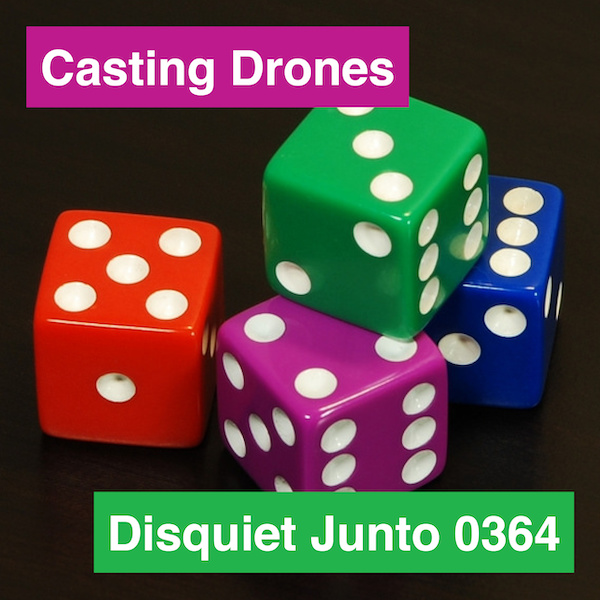 Many thanks to Todd Elliott (aka Toaster) for having proposed this project.

We’re going to use chance operations to make drone music (giving credit to John Cage, in particular for the compositional concept of time brackets). You’ll need some multitimbral sound sources that are capable of making sustained tones, or you can just write out the score and build up the drone via overdubbing.

Step 1: Create a single sustained tone that can be held for as long as necessary. This will serve as a “base” for you to add onto in subsequent steps.

Step 2: Roll two six-sided dice. The first die will be “time” and the second die will be the “notes.” Do this two additional times, so you have notated three pairs of time-plus-notes.

The resulting time is the length of this segment, or bracket, of music. You’ll have three time brackets at the end of Step 3, resulting from the rolls in Step 2.

Roll 1-4 = For the first bracket, this is the number of notes you can have playing at a single time. In the second and third brackets, this can also be interpreted as the number of notes you might, alternately, elect to change. Any introduction of notes or changing of notes should be done slowly and subtly — in other words, since this is drone music, the divide between brackets isn’t instantaneous. You should never have more than four notes playing at a time. If you already have four notes playing and you roll four, you can’t add more — so, instead change all four. If you have fewer notes playing than you roll, either add notes or change notes (player’s choice). For example, if you have three notes going, and you roll a two, either change the two notes or add one (to get to three).

5 = Remove one note. (You can never have nothing playing — the sustained tone in Step 1 should always be playing.)

6 = Remove two notes. (Again, you can never have nothing playing — the sustained tone in Step 1 should always be playing.)

Step 5: The full length of your piece will be the combined length of those brackets plus one additional minute for a slow fade. During the last minute, you should remove all notes (at the pace and intervals you determine), and fade to silence. Throughout the piece, the foundational tone from Step 1 should be playing (until it also fades out in the final minute).

Bonus Round: If you’d like to, extend your piece to a length of one hour and one minute, and it will be considered for a run on the Dronecast podcast. The episode will include a link to your SoundCloud/Bandcamp. Note: the Dronecast is not a paying gig. (If you don’t want it to run on the Dronecast, feel free to say so.)

Six More Important Steps When Your Track Is Done:

Step 1: Include “disquiet0364” (no spaces or quotation marks) in the name of your track.

Step 2: If your audio-hosting platform allows for tags, be sure to also include the project tag “disquiet0364” (no spaces or quotation marks). If you’re posting on SoundCloud in particular, this is essential to subsequent location of tracks for the creation a project playlist.

Step 3: Upload your track. It is helpful but not essential that you use SoundCloud to host your track.

Step 4: Post your track in the following discussion thread at llllllll.co.

Step 5: Annotate your track with a brief explanation of your approach and process.

Step 6: Then listen to and comment on tracks uploaded by your fellow Disquiet Junto participants.

Length: The length of your track is up to you.

Title/Tag: When posting your track, please include “disquiet0364” in the title of the track, and where applicable (on SoundCloud, for example) as a tag.

Context: When posting the track online, please be sure to include this following information:

More on this 364th weekly Disquiet Junto project — Casting Drones / The Assignment: Use dice to determine your slowly shifting tones — at:

Many thanks to Todd Elliott (aka Toaster) for having proposed this project.

There’s also a Junto Slack. Send your email address to twitter.com/disquiet to join in.

Image associated with this project is by Pablo Ruiz Múzquiz, adapted thanks to a Creative Commons license:

The project is now live.

Am I right in interpreting these instructions as saying that a 5 or 6, rolled for notes for the first bracket, should result in a maxed out (i.e. four tone) bracket? Or does that rule only apply to 1-4, and a 5 or 6 in the first bracket just means “hang out with that original tone since you can’t drop any”? (My first Junto! Apologies if I’m being overly literal, but I want to follow the rules!)

I’ll defer to @toaster, but that’s how I’d interpret it. Alternately, it could also mean just stick with the underlying tone from Step 1 for that bracket. I didn’t realize this is your first Junto. That’s super!

Thank you to TOASTER for suggesting this challenge. I really enjoyed it.

I was surprised how close this sounds to an EP I wrote recently based on the formulae of four simple acids. Or maybe not - just my habitual choice of plugins!!

My first real attempt at a drone. Thanks for the hints Mark gave. Sorry for the cheesy resonators and (slightly less cheesy) convolution reverb.

I guess the drops at 2:00 and 2:20 are not really drone, but I think that kind of stuff can add to the interest. I also found that my emotional relationship with the music is different for a drone.

Loved the ominous crackles that you mentioned. They definitely add to the atmosphere.

I have the same question as I rolled a 5 and a 6 for the first two brackets. But the numbers for the first bracket only go from 1-4. What should I do ? Other then keep rolling die.

I’d say you have a choice. Either (1) go with the ceiling of four, or (2) interpret it to mean go with the floor of zero, which would mean only employing the foundational tone from Step 1 for the duration of the first bracket.

I’d say that you’d go with the floor— however, the original piece went on for an hour; given the fact that it’s a much shorter duration, I might be tempted to reroll, myself. :-).

If you have fewer notes playing than you roll, either add notes or change notes (player’s choice).
I think I will try this way.

I made a little video of me preparing - using my sequencer in random mode with a very fast clock as my ‘dice’.

Hi all, feels good to be back here

Thanks Toaster for the challenge, came at the right time for me!

My setup for this is pictured in the track image: amplified kalimba with a freeze pedal for the drones, adding a ring modulator in the mix for additional ebbs and flows. I have some power issues, so the chain is a bit noisy, something I have learned to embrace as I feel it adds some lo-fi touch to the whole thing. Minimal fade-in and out in a DAW as my multitrack doesn’t do that as perfectly as I would like.

And with this, enjoy the Christmas break everyone, I am now going to treat myself following this thread, cheers!

Dice roll (as shown in picture) gave me:

So if I got the instructions right:

1 minute of 4 notes (I add a Codex B, an AAS Ultra-Analog C# and a bowed low A on my upright bass)

I used filter on the Harmonium track, reverb on the other.
Performed on Friday December 21st morning in Paris , France.

Wish merry Christmas and a happy end of the year to everybody. See you in 2019.
Love DD

I really like your contribution - amazed that you can get so much out of the kalimba.

I also like what you said about “embracing the noise”. I’m often amazed at the high quality of the recordings here. My set up is pretty basic - and sometimes noisy - but I too am learning to accept the darkness, the buzzes, and the hiss. Let’s just say it adds a distinct flavour to the proceedings!!

My first go at a Junto project but I couldn’t pass on chance based drone as its my catnip.

My effort is here

It’s recorded live in one take with no overdubs or post-rcording editing other than the fades at the start and end.

My dice gave me sections of 6 minutes, 6 minutes and 1 minute with 3, 4 and 2 notes respectively. I also used dice to determine the root (D) and the note values.

I think I used just about every oscillator in the case. The photo embedded with the track is the patch (and the iPad I used as a stopwatch to help me with the timings)

Can’t think of a better way for me to spend the winter solstice so thanks for that.

Thanks they are from my changing the “size” parameter in ableton reverb on the fly, that seems to mess things up.

So glad you could join in. All oscillators are welcome.

been a while since I did one of these