i hope one day that i can learn to mix as well as you. great work!!

Found this one very difficult! I was really pushed for time but I did manage to complete something using tracks by @UntilledSound @tedthetrumpet @ZeroMeaning and @mzero

I created two main drone layers by loading snippets of each track into a couple of different granular synthesis apps. I then added a couple of small snippets that I liked, dotted them throughout the track, and drenched them in reverb.

Really like the sound of this, the kick sounds nice and deep through my headphones

I’m interested in how you used Mixxx here. I was considering downloading it recently to try to learn a little about mixing and djing, but creating loops with it also sounds like a great idea

Did you create some loops and then export them as audio to be used in Qtractor? Or can it be launched in Ableton / Qtractor like a VST and done in real time? (hopefully these questions make sense)

Hey @mdh, glad you liked it, it does sound a whole lot better with headphones (I realised after uploading it…).

Mixxx has seen a lot of development recently, and it is an excellent (open source) program for DJing, with a truckload of features – I really recommend checking it out.

The fact that it can take 4 decks, has good control over loops, a sampler deck (with some skins supporting 64 samples!) and quite a few effects (and the developers just added LV2 effects support in Mixxx 2.2.0, see screenshot), it means that it now can really be used as an instrument of some sort, or just a comfortable place to play around with finding loops in tracks. Also because it has quite a few mappings for midi controllers, and a midi-learning interface to adapt any midi-compliant gear.

What I did is that I put 4 tracks in to play around with loops on them, find the ones I liked, and then used Jack/Catia to send the Mixxx output into Qtractor to record an audio track while playing with levels and effects - pretty basic. I don’t think you can open Mixxx as a plugin inside anything else, it really is a massive standalone program. 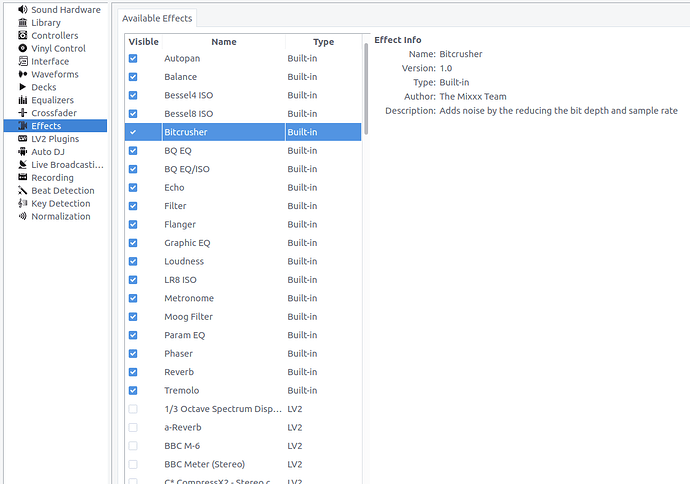 Yeah, it makes perfect sense, thanks for the detailed response

I would never have thought to make loops like that, so you’ve given me some inspiration for something to try out in an upcoming Junto.

). But you’ve certainly tempted me again!