Hey all. A month or so ago I acquired a Komplete keyboard (awesome) and the accompanying software. In this, yes, synthpop, song I use the Monark synth exclusively.

Drei Monstrum (disquiet0372)
I had two choices for this weeks prompt, VCV Rack and Sugarbytes Aparillo. Time was going to be short and mobile so Aparillo won by default. This app is quite appropriately named and the title of this weeks piece plays on that. I haven’t made many of my own patches yet and so I started monkeying with presets and came up with some interesting bits. This has so many perimeter adjustments, automations and options I’ll be busy for ages. And that’s without touching the orbit panel.
Three instances of Aparillo were loaded in Aum along with Rozeta Cells. I tried to use more, but the old pad was starting to crackle and hum. I played a pattern into Cells which routed midi into two instances of Aparillo, the lead sequence and the bass sequence. The third are what I labeled as accents, a crazy sounding percussive whale song transformation. The third part was played live while adjusting faders and tweaking the first two synths perimeters. That sounds way more impressive than it is.
I was trying for a melancholy hoping Spring returns soon feeling. This weather is making me crazy. Crazier, anyways. Cheers

Have a lovely week,

Well, „good“ is always subjective isn’t it? Right now I’m trying to do some more releases for the Music Library I‘ve just started, plus I‘m still working on a novel… yeah, I know the point of Junto is something for when you have time/ interest but I miss the interaction with the folks on here and the feeling of community when I‘m gone for a while…

Great piece, Jason! I kind of miss my old Kaossilator watching this. Still have a Mk1 Kaoss Pad somewhere that I should dig out again…

here is my contribution

The latest software I bought is S-Layer from Twisted Tools and it’s awesome!
Its a multi sampler tool with multi effect that runs under Reaktor.

The BPM and all automations are on a base of 28 multiples, and the track lasts 28 measures.
A full moon revolution

My latest purchase was the MI 0-Coast, so I created a patch using the two envelope generators at audio rate, with one of them having the rate adjusted by the random stepped voltages, to create a constantly moving and very gritty sound. I put this through a DL8 delay to add some depth, and recorded three takes into Reaper. I then used a pitch envelope on two of the recordings to create a melody and counter melody. So, OK, maybe a little cheating with the DL8 and Reaper. But that’s how this Junto thing works, right?

That bassline keeps giving me the feeling that David Byrne is going to start singing at any moment - love the track!

So there are three new things involved: the Casio MG-500 MIDI guitar pictured here, which I just bought used for cheap, and two programs I wrote to work with it.

Casio doesn’t have the reputation of supreme audio quality, but this is quite a good guitar; it’s said they were manufactured by Ibanez. I can do both MIDI and regular guitar at the same time and there’s a switch to choose either or both (which I used during this piece).

I wrote two pieces of code in ChucK to work with this guitar: one is a sound chain with echo, chorus, reverb, a bit of distortion, and gating–this processes the regular electric guitar audio. The other piece of code takes the MIDI output and triggers a sample from Nathan Moody’s wonderful collection that we drew on in disquiet0354, which I purchased not long after that. I run this two different ways during this piece–one is as a pitched sample, based on the input note; the other way (invoked later) chooses a random spot in the sample as the starting place.

I like this combo because it allows me to use my regular guitar skills to play something sort of musical, but it also offers up some fun surprises, especially as the MIDI can be a little glitchy (in a good way).

When I started photographing seriously, like many others, I suffered from GAS (gear acquisition syndrome). I continually felt that my photography would get better if I could just acquire more equipment. Eventually, I came to the realization that the camera is one of the least important aspects of photography as art.

When I again took up writing music I kept in the mindset that the acquisition of “things” would not improve what I had to offer, so this particular challenge is difficult because I am using the same software (Sibelius Ultimate) that I have used for quite some time.

So in the spirit of things, I decided to select instruments for which I have never written. As a lover of Wagner’s music, I had to include the Wagner Tuba. For some reason I have never written for the Baritone Horn - I played the instrument for two years in a marching band. Finally, I chose the Cimbasso, which is a Frankenstein combination of Baritone Horn and Bass Trombone.

I call this piece English Vignettes because I intend to use it to accompany a slide show of my Bromoil prints, which were photographed during a recent visit to England.

The score is available at http://bit.ly/2EcDiQL 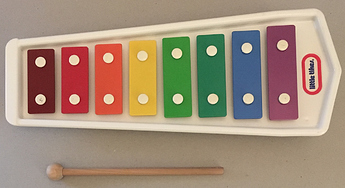 Last week I got a second hand Little Tikes toy xylophone. I decided to pay Six Unison Melodies by Bartók, but because of the single octave range, I only played the melodies 1, 2a and 3.

And then of the stereo recording, I transposed one of the channels down by an octave and panned them, and on top of that, I had some delay and reverb.

After spending all my spare cash on a guitar, pedals, and a very cheap midi keyboard, I’m trying to make music without spending another yen. Let’s see how long I can last!!
There are some amazing pieces of free software to be found. I just found “Dragonfly Reverb” (DFR), so I took this week’s challenge as an opportunity to see how far I could push this sweet sounding VST before it started wreaking havoc.
I performed this experiment using a short (edited) passage from the beautiful Ancient Greek Ashmolean fragment DAGM 61, very kindly made available to me upon request by Professor Stefan Hagel.

It took me a long time to get the settings for seven instances of DFR to run just right, but some interesting harmonics and rumbles emerge (especially in the return tracks).

Sections from other Ashmolean fragments appear throughout my soundtrack for Jorge Luis Borges’ The House of Asterion.

I’ve wanted to join in on one of these for a while - I didn’t realize it came from this forum. I’ve loving getting to know this place.

New Equipment Used: I just added a second Ditto x2 looper pedal and have been working with a Moog 984 Mixer (the Krisp1/Oakley clone) - You can get four loops going and send them into one another for some nice feedback and isolation on the mixer, and the Ditto loopers have a good half-speed/reverse option, which is fun to overdub in different speeds and directions. This is a loop from Takashi Mizuhiki’s DXi iOS app (also new, for me at least) - which is a DX7 emulator with some wonderful bell and wobble settings, played backwards on top of itself, then flattened to mono. Added a little Moog Model D and Metasonix at the end to pepper off the closing.

“Alone in Bed, Drifting to Sleep, Her Thoughts Endlessly Play, Viciously on Repeat.”

Eventually, I came to the realization that the camera is one of the least important aspects of photography as art.

This Honeymoon gets nasty… Last week I shot some used cheap guitar effect pedals on ebay (Donner Pearl Tremor, Eno XT-RV10 Reverb, Donner Time Wave, Behringer Vintage Delay). I think that can be considered as “last bought equipment”. For this track I used them altogether.

Everything you hear comes out of the effect chain – with no input. Especially the two delays, mainly the Behringer VD 400, which I bought used for around 13 bucks, are really the stars of self-oscillating, self-resonating trash sounds.

I recorded some takes and mixed them together to have more movement and to reduce the magnitude of just bad noise a little bit. It’s still very noisy … so I tried to be brief. Enjoy with pain relievers.

Here mine with my newest toy, arrived yesterday from Sardegna. The track was entirely done on [d]ronin instrument my Massimo Olla. I used a violin bow, e-bow, some drum sticks and Dedalus Delay by Amazing Noises.