Song created on iOS using Addictive Synth and Enso loopers. I played the song from my phone over a bluetooth speaker in the back of the house and then walked until I could hear it breaking up. Recorded on a DR-40 field recorder in the backyard for more ambience (and wind apparently).

Took a field recording of some birds and a small synth piece. Looked up some glitch routines with bluetooth and found the water bucket trick.

I had a phone I could lose (older one) so put the recording into the phone, ziplock bagged it, and got one or two good intermittent glitches out of the recording (fun to find!) looped them and then put together into this small piece. If you’ve been following these as a story, this track is the morning following the evening’s activity of the last five or six Junto prompts.

Thanks for posting this - The Conversation is the coolest film on recording gear ever made. What a great interview.

Awesome video!! Love when you put it in the can! That’s truly playful and cool, man.

“bluetooth decay” - I think I want this delay/distortion unit in my rig… Sounds great!

The concept of Transhumanism was first introduced in 1990 by Max More, who optimistically suggested that human capability would soon be augmented by our embrace of augmentative technologies. He wasn’t wrong; examples are all around us in the form of genetic engineering, artificial intelligence and biometric nanotechnology. A more common example might be the way hearing aids and cochlear implants enhance humans’ ability to interpret sounds.

“We favor morphological freedom,” said More. “[We support] the right to modify and enhance one’s body, cognition and emotions.” Suss Müsik agrees. There are, however, ethical and social considerations. If a computer is not yet able to interpret context, then how can it be trusted to accurately convey an emotion? At what point should a machine be permitted to redefine the trust we place in our own senses? While a hearing aid provides wonderful benefits, it also somewhat distorts our concept of auditory range. If a tree falls in the forest and we can’t hear it without a device, can we honestly say that it made a sound? Riddle that awhile.

These are weighty topics, and Suss Müsik hasn’t even mentioned yet how our studio’s Bluetooth UE ROLL speaker (ironically nicknamed “Ultimate Ears”) tends to stutter when a connected device is moved out of range. This was the basis for this week’s Junto. For this piece, two ambient fields were performed and recorded through the UE ROLL straight to disk. The recordings were then sped up to create a base rhythm. Woodwinds, strings, percussion and piano were added afterward.

The vocal is Apple’s “Samantha” VoiceOver reciting an email created by Google’s Natural Language API. The vocal was recorded twice, each through a separate Moog synth module, then patched through a glitch filter at the same rate as the Bluetooth-derived tempo.

The piece is titled Exhumanism. The Creative Commons image is of a British gutta-percha hearing aid made sometime between 1840 and 1910. Thank you to artist and collaborator H. Bean for providing the text, which appears below:

Suss Müsik’s Bluetooth speaker simply stops working when a device is moved out of range, so we worked with that. And yeah – cables over wireless any day of the week.

Beautiful origami on the table

I usually stay away from bluetooth as it’s so unreliable, but I have one speaker that happens to also be bluetooth capable, though I always plug it in…

To start with I wrote a simple chord progression on a piano synth pad. I then playedd this through my little bluetooth speaker. I started losing signal pretty much immediately because the computer couldn’t send audio fast enough. Recorded those glitches with my handheld recorder, and also experimented with decreasing buffer size and increasing distance. Fed all those recordings back into my DAW and chopped them up. Kept the most interesting and glitchy-est parts.

Then I started arranging all the pieces in time. Everything you hear is using those recordings as their source material except for the dulcimer that floats in and out. I used two instances of Glitchmachine’s Polygon plug-in to create the low beat and the organ sound. All other sounds are the result of chopping up my source audio recordings.

I like that this turned into a cool meditative track while keeping the feeling that it could drop out any second.

Wow, had an absolutely great time recording this one. Very DIY-ish overall.

I’m leaving Amsterdam soon, which is a city I’ve lived in for about 3 and 3/4 years, so I decided today to walk around my area and listen to the sounds of the city through headphones connected to my Zoom h1 microphone.
Along the way I picked up an old cassette player because I’d been wanting to record and incorporate old tapes into music and sounds. The lady in the shop had a spare tape that she used for testing out players, she sold it to me for €1. Its a collection of Dutch childrens Sinterklaas songs.

All of the sounds in the final outcome are derived from my recordings or the tape player. There are beeps from a supermarket checkout, snippets of conversation, shop radio, wind, birds, the sound of a skate park and other random stuff.

I remembered I had an old crappy bluetooth speaker that I received from my workplace a year ago. It looks like the kind of speaker that would be branded to surfers wanting to listen to some music on the beech with some beers and a BBQ as the sun sets. It’s worth about €25.
A while back I’d broken the bluetooth button, so I decided to open the encasing (not easy) and fix it. Which I did manage to do, but I broke both of the speakers in the process

Eventually I made my track and then played it through the speaker via bluetooth and output recorded on the h1. I managed to get it working by holding both the black and red cables against the solder of one of the speakers. Noticed midway through I could create additional distortion by moving the wires a bit. Silence is due to when I moved them too much

I didn’t have enough hands to experiment with moving my phone further away unfortunately.

Once everything was set up it was all recorded in one take and uploaded.

This is what I was working with: 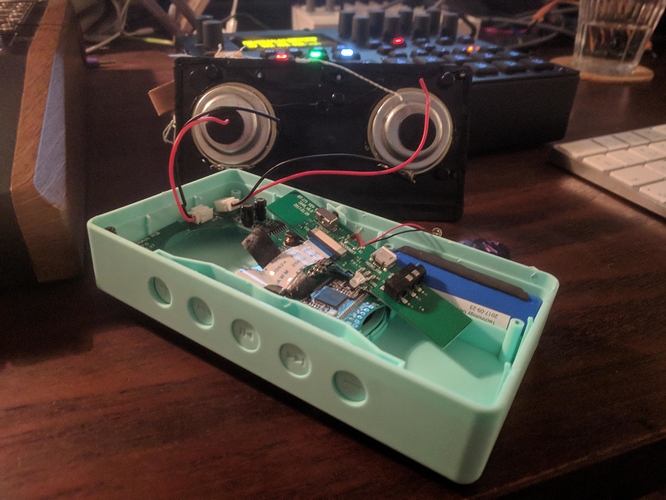 Hey, I am glad to see such cool things from everyone this week! I had fun pushing the limits of the bluetooth on my Roli, I often don’t move freely onstage with it but might now. I was able to move into a far corner of the basement. I will be ok with a few feet on stage. Thanks for posing this, I had fun trying to get the glitch spot to play in.

For this project I went with analogue signal failure, as I’ve always loved the way(s) it degrades…

Track is a field recording grabbed while driving in-between (airwaves-geographical) radio dial signals (airwaves-legal); three (+/-) stations in the mix; plus, of course, the drone of the car. The field recording heard more of what I didn’t and less of what I did, as is the case with these things, so doubled back on the track, added some phase-dropouts to one, and “telephone lines” to the other, layered them back in, and leavened with a single-tone signal in the middle.

I know that I’m slightly late this week, but I was finished well before the deadline…only my internet connection decided to play up when it came time to upload…how ironic…

It took a while but I finally found a place where I was able to jiggle my phone to create some cutting out of the Bluetooth signal. I was very pleasantly surprised with the sound of this. I recorded a lap steel loop as the track to degrade. The final track is made of four manipulated layers of the Bluetooth glitch.

This week’s assignment generated some interesting tracks. More experimental and playful. I have missed that. Thanks.