Thanks C. Reider for the great material for this remix. In this project, I wanted to create a place without clouds - the desert. To do so, I pulled samples from each of the 4 tracks on the album and used altered playback speeds and BP filters to slow things down. Assembly and mixing in Ableton Live. I think I can hear cattle astray looking for water, a mirage or two and satellites in the deep cloudless desert sky at night.

This remix somehow turned into a suspense thriller piano music score. Hope you all enjoy. This is just cut and paste with some looping in my daw, some pitching but nothing crazy.

A remix of “Cloud 1” by C. Reider. I followed my usual procedure of turning avant-garde music into groove by looking for segments of the track that could plausibly be stretched into a 4/4 loop. I made an instrument out of the opening synth sound and improvised on it over the grooves. Aside from a kick and clap, all sounds come from C. Reider’s original track.

Wow, really nice album. I’ve used a few of these browser tools before, but never got beyond idle piddling, so this is really impressive to me.

I took a few sounds from each of the tracks on the album and manipulated them in various ways in Ableton. A couple of the sounds are stretched out across the entire duration of the track to give a foundation. On top of that I use other bits and pieces almost at random to try and create a sound collage

I used a couple of the browser plugins listed to add a few of my own sounds:
whale synth and music mavericks (specifically the spoils of war and small hand instruments - I love this site!)

Its well worth looking through the document of browser synths, there’s some really neat stuff in there. Amazing to see some of these tools be used in such a creative way

Just received this set of stems from C. Reider. For folks employing them, please note that he mentioned the following: “hopefully this will be used as an additional resource rather than wholesale replacement of the album as source material.”

With thanks to C. Reider and Marc for facilitating this week’s challenge. I sampled sections of Track 1 from A Trustable Cloud, using predominantly drone-based and percussive elements. These were arranged as a series of tight loops in Ableton which I applied degrees of pitch shifting, filtering and modulation to. With the main sequence complete, I then applied some additional processing (reverb, modulated tape delay) in Logic X.

wow - this is excellent!

I did this project in Ableton Live. First, I imported all the stems. I let Ableton warp the stems without any intervention on my part. I then created four tracks, drums, bass, piano, and lead. These would more accurately be called rhythm, bass, harmony, and melody. I put each stem in whichever track I thought best described it. Some stems were rhythmic, and others melodic, but it was hard to categorize others. So some of my classifications were somewhat arbitrary. Also, I made sure each track had roughly the same number of measures by moving some clips from one track to another. This moving about of clips added a bit more arbitrariness to the categorization.

I converted each clip into a loop of length 2^n where n was the largest number so that 2^n was less than or equal to the number of measures Live had warped the clip to.

In the final mix, I let the last loop in each track continue to its end, rather than ending abruptly in the middle.

I added a little echo and reverb but did not alter any track (other than the warping done by Ableton). I used every track and did not add anything of my own.

If I had to use all of the tracks, as I did, I think I had to come up with a mechanical, deterministic process like the one I used. Otherwise, the choices I would have to make would be overwhelming. 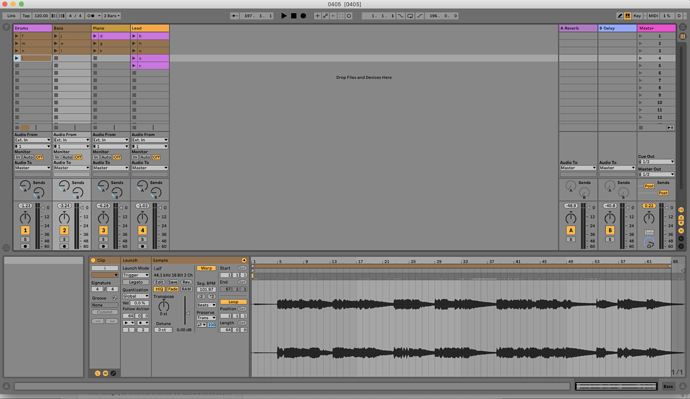 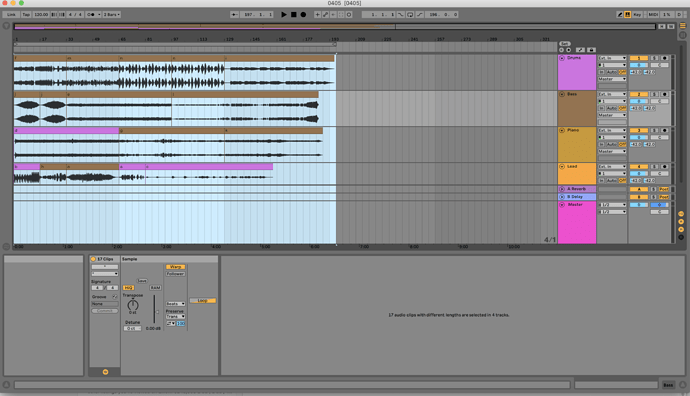 many thanks to marc and c.reider for organizing this project.

i heard something like a jazz rhythm in the opening thirty seconds of track 2. i used ableton to convert the sample to a drum beat and accompanying keyboard harmony, then played a guitar solo which i doubled up and pitch shifted. have a great weekend everyone…

I worked only with the first track from the album. In keeping with the spirit of the “free tools” theme, I decided to rework some samples from the track using Micah Frank’s free Grainstation-C software (a thread on that nifty software is here). It’s effectively a microlooper so my samples from Reider’s album (I used four in total) are very small–each only about 2 seconds–but no outside sounds are added. I did end up arranging some excerpts from the Grainstation session in a (commercial) DAW, but the only plugin or effect I used was the free version of the TDR Nova (a robust EQ plugin). Thanks to C. Reider for his generosity of spirit~

I took the opposite approach with c’s music, in that I added rhythm… he usually doesn’t do that. I took a section from the album version of Cloud #4 and added some of usual synth stuff.

I took a sample from Cloud 1 and used it for percussion, then had fun with some stabs and animoog:

I was excited to see this project pop up, this album is ripe for a full junto treatment.

I used the same procedural system for this one that I’ve used for other recent juntos. I’ve been working on another project for a while so the system itself hasn’t changed at all since the last junto I used it for. This time I just fed everything available (all the stems and all the tracks from the album) into the thing, set a seed – 56711140 arrived at by rolling my seed dice

– and asked it to generate about an hour of output. Otherwise, this is just untouched, raw output from the system.

I was interested to see – since some of the processes in the system are proportional based on the overall length, and that trickles down somewhat into other decisions as well – what a fairly long render would sound like. Before this I’ve only done renders between a few minutes and about 20 minutes in length.

Also I just wanted to hear what would happen when Chris’ album took over the system – there’s such a variety of timbre in it!

All sounds were taken from cloud 3 but some were augmented with resonators.

Sampled two segments from 2&3 and merged. Used Tardigrain and my horn. Been watching protests from XR and think it’s affected my mood tonight!

Definitely past the deadline, so no worries if this is fully disqualified.

I enjoyed the album so much and I’ve been watching from afar for many years, and since I have wanted to reengage with music, this seemed like the perfect opportunity.