just realized i made a coding error–forgot to increment j (preset changer) in the loop! adding j++; would do this.

I opted for the (maybe too obvious) Shepard scale, because I always wanted to do something with it. This track is an arrangement of different Shepard scale recordings (and a Risset glissando), arranged by hand to match my taste, with some VST fx.

The idea was to make an ambient track with only Shepard/Risset sounds but enough movement to find it interesting.

when i saw bridget riley’s “movement in squares” i thought it looked like it could be represented visually in ableton, so from this 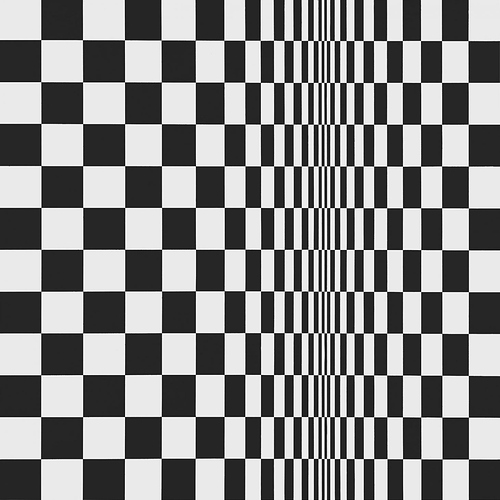 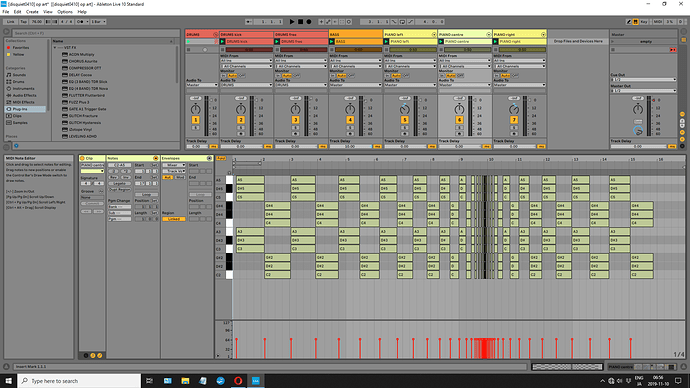 I attempted to replicate this method of creating a Shepard patch - https://www.youtube.com/watch?v=RJqtNy9yOIE - on the iOS Model 15 and a hardware Sub37. The Sub37 came out better as far as producing the Shepard tone. The Model 15 comes in first with the bass line and then the Sub37. Then I played some swingin’ tones over it. The melody is a string/cello patch I made on the minilogue.

I wanted to do this also with VCVrack, but I couldn’t find a module with an explicit ramp wave (rather than ramp as a place on a continuum)?

I really enjoyed this one.

An old friend, now gone to his reward, was a collector of 60s Op Art. Many of the pieces were mechanical with the same line art on multiple backlighted rotating disks. The disks rotated at slightly different speeds producing constantly evolving Moiré type patterns. We used to sit and watch them for hours. I tried to mimic this in audio by playing 3 copies of the same audio with rotating phase effects. The base sequence was randomly generated with the modular.

This is based almost entirely off trying to create Diana Deutsch’s Scale Illusion. The first two of the 4 voices are the Analog Bass Drum setting from plaits. Deutsch said to use a pure sine wave and as I was searching for one I liked I ended up on the Bass Drum. I thought it sounded pretty cool so I just stuck with that. The other 2 voices are using the analog waveform setting. At the end I added some delay craziness just because it was fun. I hope you enjoy.

Oh also a little bit of barbershop effect in there as I mess with the levels.

I’m implementing the Shepard tone in ChucK as an exercise. I’m an experience programmer, in general, but an inexperience programmer in ChucK. If anyone can give me suggestions that would be great. For all I know, there might be Shepard tone functionality in the ChucK library, but, if so, I don’t want to use it. At least not until I’ve understood the basics by implementing my own.

Here is the Shepard tone scale as given in Gödel, Escher, Bach, by Douglas R. Hofstadter. Can anyone tell me why there is no note for the lowest voice at the beginning of each measure? Is this a misprint or is it correct? 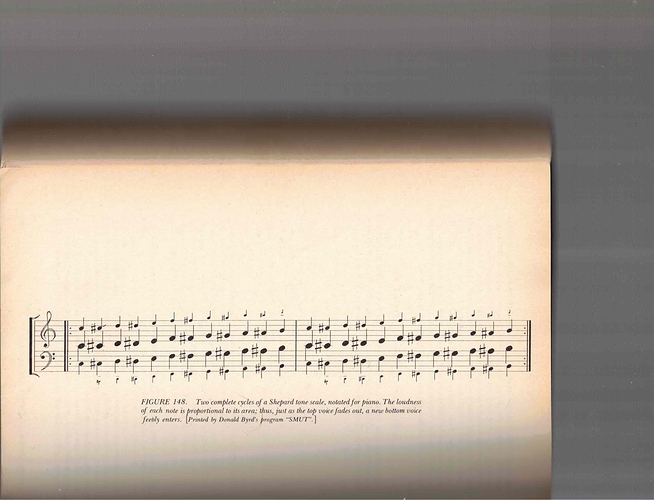 Very interesting. Given how tiny the next note up is, maybe it’s intended to signal inaudibility?

But why wouldn’t the last note in each measure of the upper voice be missing also, if that were the case?

Good point. This being 2019, I figured I’d see if Hofstadter is on Twitter, so I could ask, but he isn’t. Maybe someone else will have a good read on it.

For this one, I liked the idea, but had little idea what to do with it at the outset. So, mostly followed my instinct with this. I actually did the piece of art I used for the track first in Processing, and then from that fixated on this feeling that my vision blurred as I looked at it, and had trouble distinguishing the lines from each other. So, that gave me the inspiration to build up this noise drone, that seems to slide in and out of pitch and has these different layers that seem to peek through and disappear.

Hey this is really cool! I’m playing with it right now. It looks like it has all the elements–the volume envelope, multi voice and pitch changes etc. There is an example in the examples folder (“deep” subdirectory) which does a similar thing but with more continuous tones and a Gaussian volume envelope (I don’t know that the difference from the sin function would be audible though).

I have fooled around a lot with ChucK, worked through the textbook and took the Kadenze course, and performed and compoised with it a lot. I have to admit I’m not a disciplined coder though, so I’m not the best guy to give advice on coding per se. The only formal training I’ve had is one FORTRAN class at the US Department of Agriculture in the 1980s! (It was a good class though!)

@homeontheland, this is great - a fine analogy to the perceptual aspects Op Art in an auditory sense.

I remember a similar exercise from my first or second year of Music Technology at the University of Adelaide, where our lecturer conducted a similar exercise. We weren’t told what was going to happen and he simply checked in with us beforehand to make sure we were feeling alright. He then shut the curtains to our large studio space and started the playback of a loop of him saying ‘experiment’ infinitum for the 15-20 minutes. Afterwards we were then asked to write down what we heard on a whiteboard. All kinds of things came about: ‘eggsperm’, ‘errumdrum’, ‘humdrum’, excrement’, etc.

I remember the process and outcome had a huge impression on me - it was definitely one of those inspiring WTF moments of my Uni days that would go on to influence my practice.

So this is a rather formal and sterile offering demonstrating the Glissandro Illusion. I set up all the parameters as described in the article and tried to created an oboe from a square wave with a pulse width of ~86%. And adjust various parameters to demonstrate how the effect changes when the panning freq. is varied, the freq. of the lfo on the glissandro and by reducing the synths in the mix

It turns out I still didn’t learn much about Max because I used a lot of the built in BEAP modules. And I couldn’t figure out how to hook up the UI nicely with Ableton - so I haven’t shared the patch here.

Thanks! At least I’m on the right track. After I’ve taken it as far as I can go, I’ll ‘peek’ at the ‘answer’ in the examples folder. I figured that somebody somewhere had already done this in Chuck.