I am feeling very thankful to @scanner_darkly for his amazing Orca’s Heart multipass algorithmic sequencer, which is brilliantly musical and a pleasure to use via grid as the interface. Here I have flashed my Teletype to be used as Orca’s Heart, and am sequencing Just Friends (via i2c), Rings, Plaits and Telharmonic into Clouds and then Ableton. I ended up releasing an EP this week, using Orca’s Heart exclusively. So, thanks again @scanner_darkly!

Making music, making sound for me is deeply connected to a feeling of gratitude. And I really feel thankful for quite a few instruments that are in my custody.
This time, I send a thankful thought to my bassplayer-friend H for hunting down my 82ish Fender JV-Squire Precision Bass. He even drove down, inspected it, tried it and bought it for me. It’s a great, beautiful instrument. Resonant with deep rich bass that just feels right.

For this song (I’m cheating, it was half-prepared and almost ready to go) I started out improvising a few loops on the bass. I programmed some drums and recorded guitars. I can’t really play keys but I generated some loops by having the Max4Live instrument Melodics Step play rhodes. I chose the best bits.

My friend could probably have laid down the parts a lot better. But I’m thankful for having an instrument that inspires me.

hello everyone,
i’ve written a song to my most cherished musical instrument, my hands.
without them, i wouldn’t be able to try to play guitar.
i made a drum beat using processed samples of my hands thudding, clapping and clicking.
i duplicated the beat and used it to feed two separate resonators into two separate distortion VSTs (panned across the left and right channels).
then i played guitar.
it suddenly got cold in Tokyo and, playing at 5 a.m., my hands were frozen and not very responsive.
but i’m leaving the track in its out of time, out of tune, out of sorts state.
let it be a crooked love letter to my hands, who rarely do exactly what i want them to do…

Thanks again Marc for an interesting prompt. Following last week’s tumult, I thought I’d aim for something a little more gentle; albeit with slight uneasiness permeating the mood.

A tool that I’ve used consistently for the past few years in an Electroharmonix Pog 2 Polyphonic Octave Generator. I’ve used it primarily with an electric guitar and it renders some beautifully rich timbres which sound akin to a detuned organ mingling with a heavily compressed 12-string guitar. I employed it five years ago for a track called ‘Red Eyes’, where I used the Pog 2 in a signal chain with a EHX Memory Man and simple tremolo. It remains one of my favourite ambient/sombre guitar things I’ve done (Red_robin – Red-eyes). 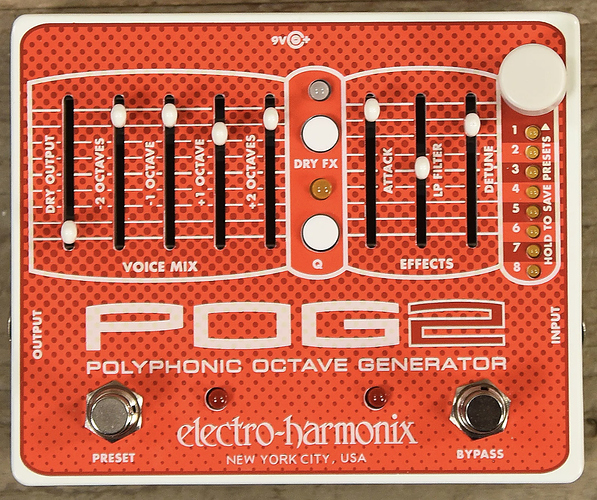 I thought I’d revisit that setup and do something similar in honour of the Pog 2. To make things a little more skittery and uneasy, once I’d layered some takes in Logic X, I used Logic’s AI drummer and created two opposing drum patterns in 7/8 with varying degrees of swing. So, it’s less a rhythm per se, and more of a distant texture which underscores the layers of guitar.

I am thankful that I was finally able to buy a double bass - I waited about 15yrs - and then about 6 months ago a friend called me and asked if I was interested in buying his old one (which I’d played many times) because he was upgrading to a new one.
I’ve played electric since I was a teenager and always dreamed of having a double bass.
My friend sold it to me for much less than it is worth.
So now one sits in my music room,
for me and my family and friends to play anytime.
This is my first recording on double bass.

What a lovely idea. I thought about this a lot, and there’s a lot I am thankful for, including gear. I love my piano, my guitars, my various MPE controllers and soft synths and DAWs. My collaborators too! But so much of my last year of music has involved DSP, soft synths, open source, and the like. So I realized the bit of equipment I am most thankful for is the c++ 14 standard compiler.

With that idea in mind I set myself a challenge. Can I take a theme I wrote in 2013 and render it using a soft synth that I code entirely from scratch, entirely from first principles, in C++. I allowed myself only one external library (I used libsndfile rather than writing a wav writer by hand), and I went and looked up the LPF Biquad coefficients rather than figuring them out, but the rest of it was from scratch.

That’s a dumb thing to do, and the code is silly, and doesn’t sound very good, but it was fun, and it made a bit of music I’m not ashamed to share. Of course, I have until Monday night to keep working on this, but then I will do too much, so I’ll force myself to stop now and share the music and the code.

Me thinking about disquiet0413. Contribute to baconpaul/disquiet0413 development by creating an account on GitHub.

I chose the Makenoise Morphagene as my tool to be thankful for. It’s my favorite module, but more importantly it, and its predecessor the Phonogene, introduced me to things like concrete music, tape music, microsound and the legacy of the SF tape center. Those ideas pushed and influenced my interests for years. So, thanks Makenoise…both for great modules, but also great manuals and sharing your influences. You were my gateway to bigger ideas.

The process for this video is a sample of how I spend most every Saturday morning. It’s a direct to disk recording of a Morphagene reel I made of OP-1 bits (sidenote: OP-1 could have easily been the tool I’m most thankful for.). After I’d built up some splices I liked, I hooked up the Vidiot, started a VHS tape I’ve been using as a scratch recording tape and hit record. This is a direct recording with no editing.

I decided to be thankful to MakeNoise for the 0-coast.
It’s far from my most used synth and in fact I’m always kicking myself for not using it more - most of the time when I’m composing music I don’t have the patience (/knowledge) to patch it up how I want.
But as a tool to create some wild sounds and to break out of this preset mentality its great and really has taught me to approach sound making from a different perspective.

I recorded 4 different tracks with no prior planning. And between each track I removed all the cables and started a completely fresh patch.
I’ve been trying to make dark, 130+ bpm techno focused in the loooooow frequencies recently - with more attention paid to subtle modulation. So, as an antidote to that I wanted to give more space to mid/high frequencies here with a good portion of the recording time spent twiddling knobs.
Though - I still couldn’t resist adding a lower bass sound and some percussive sounds.

I did a bit of final tweaking + reverb / delay, EQ etc in Ableton at the very end

Produced in a dark mood. ARQ heals. A bit. Thank you Zoom.
Love that machine. A very responsive creativity tool.
Track entirely made with Zoom ARQ 96. Some samples recorded from 856 for Zellersasn. Lots of sample modification and detuning… Easy on the ARQ. Unfortunaltely no modulation of start and end points. Lots of sound modification especially in the second part. Lots of dark dirt added.
Enjoy.

I use Ableton Live Lite a fair bit as a kind of Swiss army knife. Serum’s a remarkable synth and Valahalla makes several go-to tools I use. Also, thankful for 19-tone .tun files…

I’m particularly grateful for Ableton Live, a program I use pretty much every day. I’m also thankful for the plugin and instrument writers. In this case, on Friday, I bought a new Ableton pack of dystopian synth sounds and happened to watch an interview with Gary Numan, which was enough to inspire me to make this track.

I’d also like to add an extra round of gratefulness for this and the other communities online inspiring me to work on acquiring and improving my skills.

I’m thankful for electricity … the buzz from my electric toothbrush charger reminded me, so i stretched a recording of the 50Hz buzz and painted with the results:

Have a great week!

Hey,
I though I was out for this week’s challenge for professional reasons, but I finished this track that I started a week ago, it is a highlight to my two electric guitars, so I’ll thank those two companions I’m extremely thankful.

But I decided to share the track here to thank @disquiet Marc and everybody in this joint, I made some great musical friends and like-mind collaborators and I’m really grateful that you guys have time to stick around.

I started the track on my Stratocaster over a drum beat, then added my upright bass (another tool I can’t thank enough) and then decided that the guitar sound wasn’t making it, I added a new track of electric guitar but this time on my Epiphone “jazz” guitar (in the end I kept some of both) , it wasn’t making it so i added my piano, recorded proper drums, and added final touches with vibes and organ. Eventually an unexpected Latin flavour popped up and added some slight percussion (cowbell).
It was a week long process but it was rewarding in the sense that the final result is far from where I started and planned to go.
Thanks once more people, love
DD

The Caustic App for Android and iOS (Mac, Windows) is a mobile DAW with a handful of included synths. Although I have much better instruments, virtual and real, I still use it very often, mainly because of its UI (which, compared to fx Korg Gadgets and its better sounding synths, is so much simpler to use). It allows me fast prototyping of something I want to hear. I mainly use the simple sampler, which can be fed with shitty WAVs and old .SF2 soundfonds, and the pseudo modular synth (with it’s limits, compared to VCV and these things) plus the FM synth. Many times this was all I needed to combine strange noises and harmonic sequences or, like here, pads.

This simple App brought back so much musical fun to me after selling all my hardware synths some years ago, that I am really grateful. This track was quickly screwed together with some SF2s and the FM Synth.

iris 2 is my go to software at the mo. i like working with samples and quickly making them sound unrecognisable. can work pretty much in box, lots of fx that can be controlled by lfos/adsr

image from the film Only Yesterday

Hi, this is my small contribution made with Automatonism:

It is a chance to say thanks to Johan Eriksson, the creator of Automatonism. For me it was the entry point to begin exploring modular synthesis and electronic music in general. Still learning.

Thanks Marc for providing the context for experimentation and creativity!

I am thankful for arpeggiators. This four-track piece is comprised of drums, pad, Logic’s Bell Echo synth, and grand piano with Arp plugin.