Although it was immediately inspiring, this ended up being a difficult one to tame. Anyway, I took the image from wikipedia, posterized it and reduced it to a very small resolution, turned it into ASCII. Then I had some code interpret it and try to turn it into midi. Next, pulled everything into Ableton, made 3 different versions of the midi at different resolutions, with a different bell sound for each variation. Finally some drums and sprinkling of synth.

I had the feeling crop circles must have an iterative, drop-like structure. No VCO should be involved, because who knows, if the crop circles are ‘made’ or just ‘spontaneous phaenomena’ …

Two different soundscapes from the Koma FX were used in Reaper, both created by self-oscillation of the digital delay with no input. Plus some FX, modular and VST. Deep low frequency bassdrum via contact mic. You may hear the approaching UFO checking the mysteriousness of the crop circles …

I went really basic with this one using the generative sequencer app NodeBeat to create a session to approximate the crop circle pattern.

Sure, math-aliens would be the ones that actually make it here and manage to communicate. But my aliens are Happy Accident aliens, they’re just goofing around and tagging some planets before Galactic Security can catch them.

I interpreted this crop circle clockwise, with the central curves indicating volume and the outer circles being pitch and twirls, all underscored with the sound of its own making: plant stalks being flattened down in steps. Thanks to Vijay Balakrishnan and Jimmy Kipple Sound for aliens and environments.

This was another case where PhotoSounder was used to turn an image I made based on the Wikipedia image accompanying the assignment. I tried various duplications and scalings of the image but concentrated in the low-mid to mid-high frequency range for the PhotoSounder processing.

There’s some reverb and distortion added and a bit of filter sweeping to keep things from being too sterile.

I looked at the crop circle image and detuned an instrumenting what seemed like a fitting pattern for the top six crop circles. It was a really strange tuning that limited what I could add since normal instruments wouldn’t fit alongside these. Due to that constraint, it would up with a lot of shakers and strings and slides. It’s some sort of a bluesy field stomp.

I decided to use the image of crop circles provided as the directions for manipulating the Virtual ANS instrument. The picture was reduced to black and white only, then imported into Virtual ANS (which applies its own colour scheme…). As the process was essentially visual, it seemed appropriate to capture the recording to video rather than audio only.

The sound-generating scan was allowed to touch each edge of the circles as it moved from left to right, then reversed to the previous edge on the route, ping-ponged onwards until the right-hand side of the screen was reached; then the process was taken from right to left again for the final sweep.

No post-processing, just the addition of titles followed by rendering to MP4 for the upload to YouTube.

Greetings! First time here, and contributing to the junto - been messing around with pure data passed few winters and kind of got lost in fiddles - so when I came across the junto thought it would be good to give me some structure and force me into trying to finish/share the odd thing… anyways I look forward to being a part of it when I find the time, 'tis a lovely idea, and in general makes me happy to find creative things like this going on. Cheers!

So I noticed the crop circles encode the fibonacci sequence - trying to count the centre ones I was like, 2/3/5? 8? then when I saw 13 around the outside it clicked

So i just went fractal fibonacci nuts everywhere else - built a drone from sine waves (circles!) mix of fm & additive, and used the ratios 2/1 3/2 5/3 8/5 - 5/3 & 8/5 are basically major & minor sixth apparently - and sounded lovely to me… so the drone is assigned to a midi knob which can play around the scale, plus distortion/volume etc.

Then I plugged in volca keys and did euclidean arpreggio based on 8/5 - had derived fundamental frequency of pretty much D3 by dividing first 6 fibo-ns by 7th - so used that plus aforementioned ratios/intervals to feed the keys.

Took 3 mins of a field recording of wind blowing in reeds to add some atmosphere, a bird sings at the end so took that as my prompt to stop fiddling and… waddjamacallit - when the ship goes zipping back off to alpha centuri?

So those 3 elements all go thru a fibonacci based reverb i made in pure data, which has a kind of tape effect when changing speeds… and i recorded 13 takes, and ended up using mostly 2, with the start from 10 and end of 13.

Et voila. Sorry for the waffle, don’t know if clear as been tiring day - but really a pleasure to take part in this - will return to listen to more of you alls experi mental materials toot sweet, after sleep…

peace. hello. goodbye. until next time. thanks. ok. yes. nice. ok then bye.

ive got an app on an old tablet that i couldve arranged circles to make music cant remember what its called
didnt get round to doing that but i was making another track and afterwards it occurred to me that i was trying to replicate the sound i was hoping to get… so… that counts right?

Not much, but I wanted to do something. Ripples, dripping, the visual for the Op-1 delay effect. I recorded a simple four note melody, used varispeed of the OP-1 to layer the melody in different octaves/speeds.

(at least it made me fool around a bit)

Rather quick interpretation of the conceptual side of this idea. I just went with it and started layering tracks. Possibly a bit much at points, but I wanted to convey both the pure conceptual eeriness of such a mysterious form of possible communication and the visual symmetry involved.

I used a field recording I made of walking through grass at night. I was outside the Four County Players theater where my daughters were rehearsing a musical play they were in. It was dark and cold. The theater is in Barboursville, Virginia, a very small town. I was walking through a baseball field, unused in the winter.

Am I cheating by using field recordings?

Recorded on my Tascam, edited in Audition. I doubled the track and added noice reduction to make the altered bits. Thanks!

@DetritusTabuIII - I like the choices of instruments here. There was a lot going on but it felt coherent. I also enjoyed the way it balanced a feeling of direction and randomness: nice work!

@euclidian - I enjoyed the melodic elements here. Those few augmented 2nds and the back and forth interplay sounds very interesting; I also like the sounds you used.

@SussMusik - I liked how slow the movement in this was, and the reverse/time stretch sounds. It also has something like vinyl crackle which I thought was a nice touch.

@Pineyb - I feel like your approach was similar to mine and it really worked for you. I can very much hear the connection to the image.

@samarobryn - I enjoy the way this, intellectually, feels like it hit the brief exactly, but also seemed different. It appears familiar and ‘obvious’ (in retrospect) but also unexpected, which is a combination I appreciate very much.

I went with a more conceptual approach to circles and decided this would be a great chance to use “mirror harmony” (or “negative harmony”).

Each melody segment in the right-hand ends on the same note it began on (to follow the rise and fall of a circle), and the left hand mirrors the right hand with the same intervals but in the opposite direction (making the bottom half of the circle).

After a while I realized having them begin and end on the same note got a bit stale, so I decided to explore having them start a half-step apart or a whole-step. This led to coming up with a system/process of determining starting intervals, in which I mapped on a clock face the starting intervals of the first three melodic segments, then used to that to invent a system to determine the other starting pitches. I was pleased to see that (accidentally) the distance between melody and harmony steadily increased over the 12 melodic segments, which further reinforced the clock-face/circle metaphor.

I added some static in the background, with certain frequencies cut out to let the melody through. The static also has phaser, flanger, and chorus on it, to further reinforced the circularness of the piece.

The name comes from the idea of crop circles being a tourist draw, perhaps left by interstellar visitors, and idea of a maze/labyrinth being the holding cell for the minotaur.

And here two pictures of my scribblings and sketches, if this is of interest to anyone! 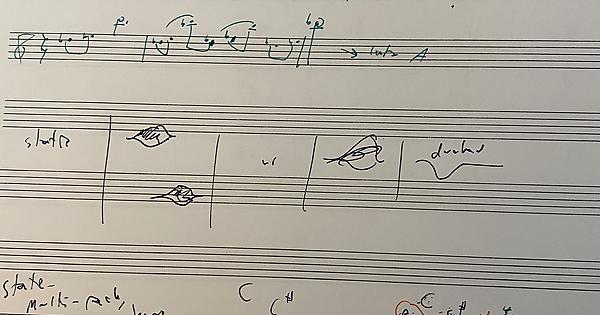