I’ve been reading about Alvin Lucier and had already bought a cheap SDR because of his interest in radio so this seemed the direction to take.

The piece when I played it turned into being a drone

and you can see me play it here 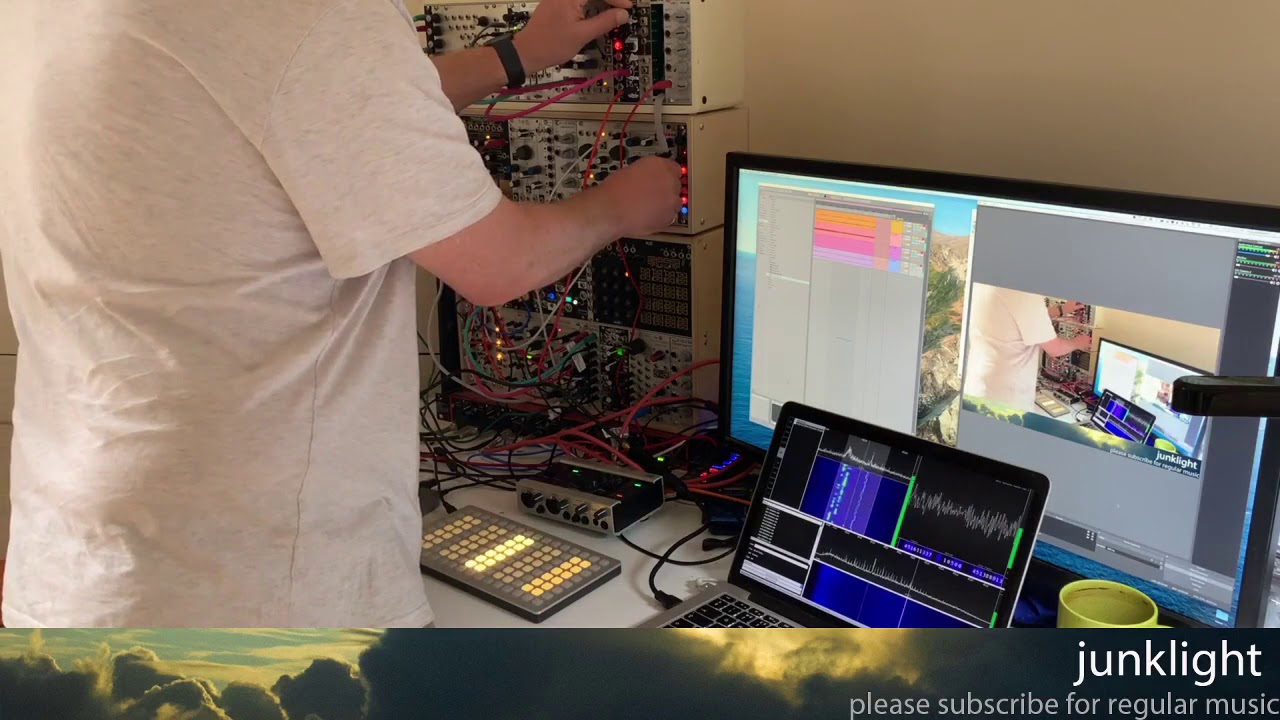 My initial idea for the A440 Junto project was different but the more I studied Wendy Carlos’ scales, the more I was sure I would go and do something based on one of those. I used Pianoteq’s fantastic scale editor to use the Gamma scale which produces nearly perfect triads.

From there, I made a lullaby in three quarters featuring the low-error major thirds and perfect fifths. It was like learning an entire new instrument since the octave is 20 keys now. It’s not a very practical tuning, in fact Wendy hasn’t used it on “Beauty in the Beast” either. Regardless, I hope I was able to show that it can be used to achieve rather pleasant melodies.

Unlike my other Junto submissions, this one is a YouTube video so you can see the atypical key combinations I had to use to achieve the consonants: 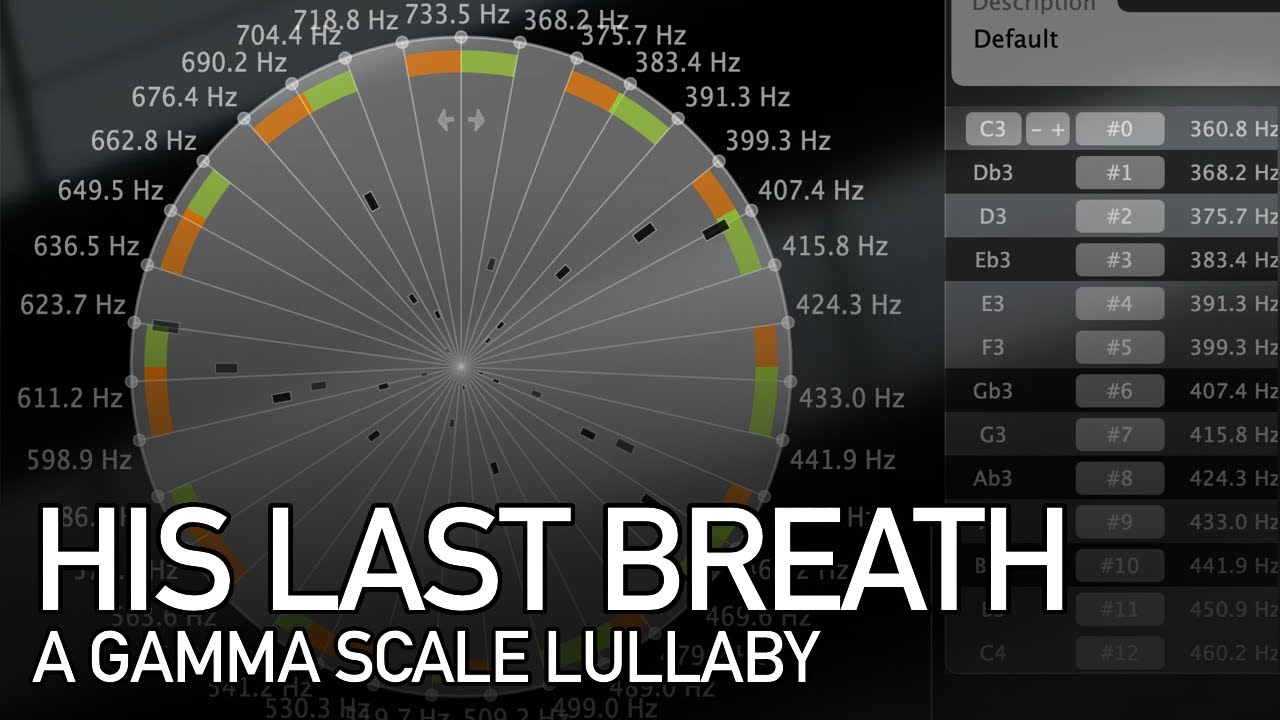 The composition took a long while to figure out but it was recorded in one take. I added a Spectravox drone (with two Dixie sines as sub-oscillators) and a subtle Subharmonicon for some movement. Raum reverb. That’s pretty much it.

This Disquiet Junto project was about subverting standard tuning practices, and I found multiple ways to do this. I recently bought a Deepmind 6 and I wanted to use it but it does not support microtonal scales. To get around that I used slow random lfo’s to manipulate the pitch from -100 cents to +100. Also, I used unison detune and the maximum amount of oscillator drift. There was also a pitch harmonizer effect in a feedback loop, which I made sure was off by an unnatural number of cents. This ended up becoming the drone part.

The only soft synth I have with alternate tuning support is a Rhodes simulation, so I used what it lists as 7t Equal Temperment because I liked the dissonant sound. Finally, for the bass I turned the keyboard tracking way down and used a random lfo to manipulate the pitch. Good times.

I love this, beautiful!

In the Disquiet Slack @lettersonsounds shared a tuning used by Terry Riley on his album Shri Camel. I took that and used Bitwig’s built in micro-pitch devices to tune some synths and a flute sample to that. I ended up saturating the flute sample, because it sounded a bit silly just playing it like a character-less mellotron, and it came out something more like a dramatic synth lead. I half love it, half hate it.

The very opening notes are applying modulation sources to the pitches of the bass synth, and gradually reducing that modulation, like a very conservative version of the famous THX sound.

To my shoddy ears the alternate tuning is pretty subtle! It was fun, regardless.

What a lovely bit of music.

And totally these extended scales are new instruments. I ended up having to print out the ‘score’ (the actual keys pressed) for my pad sound and notate the keys to play the on the piano in my bit. Like “Oh the keys for the most in tune triad above this c3 and b3 natural are g4, eflat5 and a5” (or whatever), even though those obviously have a very different harmonic meaning. Then I wrote it on a score as notes and sight read it back once I had “solved”.

Similarly in dq423 I used ED2-18 precisely because I could play diminished triads and get wholetone scales.

I do wonder if more experienced microtonal keyboardists with long scales have techniques they use to make the instrument ‘relearn’ more tractable in non-period-12 tunings. Curious if there’s any tips.

And again, lovely bit of music. Thanks for posting it!

As Ableton is my current main piece of software I use, alternate tunings are a bit of a challenge, unless implemented via some plugin. Gladly used the “tuning workbench” to get a close to 432 tuning (just slightly off) and played with some chords, resonant filters and a bit of reverb, slightly gated.

That’s my favorite track here so far! Always love it when people put in the hours to make a complete arrangement. This is very well done and the Shri Camel tuning clearly works.

The flute you hate/love is wonderful, reminds me of the classic early '80s Vangelis sound.

Why not forget tuning at all? The crazy GleetchDrone software seemed like a handy tool for this, because it’s oscillators can be detuned on many levels. I started with all 8 oscillators droning … and ended with a reduced set of separately recorded 4tracks, 1osc each, mixing them manually.

The result was intended to maintain a certain balance between (a)tonality, mood and dramaturgy.

This piece started with a bank of 8 delayed sine waves generated in Max, sweeping down from 449 Hz to 431 Hz. These sounds were then assembled in Pro Tools, and some were pitch shifted down by octaves. Added some more delays and some shimmer, thanks to Valhalla.

All this is in honor of the 440th weekiversary of Disquiet Junto. Thanks, @disquiet!

I can’t resist a chance to make and listen to more music outside of our dear 12edo.
I went with one of my golden ratio tunings, where I keep dividing the golden ratio into smaller golden sections. It sounds awful with harmonic sounds due to its irrational nature, but with golden-ratio-based timbres it becomes quite lovely.
No octaves or harmonic intervals any kind here; everything is the golden ratio to some power.

The reference frequency is 419.8hz, but I don’t think that shows up in the actual implementation of the scale. It’s an arbitrary number anyway. Often I can’t be bothered to change it because keeping C4=261.625565hz makes tuning other sounds easier.

I ruined it with some repetitive drums, because I thought it needed more motion.

The flute you hate/love is wonderful, reminds me of the classic early '80s Vangelis sound.

Thanks! It’s precisely those connotations I was thinking about. Some part of me finds it really dated / cliched, but I do also feel its effect!

Well, analog synths have been dated since the DX7 came out and most people would say that the typical DX7 sounds feel more dated to them

Analog is true vintage now. Vangelis was overused in the '90ties so I know what you mean but truth be told he was a pioneer and a generation of musicians, myself included, grew on his unmistakeable works.

I wrangled my modular synth to play microtones, but not according to any specific scale. Each of the 4 pitched voices in this track are playing microtonal pitches. Some pitches are played by a 12-tone quantized sequence sent through an attenuverter to alter the tuning. Other pitches are played by a Teletype script, using precise microtonal voltages calculated by a spreadsheet. Percussion is performed by an Ableton Live sequence in the traditional manner.

The overall mood of the piece with its wonky time signature and gliding synth lead makes me think it could be the soundtrack of a cheesy low budget sci-fi film.

All in all it required a lot of complexity for not a lot of music, but it got me to use my Teletype again!

Cover art is derived from a CC-BY-SA image at animalcrossing.fandom.com/wiki/Tuna

Disquiet Junto Project 0440: Tuning In
The Assignment: Dismantle the institution known as A440.
There is just one step: Throw off the shackles of A440 and make a piece of music in your favorite alternate tuning.

Chose to do this, because of the utter tripe out there re. 440Hz.
Synths used: Reason Studios Complex-1, AAS Chromaphone, String Studio, Ultra Analog, KV331 Synthmaster. All but the first support Scala microtonal scales.
I haven’t done a Junto in a long while, been a busy 12+ months, hopefully am back in the swing of things again. Indeed, I “missed a day” this weekend - true to the Junto, I consider this unfinished…

I’ve just been working on a track with a trombone part in it and I got the impression they’re not normally played in an equal temperament scale? Is that right? If I put a tuner on the trombone parts they often come slightly under or over the “normal” notes…

i like the idea of a relative scale that doesnt have fixed frequencies.
for this track B is set 1% lower and then the track gradually, hopefully imperceptibly, drops 7% by the end

Here’s a thing. Didn’t really turn out how I wanted, but that’s ok. Starts out with a timestretched sample of an orchestra tuning up, then turns into a weird beat in 25/16 using a gamelan scale from kaivo.