Using an audio sample of Tools taken by Tobias Reber at Carlo Bernasconi I have created a series of textures that come ONLY from the sample itself - there is no additional sound involved. Like the stone mason using their tools, I took this single sample and through granular synthesis, smashed, recombined, elongated, truncated, and morphed every particle to arrive at this work. There is no doubt that it could be done again in a completely different way - just as a block of stone can be shaped in an infinite variety of ways. This project celebrates the 2020 Musikfestival Bern as a part of Marc Weidenbaum’s Disquiet Junto project 450.

The samples asked for one iPad app which I like a lot but haven’t used for quite a lot time: Borderlands Granular.
I chose some of the samples (11 to be exact) which appealed the most to me and did some layout with similar sounds in rows. Then I started to experiment with the sounds. Some automation was used during recording in Borderlands and later I activated the gyroscope mode to get some movement. To the end the numbr of grains This was the third or fourth take and it was later mastered in Ableton Live.

The sounds of machines, tools, and voices are central to this project. Without them the ambient field recordings would be nearly silent and stones would make no sounds. They are material waiting to be picked up.

The tool shapes the material, it influences what you make. This week I opted to leave my large DAW-centered setup alone and work with the Polyend Tracker, paired with a single hardware synthesizer, the Circuit Mono Station.

The Tracker puts plenty of limitations on the creator. It only supports monophonic samples. It can play up to 8 of them at a time (you can pan them in the stereo field). It only allows for around 90 seconds of recorded audio per track. And it only has two sends: a stereo delay, and a reverb. There’s plenty of tracker-style automation available but it only allows two commands per note at a time.

In return, the Tracker provides a uniquely ergonomic and focused workflow. Its limits become a creative choice. The tool shapes the material. In fact, it even came up with the title for the piece. I recorded a video of the Tracker performing the piece so you can get a feeling of what it’s like: 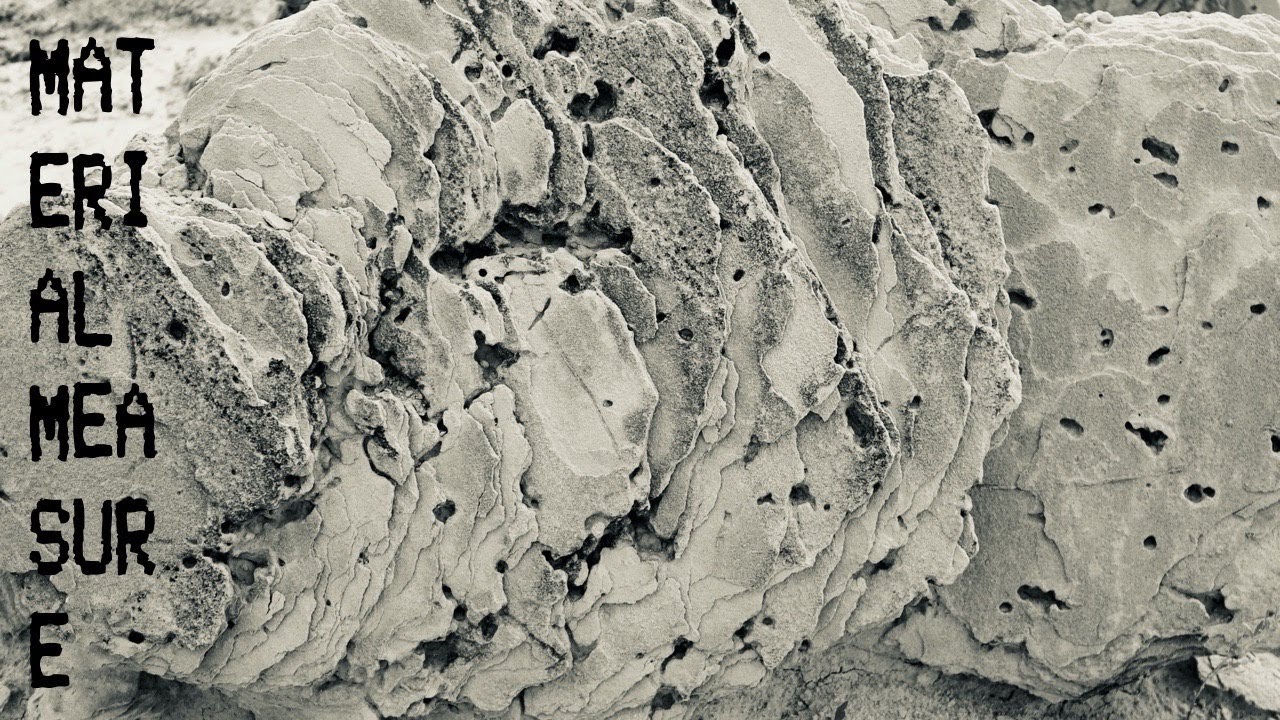 The track’s only tonal instrument is the Mono Station which I decided to treat as another machine-like tool with limited melodic freedom. There’s a single non-field recording sample here: a classic jungle drum beat which anchors the center of the piece. In any case, there’s no clear verse-chorus structure, there’s no decisive bass drop here. Instead, there’s heavy texture, immersed in the Bernasconi ambience. But the ambience is processed, detuned, sometimes reversed, placed in non-obvious ways in the stereo spectrum.

If you’re so inclined, here’s the SoundCloud version. It’s the same audio as the video but uploaded as lossless FLAC, hopefully better quality overall.

For those of you with a Tracker, here’s a zipped-up Tracker project: material_measure_tracker_project.zip

Using delay as an instrument? That takes me to outer space!

This feels like they’re mining for spice on Arrakis.

Those reversed tones add a lot of harmonic interest and I like how the rhythm picks up pace.

Great use of stereo to create an immersive environment.

That horror movie vibe is awesome. I’d like to see a screenshot of your effects chains.

Love these melodies. Quite a reverie.

Gives me a paranoid vibe after that crescendo opening.

My basic process was to listen to all the samples and pick one from each “group”. I extracted looping sections from each sample and filtered them to bring out just the textural aspect I was most interested in. I divided then into ambient elements and rhythmic elements and arranged my sample loops out. The intent was to form two sections but they aren’t as distinct as I’d intended them to be.

This was done on the MPC with my usual effects. The only sounds used were my chosen loops from my chosen samples. The loops with rhythmic elements weren’t broken into beats but rather left as is to retain their inherent rhythm.

Overall the sounds worked nicely and I feel like there were a few interesting moments but I didn’t get enough movement and variation to get the best out of the material. Despite that, the end result has a fairly pleasant feel to it. Thanks for another fun Junto!

Considering I did an entire soundtrack to Dune, the novel, last year, that comment is even more appropriate than you realize!

Wow, so many great sounds in the download. Had trouble narrowing it down, so I ended up using almost all of them in some form. EQ-ed them and added bits of reverb and compression to meld them together. Combined a few into some rythm pattern, then used resonant filters to sketch out some chords and added just a tiny bit of synth arpeggios.

They are not that crazy…
This is the main ‘harmonic-texture’:

Thanks for this. Yeah, not too crazy and I guess it’s a bit like a horror movie in seeming more threatening when unseen!

looped just a couple small machine sections that made my ears twitch. pitched down in pinches to create some glitch. plunked in an old voice memo on top of the viscosity.

I used granular and wavetable synths to make a bed of sounds, and then created patches increased density. The idea was to create the sense of the rhythm developing organically out of the background.

Not really an inspired effort, a bit rushed but still fun. I looped one of the ambient tracks and put it through a lot of reverb, Abstract Chamber and made a background. Then used the Tool tracks to make a single wav file and subjected that to various indignities using ambient v.3. This was cut up and remixed over the backing and… a sound sculpture, I guess.

Looking through the source files I instantly locked on to a rhythmic loop and begun building on it and tweaking and layering ambience.

Fellow Junto Participant @Kiggler joined me on Discord to suggest rearrangements and changes that dramatically improved the flow of the track.

All sounds are from the provided source audio (except for the kick drum).

This is a sort of procedural noisy drone thing done in Pure Data.

My process was to listen to all of the files and then just sort of play around with them in PD until I found some sounds I liked. I ended up with 6 different voices using 5 of the provided samples as audio/data sources.

Voice 1
tools02.wav is run through a lo fi granular timestretcher. The grain reader (not sure what to call the fast phasor) is poorly locked to a static frequency via a phase locked loop. The reader’s own frequency as well as various PLL parameters are modulated by “probabalistic” gates with the probability increasing as the piece proceeds. The gates are actually deterministic because instead of using some random value, they are taking samples from a slowly traversed tools02.wav. The audio file is essentially acting as the “score” for its own modulations.

Voice 2
machine02.wav is run through a lo fi timestretcher and filtered.

Voice 3
ambience03.wav is set up in a similar configuration to tools02.wav with a timestrecher and a PLL but without the modulating gates.

Voice 4
work02.wav is run through a timestretcher. It is slowed and pitched down to a sort of low rumble which is then filtered a bit.

Voice 5
work02.wav is run through another timestretcher. This one is connected to another PLL and used for some noisy “pitched” stuff near the end.

Voice 6
tools01.wav is pitched up and used as sample data for a synchronous granular synth. The frequency of the synth is controlled by an envelope follower which is being driven by a slowly traversed tools01.wav. This is another voice whose sound source is also its “score”.

Here is the patch if anybody is interested : https://drive.google.com/file/d/1xYd9F-Ljp8oL7VRVK9Sv4LBD5YBPbRJT/view?usp=sharing

If you want to run it you will need to add the audio files to the /audio directory for things to work. (windows users might also need to change some file paths to have "/"s instead of "\"s in the patch itself)

Gestreckte Naturstein (or Stretched Natural Stone) is a play with some of the more mobile sounds from the nicely recorded and very varied sounds from the stone factory, for which I thank @TobiasReber. All of the sounds in the piece are from this collection. There has been a lot of stretching using elastic audio in Pro Tools. It’s a five minute composition that was pieced together very quickly and intuitively, responding to the sounds and textures of the different recordings. There is a little delay on a few sounds, and a little (almost unnoticeable) reverb on a few others. Mostly it’s a musique concrete assemblage of sounds, which I enjoyed making. 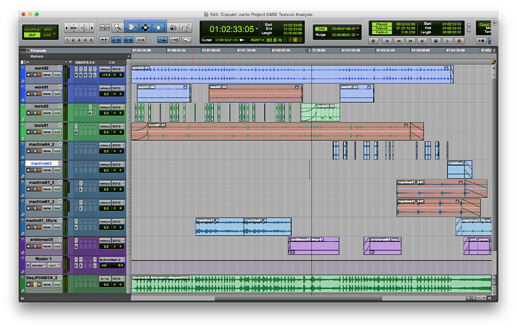 Heh, I’d forgotten about that one.

Here I took the first three ambience tracks, the first machine track and the second work track and passed them through a Eurorack waveshaper, ladder filter and wasp filter then through a ring modulator before combining with the original tracks in Ableton. I then automated a Sinevibes Robotizer, Sinevibes Stream delay sequencer, Eventide Shimmerverb and finally an AudioThing Filterjam.

I wanted to get the sound of the force of rock being shaped. Possibly stretching to call it music