Thanks! I couldn’t decide on a sandwich for this one.

This includes field recordings made on a pre-booked before pandemic and socially distanced brief holiday. Processed field recordings. Contact mic. Vst’s. There’s also more than one of the same clip on a different track to overlap the sounds.

My tip is collect field recordings whenever possible and build a sound library. I try to record something every session in the studio.
Build or buy a contact mic. I’m sure this isn’t anything new to most here. Anyway hope your all ok 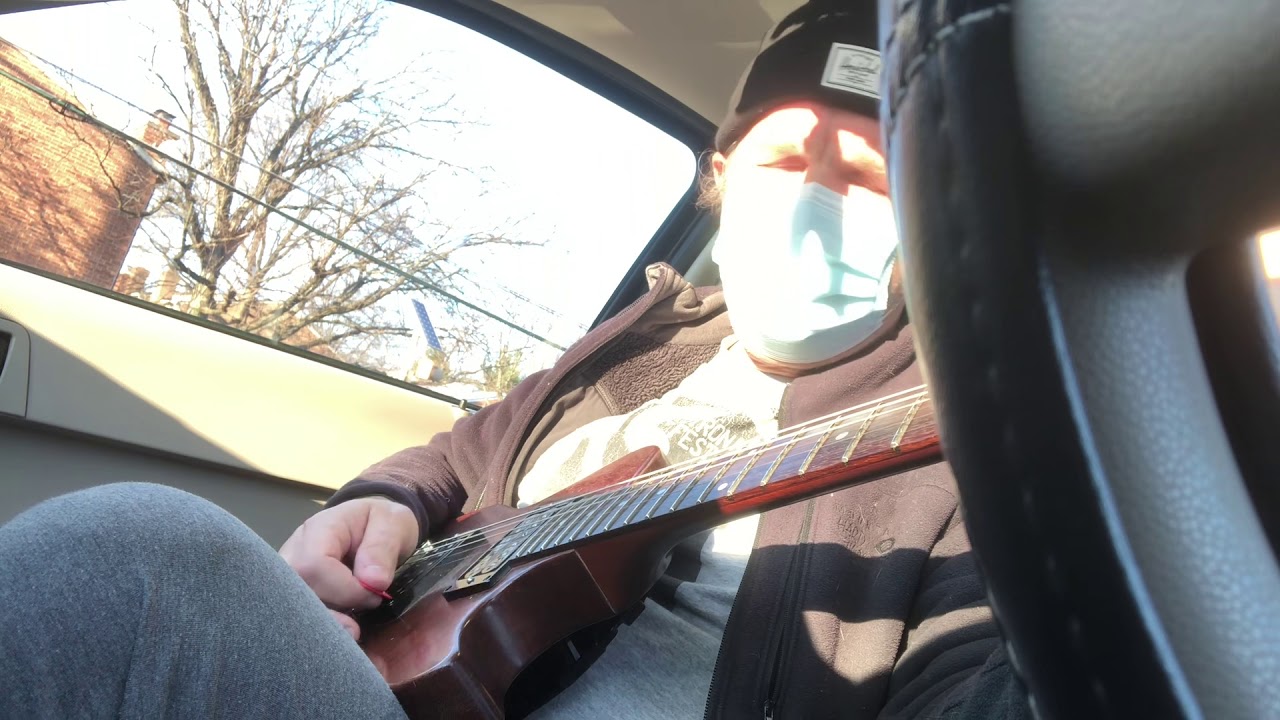 I’ve come to realize that I have to use the tools I happen to have in front of me when I have a moment to make music. Could be anything! Here I am improvising in the parking lot at the vet’s office to the tick-tock of the car’s turn signal.

This is my first Junto submission. This year I discovered pianobook. This site collects multi-sampled recordings of instruments (often pianos) and the stories surrounding them. I can easily lose myself in these evocative samples and it’s provided some much needed distraction this year.

I don’t have access to Kontakt but there are a collection of SFZ conversions of these sampled instruments on Github. I loaded Jon Meyer’s Kawai Felt Piano into Sforzando (a free SFZ player*) and created this short piece using Audacity to timestretch, compress and reverse a chord.

reminded me of the sound of calexico

This is great! A fully realized piece from an indicator light! Love the ingenuity.

I’ll go for the Brie+Apple+Celery , but there was a cheesy one that was awesome, “atomic cheese” or something, and I recall one with mushrooms and Jamon, I could take one-sandwich-a-day…
All are good, tempting and creative

I’ve been removing foods from my diet recently, but toasted tortillas have kept my sandwich press active.

Good technique. Welcome to the Junto!

I’m back after a month away and I’ve missed participating in the prompts. I kept it short this time as I knew exactly what I was going to do when I read the prompt. I have been learning things from the Disquiet Junto Project that have eluded me for some time and that I haven’t been able to make progress in my understanding or growth regarding: process… my voice… ? It’s stated below, but I will share that participating in these has taught me that I can silence my inner critic; get it out of the way; and actually complete some thoughts and ideas. Doing that has made me wonder if I’m starting to discover my voice. I’ll keep participating and see if that’s the case. Thanks everyone! Looking forward to listening to your tracks now.

This patch consists of all 6 outs of Just Friends fed into an RxMx. Mangrove Formant is being fed into the the v/8 in of Just Friends for some FM. For modulation, I’m running a positive triangle LFO from Quadrax into the Level in on RxMx. I am also striking RxMx with an AD envelope from Quadrax clocked by Pam’s. Finally I’m running the B out of RxMx through a Folkek Synesthesia and taking the CV out of Synesthesia and modulating Channel Select on the RxMx for scanning of the Just Friends outs.

All of this runs through Mimeophon in “purple” mode (idk which mode that is–it arrived yesterday), and is running through my effects skiff (Cooper FX Arcades [Generation Loss, PS1] into a chorale reverb on Big Sky.

That’s the how… The tool part of this… I embraced the lulling movement I’ve come to enjoy from my modular. I’ve pursued this sound in the Disquiet prompts because I gravitate towards and I don’t second-guess or over-think it because I have to meet a deadline. In other words, I’ve learned to lean into what I like and I’ve realized that yields results I’m pleased with–even if it’s not as complex or thought-out as maybe my “inner artist” thinks it should be.

Welcome to the Junto. I love your submission and the technique sounds really cool.

As some of you may know, resonant objects are a bit of a mainstay in my creative practice in installation (Infuser, Five Voices)and featured in several compositions/albums. I’ve found myself exploring resonance again throughout 2020, with the properties of resonant objects featuring throughout my new album, Mote Music.

Well, enough of the shameless plugs. Here’s a little composition that utilises a couple of domestic objects in concert with the ambience of my studio and a synthesiser.

The object on the left is a glass bottle; whilst the one on the right is a drinking bottle. They are of similar dimensions, but differ slightly in capacity.

A microphone is positioned inside each of the objects, so that the mic is about 2-3cm from the object’s opening. Through headphones, I can already hear the natural resonances of the object, since a ceiling fan overhead is eliciting a soft noise texture in the room. This gently articulates the resonances of both objects. You can hear this briefly at the opening of the track.

I then play a note (B) on a synthesiser, which articulates the object on the left. I then pitch bend and sweep slowly up to C, articulating the object on the right. I include a couple of additional notes upon reaching C. These won’t elicit resonances as readily as the main note, but there are very discrete excitations. I then slowly sweep back down to B and repeat the process a couple of times, adding more auxiery notes around the main note.

With thanks - as always - to Alvin Lucier for the inspiration all those years ago.

Hey All, I am going to go ahead and give my DAW ableton live some love.I remember when I got back into making music about 12 years ago I got ableton because a friend strongly recommended it. I really didn’t know what I was doing but I did get an APC 20 controller and 25 key midi keyboard.Then slowly over he course of a summer I learned a bit making tracks to 2 Pac accapellas.I had read that it was best to just keep making tracks not worrying too much about the finished product but just learning to do new things.I am kinda still in that same phase but it has become a part of who I am and what I think. If I go just a few days without creating I get a bit cranky plus i really enjoy doing this. Honestly most other things pale in comparison but I probably should get out more once covid is in the rear view mirror. Detritus Tabu is going away soon. It seems a good time for a change so his tracks will be disappearing soon. I will return in another form soon and you will recognize me by my real name- Hugh. I will include a picture of my bedroom studio set up. My synths ,organ and drum pads are off frame to the left. 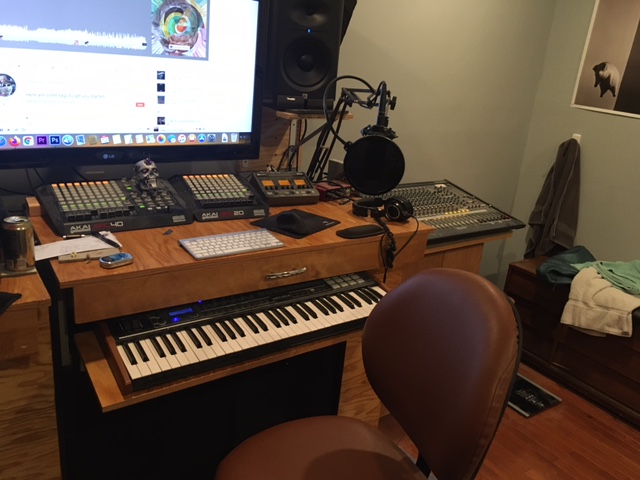 Real-time recording made in Pure Data.
I have recently been expanding my toolbox of sequence patterns in pd & this is the latest sample among what is a virtually limitless range of possibilities.

I loved this… there’s a light ‘pitter-patter’ sound to the attacks of your strumming over the unamplified guitar, matches well with the light tap of the turn-signal, overall, holds this delicately thoughtful feeling…
…like listening to the rain fall… on a guitar. nice one!

Very interesting sound ! How does the synth sound find itself in the bottle ? Through reverb only or careful placement ?

I struggled a bit with the prompt, trying to figure out what had I actually learned this year and other such introspective existential rabbit holes. Also struggled with the idea that I have anything helpful to share with others, this last year has been one full of doubt. After mulling it over for awhile, I settled on the idea of simplifying, thus the track title, Kiss, keep it simple stupid. I tend to pile on the textures and layers at times when creating, often muddying things up. I’ve tried to focus on simplifying and refining, both in music and life, also on finding beauty and hope in the small things.

Technical things. Very simple. Just a background drone made with a cello synth sample and some improvised piano things treated with a little time stretching and effects to make it more atmospheric. I feel like a lot of my technique is not very useful to others, I’m not much of a musician or a tech wiz, I just mess around with things until I find something that works. Maybe that is a tip, devote some time to trying something different, something outside of your normal, that probably won’t work, but just might lead to something special.

As a closer, I’d just like to thank everyone that participates in these challenges, especially Mark for guiding things. Contributing to these projects has definitely help improve my skills and expand my creative mind.

Detritus you’ve made some great tracks. What about putting a ‘best of’ on Bandcamp?