I went for quite minimal additions to the piece composed by @Peter
I really liked the sound of the string samples and the rhythm of the percussion underneath. For some reason I wanted to try adding an electronic sound to it. I used Orca to sequence a very simple random melody sticking with the notes of just D and A as in the first part.

This was fed into a minilogue xd. I’ve exclusively used Orca with soft synths until this point and I was finding it difficult to have control of tweaking both simultaneously.
So I wanted to focus instead on a simple sequence I can leave alone and modulating the synth myself live while recording.

I took Icy-rhythm from @zoundsabar and did this thang. It was an attempt at trumpet through modular, but I must have had some levels wrong, because you can’t really hear the trumpet and I don’t have time to re-record it. Oh well. Live and learn. Final musician should use the stereo track from the original piece IMHO.

I took Recording93 from @k-blamo and added a trumpet-thru-modular track. Final participant will probably want to do some mixing, and perhaps eq the final tracks a bit.

I used @ryanscottmattingly (Ryan Scott Mattingly’s) “The Sand Gets Everywhere”
Sand calls for surf! I played some guitar, a definite one off joke, but I had to try.

The playlist has been updated. If a track of yours is missing, lemme know. I generally do the update once a day, in the morning, California time:

I used Stray wool’s Bedding (from @pfig) as a starting point.

Usually I build new instruments (in Max) for each project. This week I used the same instrument from last week’s contribution. The heart of that patch is included in a screenshot below. What’s new is I have a keyboard controller for the first time in 16 years, so I actually played notes and knobs live instead of using some kind of sequence to drive everything. 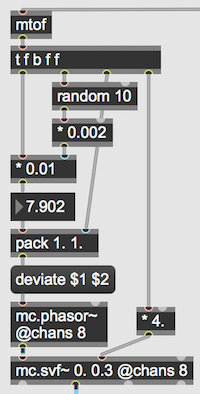 Second stage for Krakenkraft’s @krakenkraft Subdermal track. The first stage is panned left and my contribution is in the righ channel. If you want the stereo version, with centered drums, get this one:

Subdermal is a nice track and I immediately thought of deep echoing caves, windy mountain ranges or somekind of refuge. I wanted to see if I could make something that worked with the original and steer it towards something entirely different. I used Arturias Jupiter 8 (first time using it) for most elements, SEM for baseline and UVI’s drum designer for percussion.

I intentionally left plenty of room, spectrum-wise and rhythmically, for the 3rd pass. Length, bpm (120) and key (Am) is unaltered from the original.

This was different and a lot of fun. Seeing all the contributions this week and the last one is so cool. Thank you.

Here is my addition to @halF_unusuaL’s percussive track:

I added some short two-tone stabs with a similar reverb setting as his, and some deep chords. To help blend the chords with the hard panned percussion I side chained them with the percussion, and used the percussion as the modulator on a vocoder effect on the chords as well. Hopefully this inspires a third addition! The WAV file is normalized to -2db so there’s a bit of built in headroom for the third track.

did a couple of these

rolled a 47 and got murmurer - collab pt.1 [Disquiet 0472] by Sfeericle Records | Free Listening on SoundCloud by @blunderspublik

converted to midi with amazing midi. slow arp in live 8
thru iris2 then valhalla freq echo and supermassive
bit of preverb in audacity

again i converted the original to midi
in live 8 had this going thru protoplasm, ambient reverb, supermassive

When showering in the morning I mostly listen to Soma FM Deep Space One. Yesterday I heard something interesting and checked the playlist: some guy named Louigi Verona. I found his website and checked his “none-random number generator” Non-Random Number Generator which is some kind of insider joke for coders: While other “random number” generators try to give you an unreliable random number (which mostly, maybe never is really random (not only depending on how our universe really works)), his nrng reliably outputs the same, non-random number, in my case: 37. I’m telling you this, because its not important and just a chain of random events which lead to this track.

Anyway: So I took track 37 from the list, “safe”, an ambient improv of some kind, in Cmajor, made by rhein | Free Listening on SoundCloud. I wanted to add some sequencing patterns but nothing I made intentionally did work out for me. So I ended up with a sequence from the CA2600 from Cherry Audio (25$ at some Xmas sales, btw my recommendation, a must-have no-brainer (for 2600-non-purists)) and improvised on it. Cm may be a “safe” scale, but the sequence sometimes misses the mark, especially at the beginning … hence the name of the track.

Sorry for the long story. I did not seek perfection and think there is room for example for a drum improvisation with cymbals (or a classic theme thingy).

I preferred to work with the “stereo” version, but if you do not: here is a panned version:

This is my 1st of 2 contributions to the Disquiet Junto 0473…a duet with moduS ponY’s contribution ‘New Unit’ to disquiet0472. It is called ‘Leaf Blower’

I recorded the sound of leaf blowers working in Kennington Park, South London, on a grey, covid-19 lockdown day, during my one rationed daily excursion. These leaf blowers appear twice, obviously, in the track but also inscrutably as the sampled waveform which provides the melodic/harmonic base. There is subtle modulation of the pitch, and filter throughout. Tools used include:

Live electronic sequence, part 2 of 3, added to Somebody Do Something - Disquiet0472 by Daniel Diaz.

Electronic sequence panned to the right, part 2 of 3, added to: Subdermal Solo [disquiet0472] by Krakenkraft.

I was making a list from last week’s thread to randomly select from so I thought I’d share. The upper list are unused tracks, the middle are ones that are work in progress, the third list have been used. If you are working on one in the upper list (or make a track) let me know and I’ll move it to the appropriate other list. I’ll also come back and update based on posts later today.

Tracks have not been made, or aren’t in progress from the following tracks:

The following tracks are work in progress:

The following tracks have already been used in new tracks:

I was making a list from last week’s thread to randomly select from so I thought I’d share.

Spectacular. Thanks for having initiated this.

Thanks so much for doing this! I believe @Bick_Brannigan used my track already

Hi all, I recorded a little jam last night with Daniel Diaz’s Somebody Do Something . I added some additional guitar using my Martin acoustic. Added some delay and a little compression. Hope you like it… it’s rough, but it was fun.

Managed to sneak another one in! This time I added a drum part to Yasha’s “Greenwood Frog Chant.” I used the Patterning iPad app, put it into Ableton Live and played with the transposition and did a little Buffer Shuffling.

My first submission for this week, hoping to get a second one in as well. My random number generator landed me on @joyneski distorted pad which is right up my alley. I created my own less distorted pad for the right side of things and added a rhythmic element of repeated chords to create a base for someone else to take up next week.

Original track was composed of D major and E minor chords so I stuck with E minor for all my additions. Tempo for my stuff is 108bpm. Everything from me made in vcvrack, just playing around and embracing some randomness. I confess to cheating a bit and adding a little from each channel to the other side just to make the end result less binary.

Really enjoying the collaborative environment and seeing what everyone else is creating as well.

Second contribution of two for this round.

A duet featuring Guitar from High Towers & Deep Wells and Bass from Torpid Scorpion; Space left on the couch for a third.

Bass has mild compression and a tiny amount of saturation via Trash2. Guitar EQ to make room for the bass.

note: this track contains 0% brexit content. Give it a rest.

@gibbsdavidl This is mental, two players using the same guitar but they are in different, parallel universes, very funny. The dreamy reverses at end are great.