I was playing around a little bit more today with using MPE in Ableton to create Shepard tones and came up with a Max for Live thingy for this.

The idea is that you use to the per-note-pitch-envelopes in midi clips to draw in the glissandi (1st screen shot). An instrument rack (containing an MPE instrument, and my Max device) will then Shepardize it. 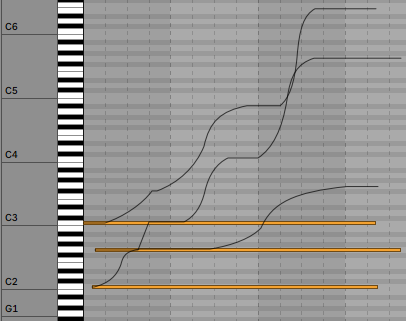 The way you set it up is as follows:

1/ Create an instrument rack with an MPE instrument (Wavetable/Sampler; MPE-capable vst’s should also work as long as they allow per-note modulation of volume).

2/ Do your sound design magic to get the sound you want.

3/ Put the Shepardrack M4L device in front of the instrument.

4/ Set the instrument up so that per-note-PB is activated (i.e. mapped to pitch), and map the MPE-slide parameter to volume (this is a bit of a hack: we’re (ab)using slide to handle the fading in and out of the different layers of the Shepard tone; see second screen shot for the setup in Wavetable)

5/ Duplicate the rack chain to however many layers you want your Shepard tone to have (see third screen shot).

I got off to a shaky start on this one, attempting to create my own Shephard sounds using Ableton tones, loops and automation. The result was noticeable but it didn’t really hold up the continuous rising illusion very well. I finally settled on a max for live generator called Shephard Box (Shepard Box version 1.1 by modul8tor on maxforlive.com). It creates a range of tonal options that I blended with some hectic piano runs. The whole piece makes me feel very agitated and uneasy and I’m relieved at the end of each listening.

I started out reading about the Shepard tone and began to build a very basic version in Cubase with a rather simple synth-sound, aiming at an electronic track. I have followed this tutorial, but decided to use distinct notes. I didn’t spent too much time to optimize the volumes, therefore it is far from perfect.
Somehow I didn’t think enough, so the repetition of the 7 notes of a scale lead to an 7/8 beat. I added drums and synth-bass, and layered the Shepard synth with a marimba.

Then I wondered about a female voice for some short phrases. I started leafing through looperman and in very short time found the wonderful acapella of ElineForEver - a song of its own. I noticed it fitted miraculously to the Shepard tone. Of course I had to adapt it to the 7/8 beat, and introduced pauses and repetitions.
The melody line gave the inspiration for everything that I added from that point on - different instruments, an upward Shepard tone in the refrain, etc.

Again I am very surprised and enthusiastic about what resulted from the project !

I took two Shepard tones, generated with Oli Larkin’s Endless Series plug-in, put them through a trance gate, into my modular LPG (an excuse to use the kit I built at the weekend) and then back to Ableton where I put one of the tracks throught Silo and applied some automated filter and volume. I was interested to see if the rising (and falling) tones remained.

It was an interesting experience, putting on this week’s playlist. Not easy listening, for sure. Part of that is, I think, that the Shepard tone effect is so specific, and is — unless you bury it in some way — rather in your face. It tends to “take over” the piece. Another part of it is perhaps that the psychological effect of the Shepard tone tends to be anxiety inducing. Whether that’s due to the illusion of moving while staying in the same place (definitely nightmare territory there), the siren like quality of the sound, or the botched expectations of expecting a resolution that is not coming… maybe a bit of all of those?

Some random notes I made while listening

@Bick_Brannigan: Heavy, intense piece. Can definitely feel your anxiety here. For me, personally, the falling Shepard tone doesn’t feel so much like literally falling (bit too slow for that, in general), more like things dissolving, losing their solid shape, their structural integrity. Which, of course, is also a case of things “falling apart”. Also: thanks for the My Dinner With Andre clip. And hope you are well!

@Glitcher: I found that when the rythmic elements come in, some of the tension/anxiety of the Shepard tones gets released. Interesting! Like the ear/brain finds an anchor and can then relax a little. Nice sound design, by the way.

@DeDe: Great, tense, spooky arrangement. As I was listening, a small beetle happened to make its way across the floor where I was sitting. The music immediately turned this into an epic, danger ridden journey

Did you build the piece around the Shepard tones, or did you have a general shape of the composition/arrangement before hand? Lovely instrumental sounds: your own recordings?

Also: agree with what you write about it being hard to get the auditory illusion part right. Listening to the pieces in this week’s playlist that employed the Shepard tone in its traditional sense (evenly paced glissando), I mostly have a definite sense of the cycle starting up again at some fixed point. Acoustic issue or psychological?

@33per: funny what happens when you put delay/reverb on nature sounds. Your piece immediately conjured up the image of a tropical forest, a small, still pond lies at the entrance of a cave

I liked the idea of shepardizing the bird calls. (The effect is very subtle in your piece: actually missed it on the first listen). Inspired, I tried my hand at shepardizing the owl that has been keeping me company at night these last weeks.

After trying all weekend but not enjoying what I was coming up with I decided to go the more ambient route. Exported the various synth parts I had going and stretched them to varying degrees. Stream The Shepherd I Do Not Want by IHauntGhosts | Listen online for free on SoundCloud

here is my track:

uses a choir sample quite processed and synthesis in bitwig.
My shep tone wasnt too convincing , its a bit steppy.

A rather uninspired Mangle treatment of a Shepard Tone track pinched from YouTube ended with an accidental glitch overload. So I made it an integral part of the track. Then added a track produced with Audiobulb’s ambient v.3, and some re-processing of the glitch.

Then ran out of time, but here it is, late, anyway.

@AlvaroDeCampos hi thanks for your words, I had the overall idea of orchestral blast glued together by the constant Shepherd Tone, but the actually make it I started bu the Shepard and then built the different section on top. Most of the sounds are from Kontakt libraries, only the cello and some cymbals are mine.

Glad I could provide some bombastic grandeur to a little creature’s journey! I should retitle The Shepard and The Beetle…

@AlvaroDeCampos Thank you for your lovely feedback.

Loving your Night Owls track, its sounds like a choir of children. You definitely can hear the tone in this. Food for thought. This has been a very fruitful and inspiring project.

Major thanks to @Rprecht for having proposed this project.

Nice, Curious if you had a particular doctor in mind?

They’re all great - but Tom Baker was ‘my’ Doctor (giving my age away a bit), David Tennant. was, well, David Tennant … and now it looks as though, with the return of Russell T, we’re in for yet another escalation in style and quality.

I have actually come to think that the Shepard Tone is a really great analogy for the whole Time Lord regeneration concept … but that’s probably a whole new thread in itself.