Lately I have been obsessed with simple ah ah -vocal samples ala The Art of Noise Moments in Love, so I made a track combining two duo phonic synths, a bass line, and a vocal sample melody. I turned everything to the left, and left several entrances for remixing, looping or coming in with extra input. It all became a bit distorted when panning so I´ll might look into that tomorrow. 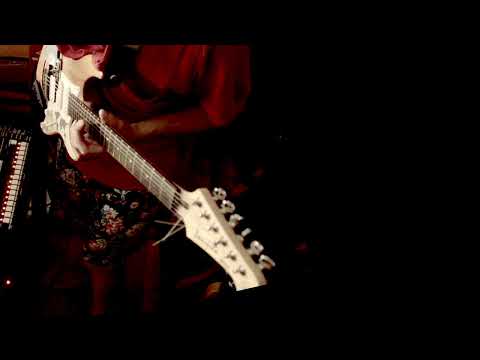 I’ve exported a couple of synth parts played with guitar.

Interesting idea - and I tried to make this challenging. If it helps, the two pitches are D and F - and below a processed voice is quietly reading instructions for another Disquiet Junto Project.

Playlist is updated. If your track is missing, let me know. Thanks.

Recorded as a 24-bit WAV using a variety of modules (various Dreadbox Chromatics and Erica Synths DIY Swamp / BBD delay for the most part) which were then run through a synchronised Boss DSD-3 sampling delay pedal and an old Rozz phaser that seems to have returned from the dead.

Atonal all the way and nearly four minutes long, but this allows for fading and cropping if desired.

This is my first ever submission and I’m excited to get involved.

This was created using VCV Rack. Generous amounts of probability and a euclidean sequencer (Eugene) used to create the beat to avoid repetition. LFOs used to modulate Eugene and cutoff/resonance of filters.

Very mildly edited in Ableton but no EQ/compression/limiting added before export.

Looking forward to working on this with some of you

I was listening through some recent field recordings and thought this recording of me hurrying down ten flights in a concrete stairwell of an older apartment building in San Francisco might serve as a sort of free rhythm track for the next pass or two. I felt it could use some emphasis of the resonance on the landings, which I added with EQ and a subtle delay. There’s also a short noise loop at one point. This was a fun disquiet when I did it two years ago!

Haven’t participated much lately, been a bit uninspired, but I do enjoy these collaborative projects very much. It was a sunny but cold day here so I went with that as inspiration.

Recorded in VCV Rack2. BPM is 40 and key is C minor. Panned to left as requested. Just a couple simple melodic kind of voices with some delay. Tried to leave room for additions. Feel free to EQ and/or mangle as you see fit if you decide to add on.

I often start files with some drums and one instrument, thinking I am setting up the scaffolding for a future song… but have a lot of files that only get that far. This is the most I’ve completed in a long time, and very quickly; so it is probably a mental thing - its easier as part of a bigger collaborative project handed to someone else.

The droney keyboard bit at the beginning was a start on Junto 0524, but did not submit it. The percussion is their “Orchestral” kit, pounded out on a Korg NanoPad2, which is easier than on a midi keyboard for some reason. 130BPM.

Caveat: Everything is panned to the left per the project request. However Garageband’s panning knob isn’t knocking those drums out of stereo, so I’m still hearing them in the middle(?). Also Garageband adds an annoying 2-4 seconds after the end of song. File uploaded is an m4a; not sure what Soundcloud will give you.

I love these ones

The challenge is always in leaving space - I’m not very good at that generally!

For my part, I created a 15-note long sequence, that has it’s start point changed every now and again to shorten it, and also has triggers that are changed occasionally, and random notes added in varying amounts at different times, to add interest and movement. This sequence is played on Rings with a plucked guitar-like tone, that has reverb and echoes added for more movement.

@krakenkraft nice progression but I wonder where the extra space for someone to fit in will be …
@Fnubi - nice ambience on the track but it will be interesting to see how one can add to this …
@Sternklang - you had me at “Art of Noise”
@ray_cobley - yes, this is inspiring!

@PaulBeaudoin Yes, I also had the feeling that it could already be a track that stands alone – on the other hand: there was nothing I could have left out (besides a quiet drum gimmick which was meant as a help to recognize every second bar).
And I sense a lot of room for distorted voices and/or ugly beats (I updated a bpm info) or with whatever you will surprise me…

This was an interesting challenge - I think, in general, leaving space is something that I struggle with in my work, so I really had to fight the urge to put more stuff throughout this. I ended up recording a ~25 minute song and then cutting out the 3 minute section that I think is the best fit for this prompt. It is pretty sparse, and I think would add a nice textural background to a trio.

I started with the goal of trying to recreate the “disintegration” effect that is in a lot of William Basinski’s work, using only the Digitakt (and the Microfreak for a little bit of drone). To do this, I recorded a piano snippet from “Jupiter” by Holst. I chopped up each phrase on the Digitakt, and split it into two separate tracks that could be changed individually. As the piece went on, I increased the bit reduction and filtering, and decreased the probability that any given note would trigger. I switched from only playing one-shots to potentially playing backwards/loops/different speeds.

The snippet that I ended up using is towards the very end of the piece, when probability for each phrase is down to about 20% chance to trigger. I am overall pretty happy with how this turned out, and am interested in trying to explore some of these techniques a bit further.

Here is the full version of the recording if you are interested in hearing the gradual changes in real time: Stream jupiter full by super secret noise party (pidgin) | Listen online for free on SoundCloud

I think, in general, leaving space is something that I struggle with in my work, so I really had to fight the urge to put more stuff throughout this

Thanks for having noted this. I think, in many ways, exploring this idea of “leaving space” in one’s own music is, in a way, the “hidden curriculum” of this particular sequence of projects.

Started off with a simple D-G-E motif on cretan lyra with some double-stops and glissandi for variety (104bpm). Added a little delay, eq & phasing for thickening up the sound.
Added an electric organ drone and a bass line, then removed them both, because… space.

The track is in mono and can be panned to the left as desired. Besides that: cut it, crush it, space it or completely rearrange it. Please go nuts!

Chords! After I worked through this chord progression, I realized it sounded a lot like a Low song that I like (plastic cup?). Oh well! I think it could certainly be further processed, which could be nice.

Acoustic guitar with some valhalla delay recorded with my rode nt2-a.

Thanks! Looking forward to further work on this.

This was done in Max. I began trying to make some bass sounds; these were not exciting. What turned the patch around was removing the main oscillator and putting in its place the sound of a window closing. The window mangling became the “fills” of the resulting drum track. 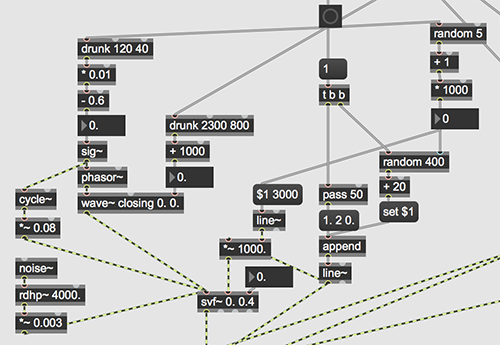