Barton Musicalcircuit Analog Drum. Sold my first analog drum. Now I want one again. Have to work a little on the panel and get some knobs. I like BMC. He has some nice modules. All thru hole. You get a pcb and a raw al panel. No fancy components.

Wow. They are good value if you just get pcbs/panels in a letter. I have plenty of standard components too. I looked at the site years ago but was worried about getting hit with import tax. The analog drum has a good sound. Nice one and congrats on your build

2LFO SH, analog drum, dual logic, decaying analog noise (great white noise!), four quadrant multiplier and panner and the gate delay are my favourites. I have another to build. When ready I will reveal which. And yes there is an import tax (for some of us. About €14 for me).

The whole number 23 and related wikipedia entries made me try out something that was set up to be a bit mathematical, with 23 bars of generated music of 23 lanes of notes that follow a progression that modulates from C to D and back. I grouped them into 6 groups which I staggered in 4 bars (4*6-1 = 23), had everything run once all together then let groups drop out.

For Disquiet Junto 0529, the square root of 529 = 23. I used this number to set the duration (2:30 long) and to divide my track into 23 mini slices (around 6.5 seconds each) for various automations and pacing - they become rather subtle - perhaps you’d never know they are there…

After using my voice, and counting, I ended up humming into a Chase Bliss Audio Mood pedal which conjured harmonious moments that I ended up playing like a small instrument.

Last night, the sounds of my family at a Hibachi grill prompted me to capture some audio with my phone my shirt pocket. I squared the intensity off with some in my back yard recording bamboo in the breeze. Family time. Alone time. Always need both.

Riffing on 23 lead me to find a 23×73 encoding of the Arecibo Message, which I chopped down, arbitrarily to a 23×23 encoding. I then used that as the basis for randomised chords, modulated by a Euclidean rhythm of 23 steps, which was then further mixed with a 23rd of the original stretched to the full 23 bars. Throughout there are settings at 23% or 23ms or 77%, etc. It’s not what I was expecting to end up with.

Hello everyone. I missed the last project due to hardware problems
Anyway … when I saw the topic of this new project I immediately thought about developments related to metrics: DNA, genome, Euclidean sequencers, Palmistry, Leukocytes.
… Then, being Italian, my thoughts went to Dante and the Divine Comedy. I chose Canto XXIII of Inferno. I used voices of various famous Italian actors who read this Canto. 14th-century Lyrics. Eventually the track became a kind of “divertissement”, probably not overly serious.
Sicut transit gloria mundi.

First, when i learned that 23 was the default port for telnet (teletype network), I thought it was the perfect occasion to learn how to use teletype in vcv rack.
I spent some time on it this weekend, but did not come up with something interesting enough to post for this week’s assignment.

So instead, here is a short deep sea piece tuned to 23edo made using aalto.

Using the number 23 and various multiples as the starting point for generative ambient, letting the music develop from the math or something. I feel perhaps I constrained it a bit too much with convention, making things a bit too pretty, but who knows.

BPM set to 23*3, lots of sample and hold and randomized sequencers with various percussive elements driven by a Euclidean sequencer set to 23 steps fed into a granular delay for textures.

For me this week’s project was a wonderful contrast to last week’s: Whereas I mainly improvised on the keyboard last week, this project sounded to me like algorithm and construction.

I had the following inspirations from the number 23:

I proceeded with the following steps:

It was a great experience to construct a track in this more algorithmic and arty fashion where I only control the concept but not the single notes or melodies.

Sharing a stat from soundcloud for this project.

This experiment played around with 23, 23^2, and 23^3, considering the digits as numeric sequences where 1 is a moving tonic. “2 3” repeats throughout, starting with piano. The mode alternates between major and minor, and the corresponding chord and tonic provide accompaniment as they change. A “5 2 9” figure is added, conforming to the current mode, and then “1 2 1 6 7” similarly. The conformal loop finds its way back to where it started.

Procrastination got the better of me last week and so I was resolute to get a track in for this one.

23 is the number of the last house I lived in with my family before I moved out at 18.

This piece conveys, cheerfully, the way time (for me) seems to slowly erode my memories and I find it hard to remember who I was in the more distant past.

It wasn’t quite what I had planned but I couldn’t work out the subdivisions properly unlike some of you brainiacs! I listen, mostly, to a lot of complicated music but I have no skills with an instrument and cannot really grasp any of the theory.

For this, I mashed around in VCV Rack until I got a vibe that I liked and then made some further editing in Ableton.

I listened through to the whole playlist before I posted this and I have to say that everything I heard blew me away. Everyone here amazes me with their talents. Thanks for sharing.

For this composition, I picked a rather unobtrusive wood block and set it to 23/32 time so it would gradually move forward by a 1/23 note. I did this so by the 23rd measure, the wood block would cycle back to beat 1.

Through musical typing, I rearranged the stems so they would “resemble” the number 23. The initial patch I selected was a toy glockenspiel, but I quickly switched it to a sweeping synth sound later on. I attached the image of the 23 below. 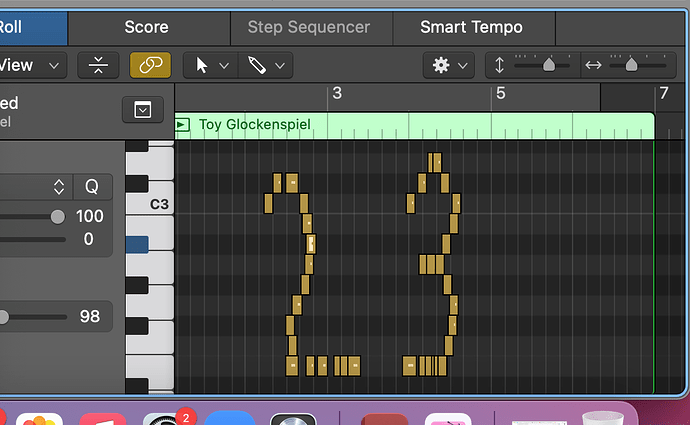 The original idea was to release this alongside another track I wrote for the project titled “Two Over Three” (a vertical 23), but I decided to exclusively release “Shifting 23” instead. It is very likely that “Two Over Three” will eventually be released in some form, but now is not the time.

I took the following passage from Wikipedia and implemented it in ChucK:

Octagonal numbers can be formed by placing triangular numbers on the four sides of a square. To put it algebraically, the ‘‘n’’-th octagonal number is

Sorry, but I had eye surgery last week and am in a bit of pain or I would explain more. It took all my energy just to finish it.

A great week, wonderful to see such creative engagement. No stone left unturned in the quest for 23 nirvana. Thanks to everyone who contributed