Process notes -
This project was a bit special to me because I sleep with brown noise and a fan and sometimes as I am waking, I swear I hear music that is not there.

This track uses an ipad recording of the same fan and brown noise which was then further manipulated with the ipad field recording app FieldScaper by Igor Vasiliev. I then simulated one of the melodies using a guitar sample I recorded in November 2013 and then pitch-shifted.

I have a standard finishing process that includes Ableton Live’s limiter and utility plugins followed by applying iZotope Ozone Elements at my discretion.

For this week’s project I took an old field recording from my back garden. It captured the trickle and splashes of a bird bath fountain, cars driving down the road and birdsong. I set up my modular rig and created a very loose synthetic approximation of water burbling, crows cawing traffic and tweeting. I then got a bit carried away in the middle but kept in it cuz it was fun going a bit crazy.

First of all, I love noise, in all its many forms. Long ago I went to a concert in Tokyo that was labelled as a “noise experiment”. When I arrived there was a group of patiently sitting people, waiting for the thing to begin, and they sat like that all the way through. It was deep, intense noise. After some time you started hearing all sorts of things in it, beats, melodies, even words (I did anyway). But after 40 minutes, I was saturated. It was only the first half, but I left, an unforgettable impression to this day.

For this Junto, though, I took it a lot more light-hearted with rain on tarmac and cars driving across it at certain moments. I actually let Ableton figure out what melody and harmony it would make of it with its built-in feature. Stunningly it ended up producing something in G major, so I took that and heavily modified it into piano, prophet and some granular stuff.

I liked this weeks brief…and have been slightly pre-occupied with Pink noise lately so plumped for that Spectrum. Some fade in applied and a fade out along with some low end being increased that has brought a ‘mirage’ into being – ‘voices’ within the noise (to me at least.)
Take care out there wherever you are.
bb_r 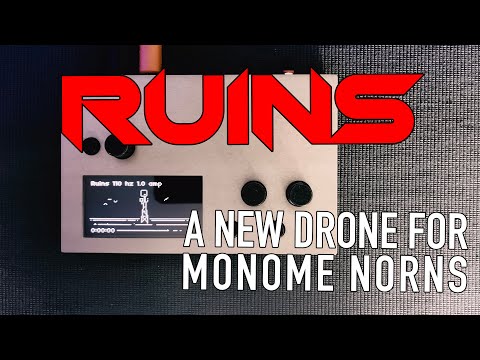 Ruins: a reality darker than fiction

I started with stereophonic filtered white noise that simulates wind. After spending hours with it, I knew it didn’t need much. Just some metallic accents, transients. Deeply reverberating.

As I already started with the white noise in SuperCollider (my first interaction with it!), I decided to add the rest in SuperCollider as well. This took me a day. But this was the easy part. Then, adapting it to run on Norns inside the Dronecaster script turned out to be a larger challenge.

I wanted to add some sequencing based on what I was projecting in my mind, and it turned out it’s pretty doable with SuperCollider Routines. Sadly, the idea behind Dronecaster was such that those SuperCollider constructs were not possible to use. So I spent another two days rewriting what I had a few times, and finally resorted to adapting Dronecaster just a tiny bit so that multitimbral drones sequenced with Routines or Patterns are now possible. The PR is on Github, hopelly Tyler will accept it.

I happen to think my large metal fan that I use to cool down my house is particularly musical, so I sang a duet with it. And added a few guitar chords in the middle. And a chugging notch filter.

Duet with Fan in Db Minor

At the beginning of the track you can hear the noise I created along with the guitar part it inspired. Simple pink noise wasn’t working so I put it through a granular effect (Silo) so it would be more dynamic. I put some headphones on in the dark with that noise playing and noodled on my guitar until I captured a mood. I meant to do more with this track but time got away from me.

Inspired by the softly beating rhythm of the two USB fans trying to keep me cool in the summer heat while working from my home office.

A couple of Arturia VSTs, Jupiter-8 and Juno-6, being mangled and filtered with an underlying tune that I heard in the beating of the fans.

This week felt like looking at one of those Magic Eye posters from the 90s. I couldn’t see the sail boat (bonus points for getting that reference haha).

I made a patch in VCV Rack that created some modulated noise using different colours.

After recording some of it, I took it to Ableton and used its ability to extract melody and drum information.

Using those to inspire me, I built the track. With my limited abilities to “play,” I was pleased with how this sounded after a few hours of building it into something.

The noise forms the base of the track with some musical “dressing” around it. A fun experiment and it made me think about composition in a different way, which is always welcome.

So, this is what I came up with. I used a synth that I ran through Augustus Loops, and then added a guitar and bass.

My “white noise” is the sound of the wind.
A melody emerges from the wind…
From: Vent3

With a Pure Data patch and edition with Audacity.

The Pure Data patch analyzes sound into its main harmonic components and resynthesizes them with a bank of 64 sine wave oscillators.

Sound (noise) source for this is a recent field recording which ended up being mostly noise from nearby road.

Processing through my modular system (Beads doing the heavy lifting) with manual modulation.

Not so much sculpting as it is turning it into more noise.

For this great project I found inspiration without looking for it: I was preparing my (home-office) lunch on Thursday and suddenly listened closely to the vegetables simmering in a frying pan, while the extractor bonnet above the cooker hummed.
I discovered some melodic figures and decided to work on them. In addition I came back to the inspiration of Disquiet 0504 and tried to recreate the whole soundscape.

For me the sound called for strings. In the end I used 5 instruments of the Spitfire BBC orchestra, and 3 instruments from the Olafur Arnalds Evolutions. I added a Hauschka Toolkit piano for the high notes.
First I started building the soundscape. Then the melody I heard is introduced, and later expanded. In the outro the recording of the “noise” is heard, treated with the Audacity vocoder, paulstretch and several Cubase-effects.

P.S.:Twenty-nine years ago I travelled around New Zealand, and also visited the geothermal area of Rotorua on my bicylce tour, a lasting memory. Somehow the close observation of the frying pan brought back this impression.

the sound of a few drops of rain, building into a swarm; a respite; that makes everything better for now

The wind was really kicking up as I was setting up my microphone, so the howls became my original sound source. Two tracks were recorded with one panned to the left and the other to the right, the latter of which received an envelope for no particular reason.

Next was the white noise, which I controlled from my iphone using the NoiseMachine app. The sound was projected from a Bluetooth Bose speaker straight into the condenser microphone. A low-pass filter and EQ were applied to the white noise to better blend in with the track. To complement the wind and white noise, I typed “breath” into the Logic patch search engine and selected the synth pad “Breathless Space”.

33per: i love how your track features only snall fragments of noise, used as percussive sounds and supporting the more melodic elements. Your song doesn’t literally emerge from noise, but i can perfectly see/hear how listening to noise inspired you for this track.

Davidstelfox: i like your angle on white noise from a ‘natural’ source, not synth or generator, but fieldrecording. The other recordings really added more interest to it for me.

tetkik.ve.tedavi: first listening to tour track i did not recognize anything from the white noise assignment, i then read your description of the process and realized this is one the things i love about these challenges: you start with a prompt like ‘white noise’ and end up with a soft sow melodic ambient track… So i think your track ended up to be much more than noise becoming a melody, i think it illustrates how a challenge or instruction can turn into a whole different end product. Like!

I’m glad that I was able to find some time tonight to do this assignment. I’m pleased with the results given the time constraints, but I wish that it could have made it longer. Anyways…

I started this assignment by listening to noise that was picked up by my Soma Ether when I held it above my M8. The noise had a subtle rhythmic pulse, which I recorded into my M8. I looped a portion of it and listened to it intently while creating a preset on the Grandchild script using a recording from Bidiwave. I played Grandchild with my faderfox controller for a quite a while and recorded some of it into my M8 where I chopped it up and synced it to the noise loop that I had originally captured. I ended up putting an HP filter on the noise loop which sort of made it sound like a distant hum of the ocean. The final layers came from textures created with the M8’s fm synth.

Hey thanks for listening. Yes, I did not really set out to create anything melodic but just humming along and then transforming the hums to music on the keyboard took me there. I am new to junto (my 2nd) but I figure there’s no right or wrong path or result, so I let the process take me anywhere. It’s been amazing to experience this and read about others’ process and hear the results. cheers!