I can’t believe it’s been 4 years since I attempted a Junto project! This week’s prompt seemed like a nice place to jump back in.

To make my drone I recorded one note at a time on my Korg Minilogue and manually adjusted the filter frequency and resonance along with a few other parameters. I also threw in some quiet natural ambience that I recorded last weekend. I tried to keep the ambience in tune with the drone.

Hi everyone! Finally have been able to rejoin the Junto for a bit of sonic fun! Love this prompt, as I love making drones…

Recently, I’ve been having a lot of fun using Ableton’s Simpler device to make my own instruments. Here, I’ve used a field recording of a cricket [taken outside my house] and Raum [vst reverb plugin] to play this chord.

Perhaps not so drony. I sequenced the notes of the chord in Achologies and played them through the internal synth and midi to Pluto. Then I gathered it all in Coco for some slight processing. This resulted in an 8min track, which I then jumbled together in Ableton.

Edit: updated the file slightly. New url for the playlist-minded.

Made with NI Maschine+ (Reaktor and Massive). Two Massive heavily modulated drones playing the bordone Cage chord, going through a couple of pulsating Reaktor FXs and a band-pass panning phaser. On top a free played pianoforte pattern over Cage chord notes with an ostinato mini-theme on the left hand.

I wanted some movement in my part. So I mixed Felt Instrument’s Helenko, Tapes 01 Ensemble, and Slate & Ash Landforms. Well, that was a short and sweet assignment

Looking forward to all your contributions!

Hi everyone. Thank you so much for the engaging messages and discussion re that single chord - for catching the wrong pitch, for correcting the MIDI file. Looks like we have several interpretations of what sould be sounding too. And for a moment I stressed out - I’ve got this wrong! - but then I did check with what’s sounding in Halberstadt (there’s footage on YouTube) before sending the file off to Marc, and it did sound different again. So who knows… but now, listening through your wonderful contributions, they’re so wildly eclectic that I think it probably doesn’t matter all that much. The plan is to edit one single long drone from the contributions and play it at the Cage Room as a loop. Will let you all know how it turned out.

And you know what? A friend just alerted me to the fact that John passed away exactly 30 years ago today. What a wonderful coincidence that we are gathering here around a single chord by this gentle giant of music, and honoring him in our own small way.

I split up the chord into a fistful of Ableton Live tracks, all with (not too) different Kontakt instruments and placed them in space by pan and reverb. Every note had a chance of being played of 50% per 90bpm bar. Some noise was added because I felt it being too clean, accepting that this and too much movement would maybe not correspond with the spirit of Cage’s piece.

An export was done and the mix happened in Reaper, where a Valhalla Delay with 4 bars lenght on the master track repeated whatever is played to smear the notes into each other. The result was the 8 minute track Chord Cage. I took a 3 minute part out of this and made it into a loop by adding the beginning to the end to comply with the rules.

The Loop version was intended to be a byproduct; after listening to the looped version looping for half an hour or so while creating the cover I’m not so sure whether I really prefer the long Chord Cage, which works standalone with no context, over the Chord Cage Loop, which can be played virtually endless.

Very simple processing - the chord was played by the default sine wave in Logic’s sampler with the filter reduced to zero after a fraction of a second. The filter was then allowed to open back to 100% over 90 seconds. The resulting audio was fed through Valhalla Room and Atlantis Dual Chambers reverbs, mastered, then used as a sample, triggered in reverse and looped.

After giving it a bit of thought I think I’d rather enter this one as my contribution this week. Although it (obviously) deviates from the pitches given I feel that equally as important as the absolute pitches in any chord are the intervals between them; the internal intervalic relationships are what really define a chord - it can be rendered a bit higher, or a bit lower, but the uniqueness of a chord is defined by the space between the notes (or so think I) …

Here is the ‘Cage Chord’ as a Shepard Tone … pitches all over the place - intervalic structure maintained.

Jinkies … talk about showing your working out …
This is much more musical … Final Answer! I created this drone in PureData using the Karplus-Strong algorithm as a way to form the individual tones.

What I particularly like about the great projects of @disquiet : The inspirations are so different. For the last project I improvised on the keyboard, and now I simply play 6 notes throughout the track…

I decided to base the drone on my new and my proven favourite sounds…
I created the first four tracks from steady sounds of the Epic Choir, treating every track with different effects. Then I automated inputs of the instrument (dynamic, expression, microphone-mix) and selected effects by recording with the Korg nanoKONTROL.
Next I added two staccato tracks of the Epic Choir. They were played by Transition (from codefn24) triggering single notes of the chord with much randomness. Valhalla SpaceModulator and Supermassive turn them into a drone, but I wanted to retain recognisable voices.
Next came a Hainbach Landfill Totem sound, also highly modified with automation.
From my proven favourite Olafur Arnalds Evolutions I used two single sounds (Cellos) and one grid. For the cellos also dynamic and expression were automated to blend in and out and change the sound. The grid was played by stochas, employing much randomness in probability of note, velocity, length and position.
Last but not least a Olafur Arnalds Stratus Synth plays the chord with highly randomized synth swarm-sounds.

I find it fascinating how the sounds blend together. Only by muting single sounds I could verify that all are a part of the whole soundscape, none is redundant.

I am not to sure whether this is a drone. I called it eclectic since I think I used elements normally not part of a drone. I was struck by the coincidence that @TobiasReber used that word in his comment to the accord-discussion. Thanks Tobias for the great projects!

Each note uses a different instrument, with some effects applied along the way.

This week’s prompt: A John Cage chord (E5 A#4 E4 D#4 Db3 C3) meant to be as slow as possible, in a 3 minute loopable drone, for potential inclusion in a music fest.

The chord is strange. Sort of a Cm7b9 with a wrong note voiced in a blatantly hostile fashion. And the idea took me to a place which is not appropriate for a music festival, or looping, or droning, or maybe even human consumption. I’m not sure. This one may be bad. For the first time in a while I’m really not sure whether to hit the upload or the trashcan.

But it calls on a lot of sounds i’ve been experimenting with around synthesis and feedback, instability, and random structure. And all the voices (voices? sure I’ll go with voices) here have those characteristics. And what the heck. The communities are friendly so toss it out there.

Mechanics: A stack of 6 or so Surge XT instances in Logic with a lot of patching, a lot of automation, and a bit of compression on the back.

I just fed the sustained chord notes to 2 soft synth patches and a chain of delays and reverb. It’s an oppressively hot night as I type this, think it might have influenced my mixing decisions.

I love the disquiet junto : takes me to places I would never normally go !
looking at the chord, I felt upstairs was fairly clear (E5 A#4 E4) but downstairs was pretty murky. And I was planning to move from one to the other by emphasizing the higher and then the lower. In the end tho’ with the 4 synthesizers I used it all got pretty murky!

My intention for the piece to be played at a low volume as sonic background, but it’s not essential.

This time I decided to keep it simple and simply record a few layers of the same VST synth (in this piece, Buchla Easel V from Arturia), with each note of a chord played by a different voice. Then added some slow panning and amplitude LFOs to keep things interesting and give each voice its breathing space.

To avoid a muddy mix, I heavily EQed all 6 layers, removing much of the low-end for each track, often getting rid of the fundamental frequency and tried to make sure each layer has its own space in the frequency domain. Finally, I compressed the final result.

I was intrigued by the idea of creating a 100% seamlessly loopable piece, and here’s a strategy I came up with: 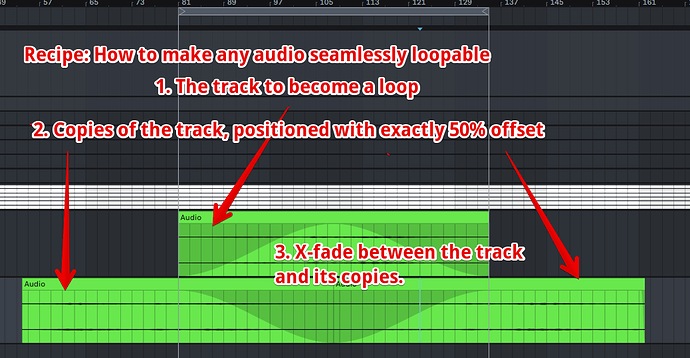 Thanks to the crossfades, there’ll be no seams anywhere and the resulting track can be seamlessly looped. In effect, the track will start and end from its middle - with the copies track playing and the original track effectively muted.

This strategy is by no means universal but could possibly work for many drone pieces.

Have a great weekend, everyone!

In the spirit of John Cage I thought “F*%k the rules, I’m making what feels right to me.”

Hearing his voice in this interview, I felt that his pitch came quite close to the actual chord and decided to use just his voice. Using repetition to create a sort of droney effect.

PS credit for the interview is unknown

My idea was to bring some motion into the chord by using the method of Klangfarbenmelodie, i.e. to use different instruments or instrument groups subsequently to intone the chord. The motion in timbre creates the illusion of motion in pitch.

The full chord is used by the instruments that produce the basic continuous sound. The single notes of the chord are used instead to create the rhythmic elements that overlap the base, percussion / drum samples processed by granular samplers.

New here - participating thanks to a timely notification from a friend. I had multiple tracks, but like others I eventually elected to keep this simple. The quasi-metalic tone along with manipulation of the volume of individual notes in the chord produced some difference tones. These in turn have introduced some interesting inner melodies.