I would like to build some sort of handheld device where I can press a button to send a gate to my modular. Ideally it would have multiple buttons and the ability to adjust the gate voltage. With my relatively limited electronics knowledge I came up with this circuit: 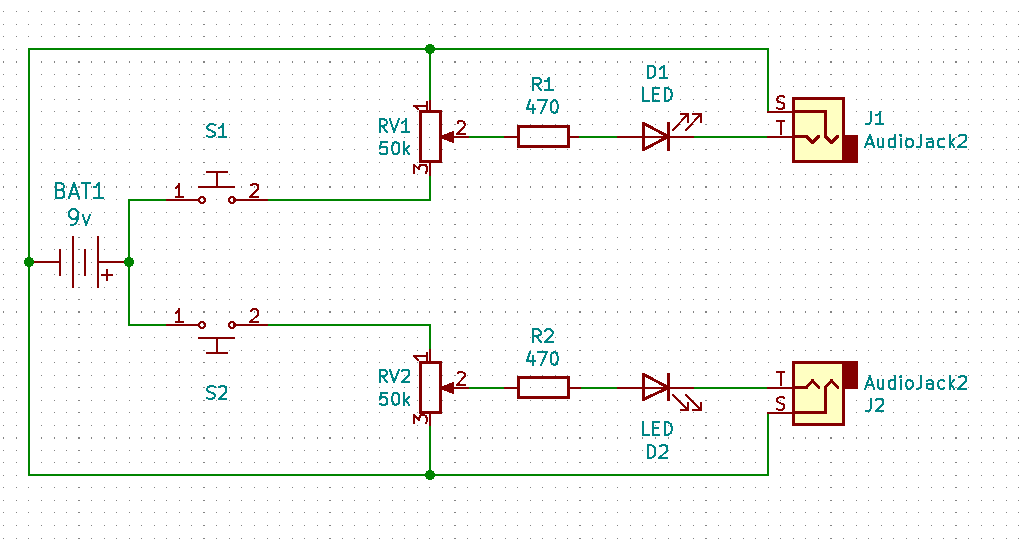 But, I don’t really know that much about electronics so this design might just be a great way to destroy my synthesizer. So, would this work at all? Is it dangerous? Is there already a device that does what I need? I definitely do not want to plug a 9v battery into my synthesizer without checking with an expert first.

I would aim to run such a thing off the power supply on the modular meaning the voltages would be referenced to ground and the device would avail itself of the full modular voltage range. You could fairly easily make a “cascade” of resistors and switches to divide the supply. The result would be ground potential when disconnected and up to the supply voltage depending which button you press.

As long as the ground is connected between your circuit and the modular, the battery should work. You could use two batteries to get negative voltages if you wanted.

I built something similar for my 0-coast, and it worked well. I didn’t need to connect the grounds together because, with euro rack, the grounds are connected via the jacks.
You’ll need a debounce capacitor to ground on the switches.
You shouldn’t fry any module so long as the voltage is less than the supply voltage. Euro rack is 12v, so a 9v battery should be fine.

In terms of safety, you might bump those output resistors up to 4.7k to further limit your current draw.

i do this idea via fsr. send x volts in then just tap the fsr for the gate. so many ways to skin that poor cat. thanks for reminding me.

Thanks everyone for the suggestions and info, I really appreciate it!
WRT to the LEDs, I only added them there as reverse current protection for the outputs in case I plugged output to output accidentally. But this is all based on some barely understood stuff I’ve heard elsewhere. If they were made parallel would they still work that way? Do I even need them? Also the resistors on the output were just there for limiting current to the LEDS. I didn’t even know I needed an output resistor

What exactly do they do? I don’t really care about the actual lighting part, I just don’t want to damage anything when I inevitably plug things in wrong.

You want output resistors so that the possible current draw is limited when you inevitably short the ring to shield, which happens every time a cable is inserted in a jack. Without the output resistors, there is a knob position which can short the output directly to 9V, where the current would possibly only be limited by the internal resistance of the battery.

The LEDs are totally optional in case you want some indicators. I would not even worry about reverse current unless you are using a LiPo battery or something, plus an LED is not the appropriate choice of diode for that application anyway.