Hey lines! Some of you may be interested in this project I was finally able to release.

Schräg is an expanded repackage of the Bastl Cinnamon multimode filter, released with their permission as an open source project.

More information on the github repo: GitHub - barnabywalters/Schraeg: An 8HP eurorack multimode filter module based on the Bastl Cinnamon

The filter core works exactly as the Cinnamon, with the following new features:

With this release comes a request and an offer:

The released board layout is the second revision, with various small issues from the first run I ordered fixed. The DRCs pass, but I haven’t yet ordered or built the latest version, and am unlikely to do so myself in the near future as I already have spare boards from the first run, don’t need 20 Schrägs and am not interested in selling built modules. So if anyone out there likes the concept and wants to order and test a run of the new boards, I’d greatly appreciate feedback and would be happy to help with the process.

And the offer: Update: all the spare boards are claimed now.

This is really cool, thanks for sharing!
Nice to see that you’re using Kicad. It will be cool to open up your design and explore it a bit; I recently learned how to use it and have been wanting to look at other peoples eurorack designs.

I actually also recently did a SMD rework, in this case of the Bastl Kompas module (thank you for the open designs Bastl folks!). I’ve been meaning to share my work and your post motivated me to clean up the resources. I figure here is a relevant enough place. It can be found at ~philomates/kompas - sourcehut git. 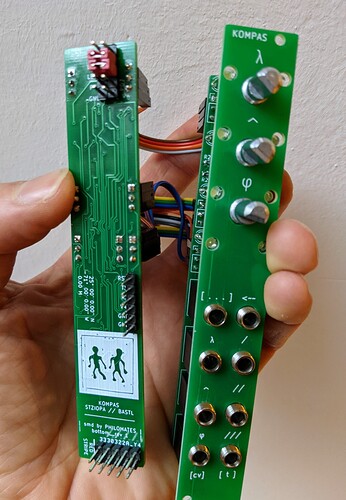 kompas_prototype2620×3786 1.1 MB
Here is a shot of an early prototype with a quick panel cobbled together.

The Kompas is a pretty versatile little module: 3 pots, 3 CV in, 2 gate in, and 3 gate out. I’ve been having fun writing alternative firmware, like a windowed comparator and a probabilistic latch/burst generator, all of which are also in that linked repository. It can also run firmwares written for the Grains Ginko Synthese, so basic sound generation stuff is possible, though there isn’t PWM smoothing filter in the kompas.

Hardware-wise I adapted the original design a bit to expose serial pins. With this I was able to use this module as the basis for some other designs, like a Befaco Muxlicer clone that includes capacitive touch buttons for selecting the step and sequencer mode.

Cool! The expansion possibilities with the serial port sound very interesting. Does your module’s logic board just sort of hang off the module on cables, or is that a temporary measure?

I’ve always been a bit surprised that so many open source synth and electronics projects use Eagle rather than KiCAD. KiCAD has its annoyances but as far as I can tell is comparatively capable, and doesn’t force you to have an account and internet connection to use it.

I’m no electrical engineer, and wouldn’t recommend treating my boards as a good example of… anything, really, but I’ve learned all the essentials like managing hierarchical schematics, making custom footprints etc. The one big KiCAD tip I can give is to check out the Interactive HTML BOM plugin. IMO that alone makes KiCAD worth using for DIY/open source projects.

good to see bastl’s modules
i made a few bastl modules via point to point soldering. 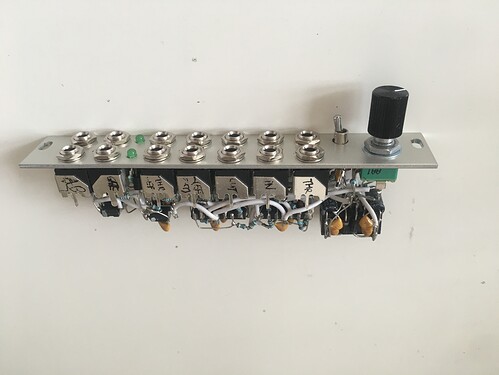 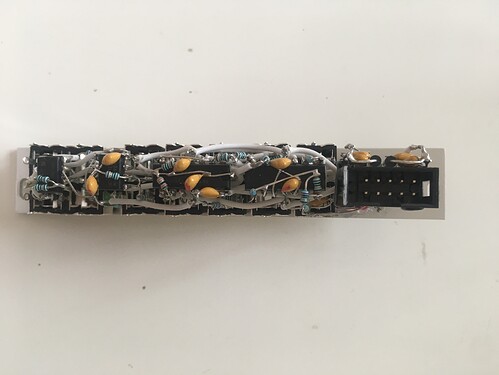 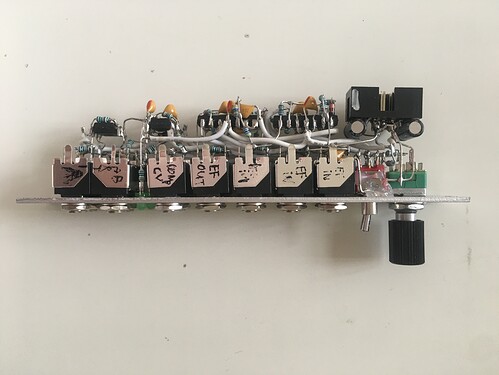 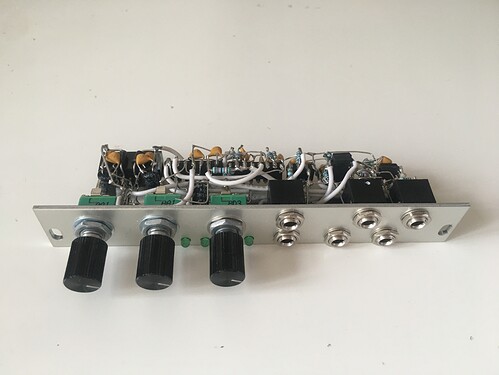 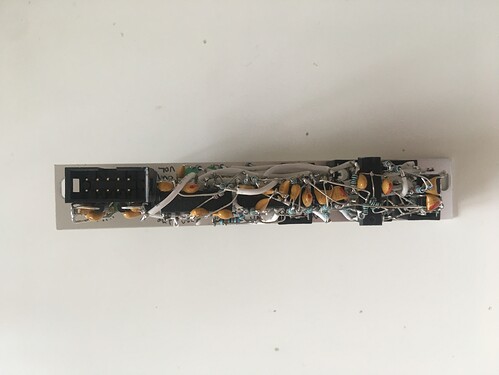 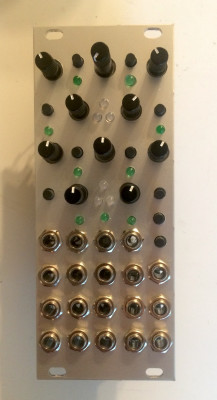 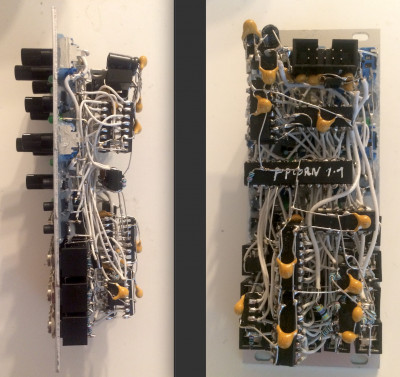 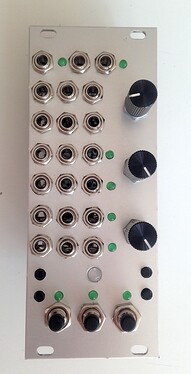 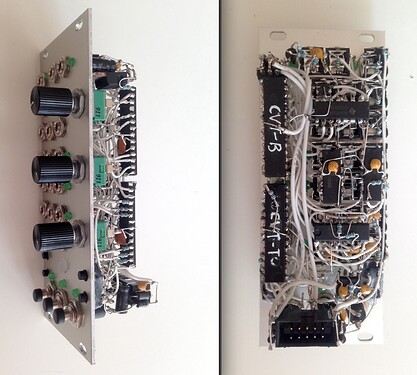 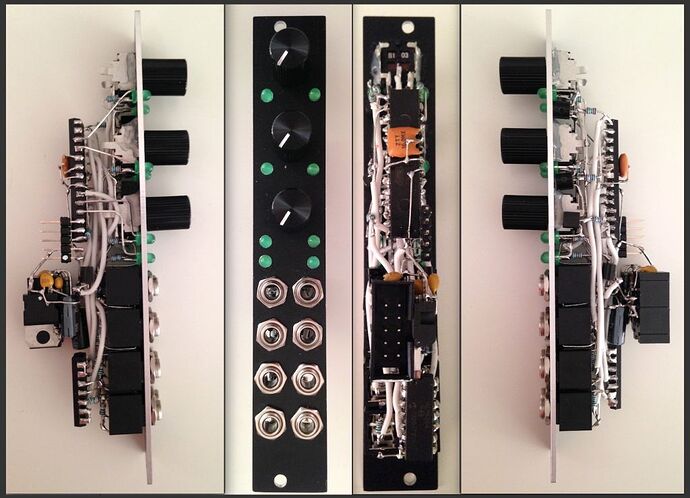 no fotos, but also made propust 2HP.
always thanks bastl instruments for open-source schema and supports.

yeah, it is a bit of a mess, but fine for prototyping 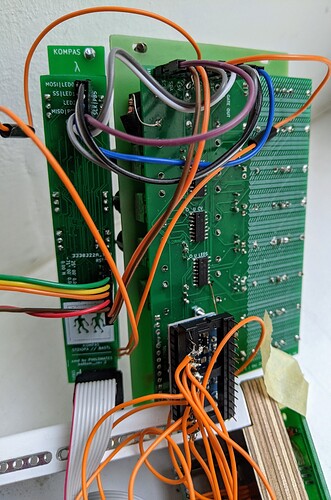 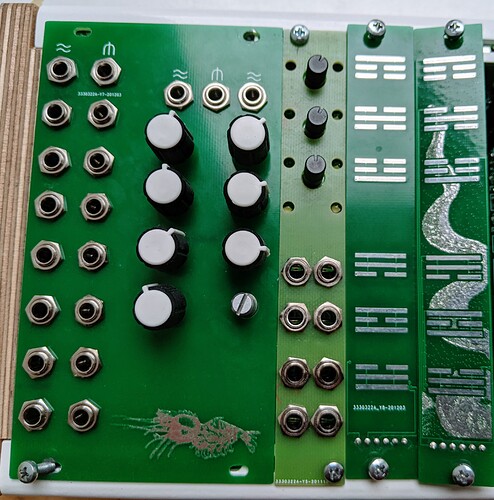 Thanks barnaby, it’s arrived and built. 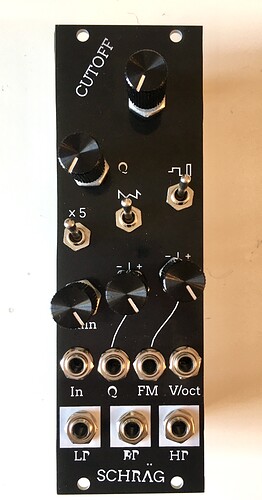 But the V_OCT_IN works well. close to open. 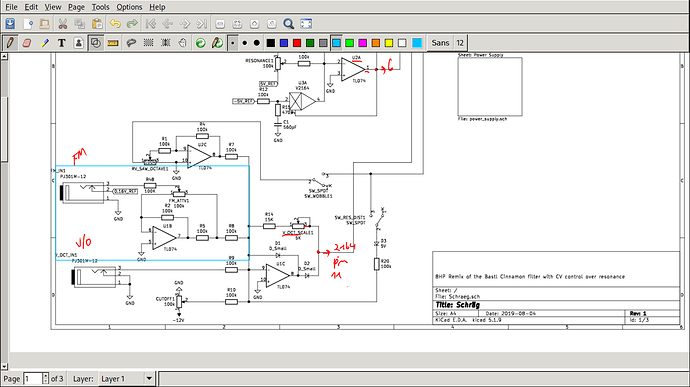 I think the filter core is exactly same with cinnamon. Only U1B(Freq), U1A(Q) part is different. 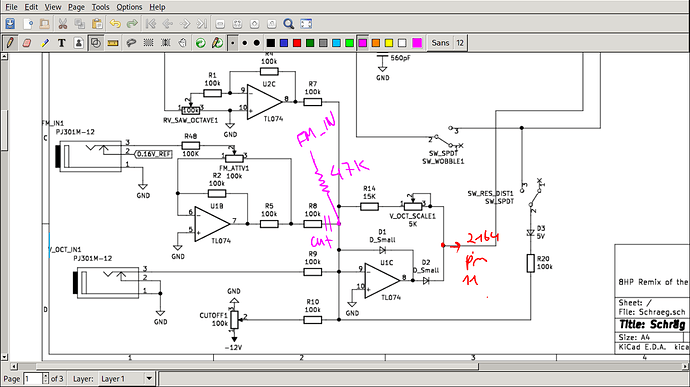 Is any guide to debug it? What could be mistake?
Thanks in advance. 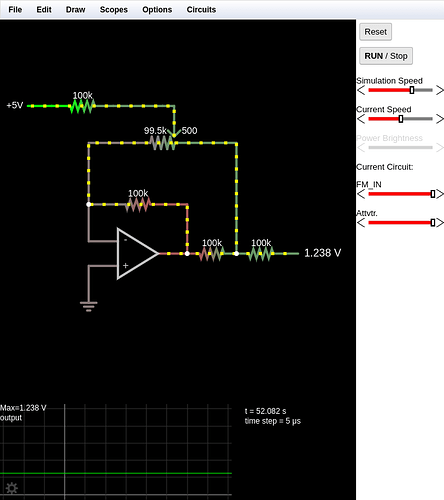 I changed the potentiometer to 1M and R8 to 0 Ohm, then little to 2V. But still not open the Cutoff.

no orientation silkscreen for IC, Diode

Yeah, this is an issue with KiCAD’s default silkscreens. There are orientation marks, they’re just very small and hard to see. I’ll improve the footprints on future boards.

Yep, that’s one of the mistakes I made on this run of boards — I did mention it in the build guide though.

To be perfectly honest, I don’t entirely understand the attenuverter circuit, and didn’t get around to analysing it yet. I’m off the grid for a few days but will experiment with it when I get back next week and see if I can figure out how to increase the range — it should just be a matter of swapping some component values around.

I poked around in a simulator and it looks like a couple of component substitutions could improve things:

With a 5V input, that gives 0V near the middle of the range, 4.5V out at the top range and -4.5V at the bottom of the range of the attenuverter: 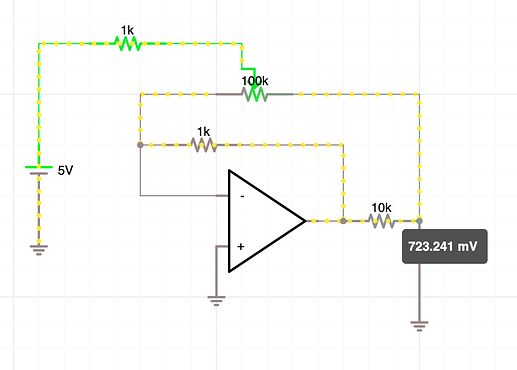 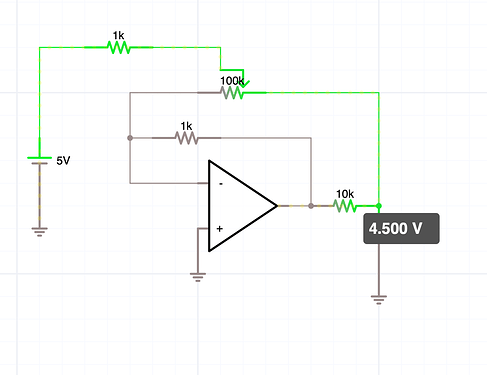 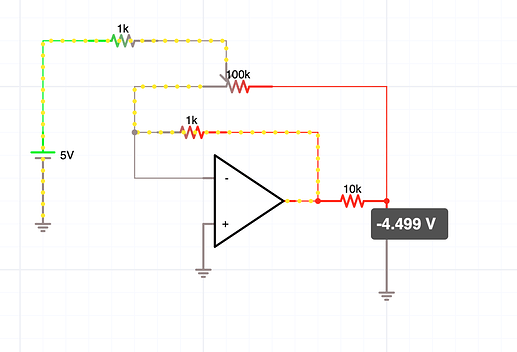 I’ll try it out on my own Schräg when I get back. If you have time to try it on your own, let me know how it goes!

Yep, that’s one of the mistakes I made on this run of boards — I did mention it in the build guide though.

To be perfectly honest, I don’t entirely understand the attenuverter circuit, and didn’t get around to analysing it yet. I’m off the grid for a few days but will experiment with it when I get back next week and see if I can figure out how to increase the range — it should just be a matter of swapping some component values around.

Until now I changed only R48, to 47k, 10k, 1k, 470R. will try to you prescription. Thanks!
I think also, swapping some value should be okay. But if it fails, always it could be direct with attenuator to 47k like in cinnamon, but without attenuverter function.

But if it fails, always it could be direct with attenuator to 47k like in cinnamon, but without attenuverter function.

Yes, that’s true, you could build it both ways, and for FM it wouldn’t make a lot of difference. I like having the attenuverter as I don’t have a lot of sources of negative modulation in my rack.

A circuit from Befaco dual attenuverter 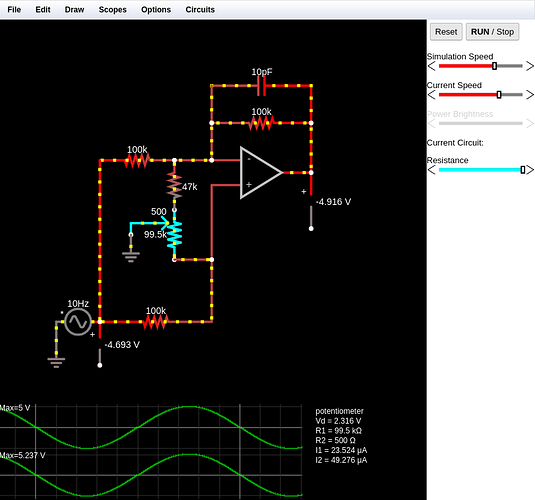 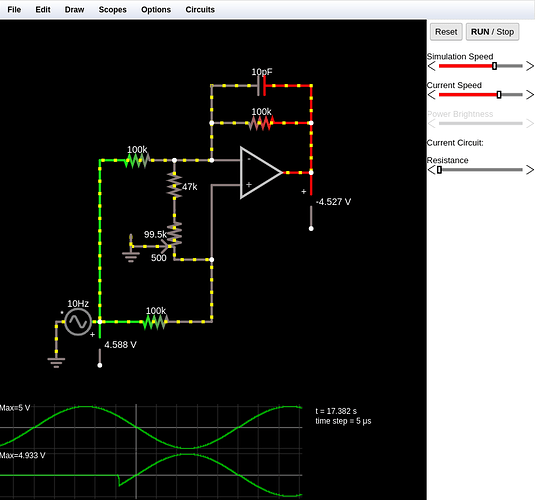 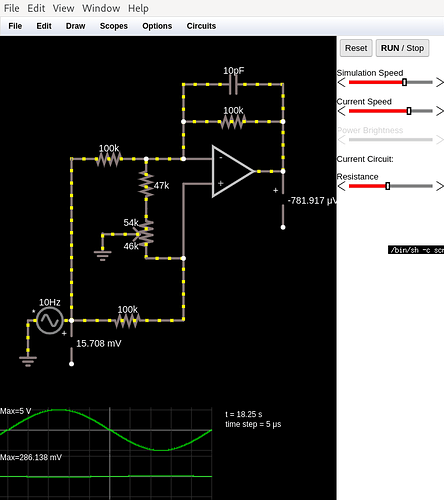 but need to cut the trace. 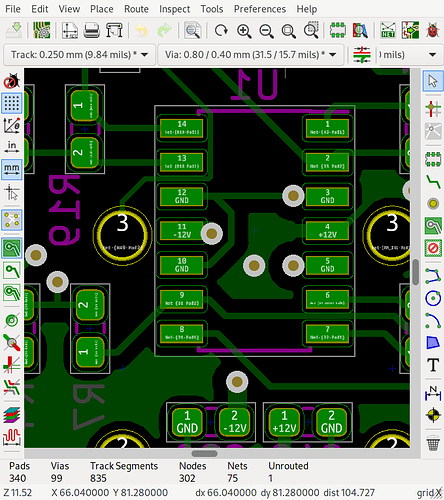 Wow, trace is under the IC. pin 3, pin 5 muss be cutted from GND.
Maybe, it is better to desolder two pins and lift up to float over the PCB. 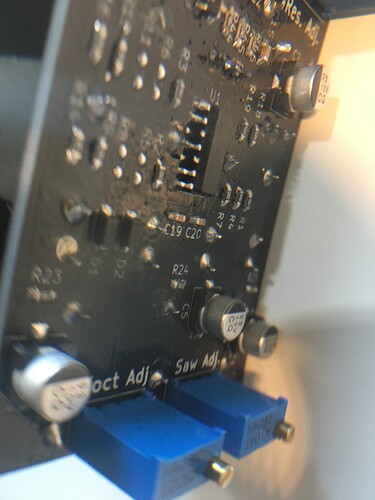 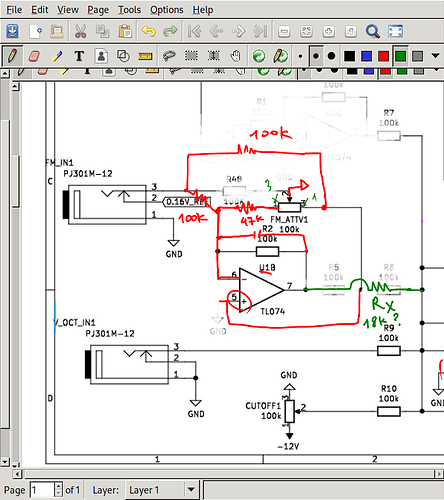 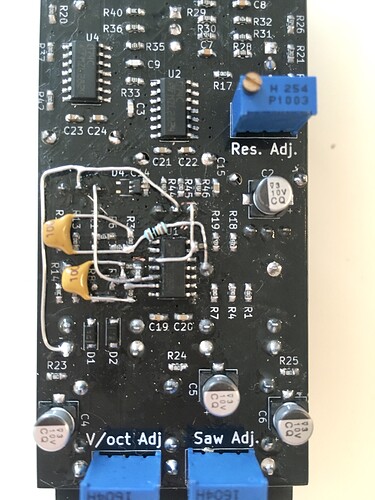 Any update on when these fixes will be implemented or tested?

I see the Schraeg pcb &panel at pusherman it say v.0.2 in photo. But don’t know it is fixed version or not.

I’m curious about this as well.

I had some of the most recent boards of this made (they have the missing resistor pads added back and the updated diode footprint), put two together with the resistor value changes suggested in this thread, one is working perfectly and the other has a weird issue that I just cannot track down.

After a certain amount of time - sometimes a few seconds, sometimes a few minutes - the cutoff goes fully open. I can fix it by turning the cutoff knob all the way down, after which the cutoff works properly again, and the cycle repeats. I have CV coming in on both the FM and V/O jacks when it happens, I don’t know if that’s related or coincidence.

I have retouched every solder joint that could possibly be affecting the circuit and it still pops up. I want to say U1 might be bad, that’s the TL074 that deals with cutoff, but I’m not sure if that’s it or not. It’s just so weird that it’s only affecting one of the two that I made.

Hey guys, Been basically dreaming of a cinnamon with a q cv input. so thanks for the amazing development.
wanted to check in what’s going on with this?
TIA

Huh, that sounds like a weird problem. I can’t think of what could be causing that off the top of my head, but maybe it sounds familiar to someone with more circuit debugging experience than me. Does the cutoff jump open suddenly, or is it gradual?

I see the Schraeg pcb &panel at pusherman it say v.0.2 in photo. But don’t know it is fixed version or not.

There are currently two versions of the board in the wild, v0.2.0 and v0.2.1, which fixes the LM4040 pad layout. Phil definitely knows about 0.2.1, but I don’t know exactly which boards are in stock at pusherman — presumably still 0.2.0.

Hey guys, Been basically dreaming of a cinnamon with a q cv input. so thanks for the amazing development.
wanted to check in what’s going on with this?

Any update on when these fixes will be implemented or tested?

Unfortunately I don’t currently have much time to work on making changes to Schräg, much as I would like to. I do get a tiny commission from the pusherman sales, but nowhere near enough to fund new board revisions. The main issue is with the attenuverter, which isn’t perfect, but works well enough that I didn’t even notice the problem! So I can’t promise that I’ll be able to produce a v0.3.0 in the near future.

I’ll probably get back to doing some more electronics work for my main job at some point next year, which would be a good opportunity to get a new revision of Schräg done while I’m in “electronics mode”. Until then, the module works pretty well, and if anyone’s not happy with the attenuverter function even with the zero-effort component substitutions, then @gnsk kindly documented their fix very thoroughly, which should be enough to recreate it.

I think there is a relation between whatever is going on and the fact that I can’t get the filter to stay in self-oscillation. For one, the frequency is really high no matter where the frequency knob is (I have a working Schrag that gets pretty low in pitch), and it can go into self oscillation but then suddenly cuts out. It’s almost like a computer crashing or something. It suddenly acts like the resonance is not in the circuit. Maybe a chip is failing, I dunno.

I know this is an old topic, but maybe someone is still following this.

I changed R5 into a 1k version as suggested by @barnaby and now the FM CV response is much better. However what strikes me as odd is that in my version the filter is always resonating to a certain extent and it is not responding to a signal present at the RES_CV1, not responding when I turn RES_ATTV1 or RESONANCE1 pot. It seems that whatever the circuit connected to U2A is doing, this has no effect on the resonance at all. Also the RES_ADJ1 has no effect not decoupling U4D by desoldering R40. All of U1A, U2B, U2A, U2D, U4C, U4D seem to be responding to their input signals (before you ask, yes all these circuit parts have power), but the resonance controls do not have an effect. But in the mean while there is always some audible resonance. So the filter itself is already resonating. When I disconnect R34 this stops and the filter works like a filter without resonance.

Any ideas? Can anyone explain what the function of U3A is?

I’ve found the cause of the problems. In my PCB-design (I’m using thru hole components for the most part) there were a few links between components missing. This made the BW of the filter always have a small value, hence the continuous resonance. The controls are now responding as they should. I’m still puzzled by U3A’s goal though. Anyone?