My understanding of how the SC works is that it has to know when the platter is being touched and to what degree it has been slowed down/sped up/changed direction otherwise the scratch movements wouldn’t work. Something as basic as a drag or a slur wouldn’t be possible if that wasn’t the case. I know Andy initially worked on a load of different prototypes before settling on the final setup. Along the way he looked at how the Tascam TTM unit worked to register platter movement and an early thought was to do the same thing but mount it underneath the platter rather than sitting on top of it.

Assemble the jogwheel – glue the bearing into the hole in the top plate of the enclosure. Now glue the magnet to the tip of the M8 bolt. Attach the jogwheel to the bearing using the bolt/nut/washer. Solder a wire to the outside of the bearing to act as a capacitive touch sensor.

This video also shows the insides of the unit better than any other I’ve seen so far, which may be of use: 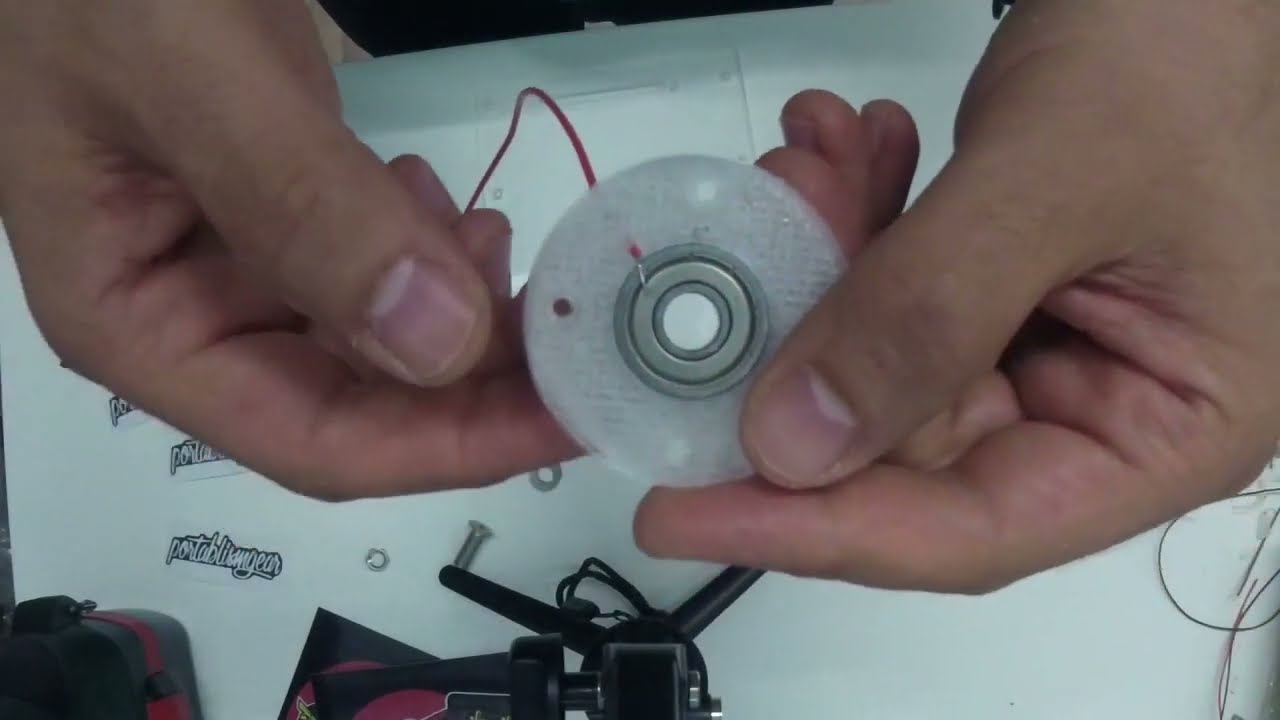 My understanding of how the SC works is that it has to know when the platter is being touched and to what degree it has been slowed down/sped up/changed direction otherwise the scratch movements wouldn’t work.

Yeah sorry. I mean that it can tell rotations during that, but when you let go it just plays as normal.

It’s really awesome seeing what people do with 3d printing and this stuff. Some of the vids for the SC mods on the FB thing were great.

I’m thinking about taking the plunge into modular or semi-modular and looking at DIY projects. Has anyone had any experience with the ericasynths bassline DIY module? It looks like its enough in a single module to be useful on its own although its a lot of work to build.

Are there any alternatives I should look at or am I better off looking at individual and simpler to build VCO/VCA/VCF modules (I’m comfortable with soldering and have done the SMD for a norns)?

I had a 60Knobs for a minute a few months ago
Easy build and very useful, 60 CC controls for Elektron boxes was great. Mapping was a pain but once it was setup it was a joy.

The dealbreakers were mostly based on the design and the quality of components.

The small Bastl pots are a little toy like. Probably only way to offer something like this at a reasonable price!

The full sized MIDI DIN was convenient but made the unit far taller than needed. The inside of the case was mostly wasted space. How everything was mounted on the board made me a bit nervous plugging in MIDI, felt like I would snap off the connector eventually. Also powering a midi controller via a wallwart in the era of USB everything was a bummer.

I had some visions of modifying it and had wired up some low profile DIN jacks for panel mounting but eventually just put it all back together and passed it on.

I think they could make a V2 with 3.5mm TRS midi and have a nice looking low profile controller.

For the $$ I’d build a 16n Pusherman has the PCB and Panels for a reasonable price. One of the best pieces of gear I have owned and kicked off my whole lines adventure.

Quick question. What you you think about adding some nice knobs to the pots? Wound that change it much for you?

I was looking at some knob toppers for the pots but they would still be plastic shaft tall trimmers. 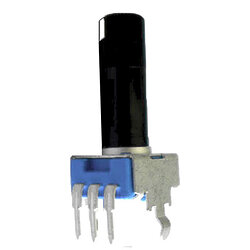 Adding 60 additional knob toppers was going to cost a bunch without changing the quality of the pots.

I use two Bleached now and they work / feel great

17 and Four-N are other options and I’m sure there would be folks here interested in any extra PCBs from an order.

What device are you looking to use the controller for?

Oh awesome. If I were to replace these what would you recommend? I just purchased the 60 knobs… but am ok doing some upgrades and using the cheep pots for something down the line.

I really really like the zlob modular diy designs (zlob sells them in full kit form, but I diy other things so buy components separately). His pictoral build guide is very helpful for a “my first diy” and you’ll learn a bit about the components too. The SVF is fantastic as a filter! The Diode Chaos is really useful as a modulator for other modules’ parameters (including the SVF). I haven’t built or used his oscillators, though…

As far as I’m aware the Song Heui tall trimmer pots are used in many Euro DIY builds and can withstand more turns than the metal alpha pots. Yes they are toy like and perhaps not as tactile as a metal alpha pot with a custom knob of choice, but they are durable.

Kind of a funky question, but does anyone know what kind of guitar pickups/manufacturers are likely to have pole pieces that have threading coming out of the bottom of the pickup?

I’ve got a random shit humbucker here that has that, and I’m looking for a couple more to try making something where I use the pickup pole pieces as momentary/switch connectors, and I think that will be significantly easier to do if the threading goes all the way to the bottom.

I think I have some conductive paint/adhesive somewhere, so I can always do something like that instead, to attach a wire to each pole piece, but I don’t think that would hold too well.

I’ve been scouring ebay for random/used pickups, but most don’t have pictures of the bottom of the pickups (why would they?). So wondering if there’s some kind of specific style/type that tends to do this (i.e. Invader, Rickenbacker, etc…) 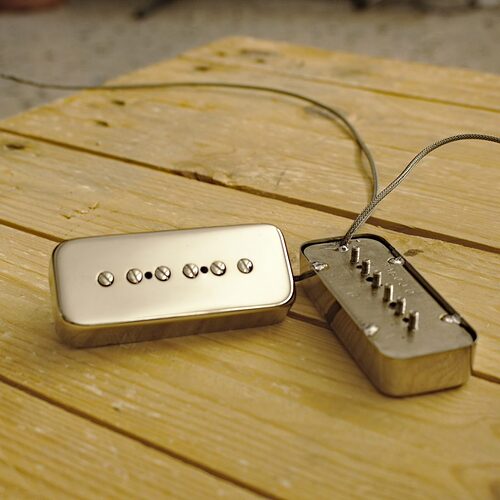 Tip: Small plastic pots, like those Song Huei ones, are easily damaged during soldering, so make sure to check the datasheet first. For example, the Song Huei R0904N datasheet lists the maximum soldering temperature as 300 degrees Celsius for 3 seconds.

For the sake of posterity/searching in the future, I ended up buying these off eBay since they were quite cheap and will test/experiment when they arrive. 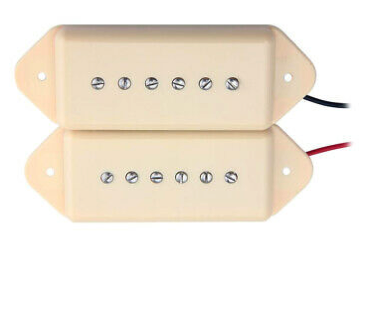 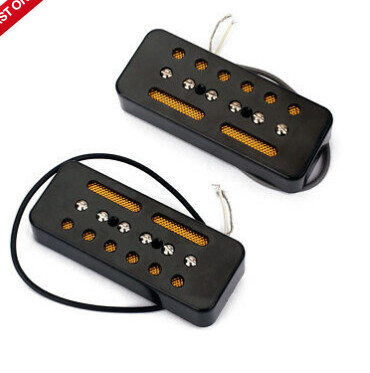 New diy multi-synth project brewing, and thought I’d share a good source for hook up wire I recently found. usually I scrounge my wire, but the project will need a fair amount of wire–high roller here.

A rainbow of colors!

heyy all, aside from a benjolin/rung divisions does anyone know of a rungler circuit that one could build?

I thought rungler was exclusive to Benjolin (as in, not a generic element existing beyond that context). Looking it up, it seems as though that is correct. Moreover it is quite a specific thing and any other instances would presumably follow the same design. You could extend it by using longer shift registers (different IC or chaining), or put more bits into the DAC, but my suspicion is other versions will be basically the same circuit.

Specifically, it looks like a hysteretic comparator (with an extra feedback element) feeding a regular 8 step shift register. That has an external clock input and the last 3 stages feed a standard resistor ladder+opamp summer D to A. It has a fixed feedback from the final output to the input which sums with the input. In benjolin it’s fed from the output of oscillator 1, with a switch to add in an offset voltage from a pot. The second oscillator’s output clocks the shift register. To use it without these two elements you therefore need to add a clock source (intended to be audio rate, e.g a square wave VCO, perhaps a Schmidt register+pot or V/Oct tracking one) to replace the input from oscillator 2 (clock) or an external input, through a comparator with an adjustable reference voltage, to allow you to turn arbitrary audio rate signals into squares (hysteretic would be an asset). The oscillator one input could be a jack (similar to the clock I described), driven be another internal oscillator, or by a switchable noise source.

I guess my observation is the “rungler” in itself is quite simple, but how you’d build a module around it depends on what you want it to do. Benjolin is the canonical example but it would be fairly easy to come up with many variations on that theme. I suspect breadboarding it and trying out several configurations would be the best way to find a design that feels useful. In particular, conceiving of them in the abstract, given the core of the circuit, it’s quite hard to visualise (or audiate) the result.

If you stretch it far enough, Wiard Noise Ring (non DIY) and Music Thing Turing Machine (DIY) are in the same family - a shift register with a clock and signal input + a simple D-A converter to generate the output voltages from the shift register + some kind of control for either holding the contents of the register or writing new bits based on input signal.

There is a ciat lonbarde paper circuit called Rungling over in the CL thread and you can make it on paper or PCB. I’m not sure if it’s just a rungler or if it also includes a few oscillators or something as I haven’t buit mine yet, but it might have what you are looking for.

Kind of a funky question, but does anyone know what kind of guitar pickups/manufacturers are likely to have pole pieces that have threading coming out of the bottom of the pickup?

So I finally got around to testing with the shit P90-style pickups I got off ebay and I can’t seem to solder to the protruding screws out of the bottom.

I ordered two different types. Here are closeups of the bottom: 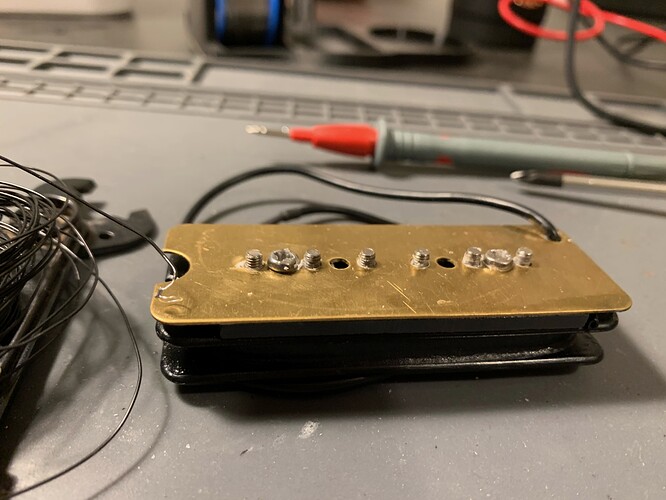 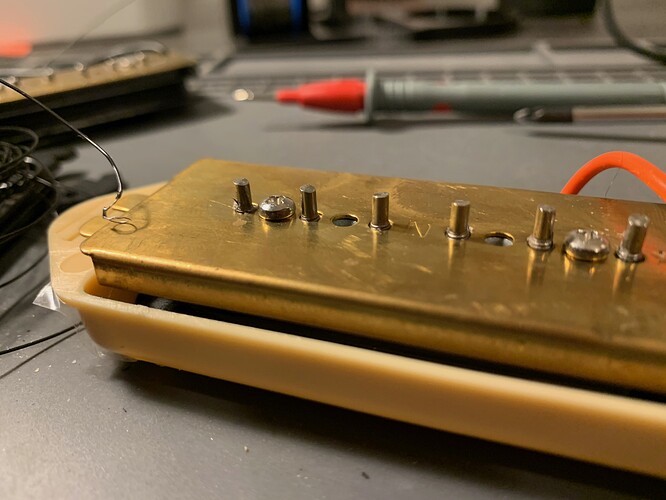 I was initially hopeful that the threading on the black pickup would be enough to screw a couple thing bolts onto there to clamp wire down that way. They are way too short, even when screwed “down” as far as is reasonable.

I tried soldering some thin gauge wire to it, but I couldn’t get it to stick at all, and then I started worrying about hitting the Curie temperature since the poles are supposed to be magnetic.

The more cream colored ones protrude quite a bit more, but don’t have much to hold on to.

In the past I’ve done some dodgy work with conductive adhesive/paint, but that seems a bit janky in general.

I also thought some kind of speaker terminal things might work, with just a friction/mechanical connection. It’s cutting it a bit close as I want to keep the wires electrically isolated from the brass base plate, so I can’t push them down too far.

Anyone have any thoughts/suggestions on how to attach wires to these?

(the intended use will be a mini guitar-esque percussive instrument which also doubles as a 6x6 switch matrix(ish) thing so that as you press the individual strings to the poles, you close connections on a breakout board. so my intention here is to be able to run wires from the bottom of the poles to the rest of the hardware)

I often find it difficult to solder to contacts with shiny chrome plating, but it’s much easier when it’s abraded or removed. Try a little sandpaper or a abrasive tool with a Dremel type rotary tool and the solder might take.

I still worry about demagnetizing the poles though.