i came to realization that my current music making process has a lot in common with DJ style mixing. i typically use renoise with 4 drum tracks (each track containing multiple drums), with a filter on each. there are other tracks but this is the main foundation. i have faderfox mx12 controller set up with faders controlling volume of each track, and 2 knobs in each column are mapped to filters’ cutoff and resonance.

one thing this doesn’t achieve is being able to control different bands separately. and it would be really nice to have both EQ and filter for each track which means adding another MIDI controller.

i’m thinking of replacing this with a 4 channel DJ mixer and curious to hear from people who use similar setups, as well as opinions on various DJ mixers and different techniques, for the purpose of producing music specifically.

The crew from Circle of Live, whose amazing long-duration multi-genre improv shows sit kind of at the intersection of live production and DJing, talked about their setup at a workshop following their performance at Mutek this year. The core of their setup is two six-channel PLAYdifferently Model1 mixers, which might be a great fit for your use case. They’re spendy, unfortunately.

If you’re using software wouldn’t a 4midiloop be a better choice?

If you want both EQ and filters per channel, there aren’t that many options that I’m aware of: the DJM-750 and 900, which are digital, and the Rane MP2015. If you can live with less EQ or filters, there are a few more choices that come to mind: The model-1, which has great filters but only one band of (sweepable) eq, the A&H Xone 92 has 4 band eq but just two assignable filters, the DB:4 which can toggle between EQ or filters but not both at the same time.

Out of all of the the DJM-750 is the cheapest option, the rest are all fairly expensive, and unless you’re mixing disparate sources, you might be better off getting a more fully featured midi controller, like a Livid DS1.

I picked an A&H Xone 43 for general studio duties because it is a DJ-style mixer with an effects bus, and not too expensive. On each channel you get filter or stereo effects send, which is a tradeoff that works for me.

The crew from Circle of Live

thank you, will check it out! and yeah, i looked at model1 but for my purposes it doesn’t seem to offer anything compared to similar models to justify the price (although 6 channels is nice!).

wouldn’t a 4midiloop be a better choice?

i don’t think it’s still made? but yeah, still considering a MIDI controller / software option, something like one or more xone:k2 or similar controllers.

If you want both EQ and filters per channel, there aren’t that many options that I’m aware of

this would be more of a “nice to have” than “must have” but yeah, mp2015 looks really tempting, especially considering USB audio integration which would work great for my setup. thank you for the detailed breakdown, super helpful!

how does a&h lineup compare to denon and pioneer?

Yeah the xone:k2 is a very sensible controller option, CoL also used those, and I’ve been thinking about picking one up myself.

I love DJ mixers for noise and improvised music because of how performative they are. I have a DJ mixer dedicated to feedback mixing. Certain turntablism techniques translate to the crossfader use, although the resulting sounds are completely different.

how does a&h lineup compare to denon and pioneer?

I’m only really familiar with the pioneer DJMs and the A&H XONE:92, as they’re fairly ubiquitous in clubs (never seen a denon in the wild). My takeaways:

DJM series: Digital, 4 channels, 3 band EQ, 1 multi-effect, 1 AUX send, and 1 “Color” effect per channel which can be the filter but something else. The early versions suffered from poor sound quality and limited control, but recent versions are much better. Shines when using with laptop or CDJ players.

Regarding the Model 1, I got a chance to play on one and the quality is definitely a cut above the A&H and Pioneers. It sounds better and the attention to detail is very high. But it’s definitely not easy on the wallet.

Kind coming at this from a different approach but I use this cheap iPad DJ mixing app at the beginning of my signal chain and then run that through layers of modular weirdness. It’s nice to bring in different tones with control over the mix, filter, eq and the ability to loop sections on the iPad to not take up a eurorack sampler.

I’ve recently dug my Vestax 05 pro III out of storage to use as a sub mix buss for my iPads, partially because I needed more ins but also because it offers 2 send/return effects which adds a whole extra dimension of control over performances 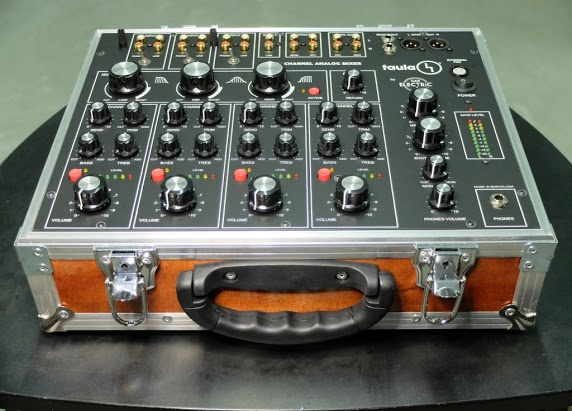 I haven’t tried it yet but I was thinking the other day about how good a DJ mixer would be for use with send effects.
You could control the effects input dynamically with the crossfader and you could use the cue channel as another effects send, switching between effects on the fly.

It looks like several people beat me to it.

did quite a bit of reading and decided to go with xone:96. i looked at pretty much every 4 channel dj mixer available, including all the wonderful boutique ones (taula, condesa etc) and my final choices were superstereo DN44 or DN48, xone:96 and xone:db4.

having a built in audio interface became one of the factors - this way i can use it with a laptop, and it just streamlines the whole set up so much. so this narrowed it down quite a bit. superstereo DN44/48 is very tempting but there isn’t much info about it (yet?).

rane mp2015 was tempting for having both filters and EQs on each channel (and i like how it distills what’s important) but too pricey, so compared to A&H features it was hard to justify. was surprised to find it’s actually digital.

so at the end it came down to A&H for the combination of sound and features. considered db4 - it’s really nice to be able to switch between EQ/isolators/filters, but i have no need for the loopers, so they would just get in the way. and while it’s nice to have effects i was afraid it would become too much of a “flip through every preset” distraction.

so, had a first play with xone:96 (never used 92 before either). it does get really hot, as reported. super nice to have 4 band EQs and somehow it’s more immediate to glue tracks together compared to a regular mixer (i’ve got mixwizard for that purpose). there is also distortion on each filter which could be useful but then it ties a whole filter, and you’re already limited to 2.

what’s really great for music production specifically is that you get all 4 tracks sent to USB, plus SEND1 and either SEND2 or master. you also get 2 extra channels with their own EQs and faders which could be used for returns or something else, and 2 more channels with their own gain controls that can be routed to master - so it’s really a 10 stereo channel mixer, although you can “only” multitrack 6 channels via USB.

also not to make it all about expensive mixers - i’d love to see examples of using cheap dj mixers/controllers for music production, like interesting examples of using them for controlling non dj software. and i imagine they could be fun for hacking too!

I’m thinking of changing the audio system I have for live performances and studio recording, and I don’t know which way to go. My “music” is mainly sound experimentation with field recordings (manipulated and triggered from an Octatrack), noise, Serge modular system, MS-20, … etc and effects pedals. I was using the Octatrack as a mixing center before, but I’m not very happy with the sound. I just took it out as a generator and now use a Mackie mixer. The fact is that I’m not very happy either. I would like to be able to manipulate the audio signals, to be able to mute them, to play with the sends to filters, … etc, and to be able to have a better sound quality in the chain for all this to be able to record it on the fly. Let’s say I want something for live, but also with enough quality to record everything on an external Zoom or to my Mac.

I have seen DJ decks like the Xone 96, and I wanted to know if its use would be interesting in my work process or can I have better options. I’m looking for something portable and that I can take out of the studio for live shows, but I don’t know if these types of tables outside the world of techno will be appropriate … Any advice?
Thanks!

I recommend trying one out. I bought a Xone DB4 after stumbling onto Dave Mech’s YouTube videos and it has become an essential instrument when performing live and composing. I love that I can make soundscapes out of nothing with it, record separate stereo tracks into the computer, and it is very intuitive. The downsides are that it is expensive and the drivers are not compatible with the latest macOS. I use the A&H external midi controller to control loop lengths and wet/dry. I enjoy the built in delays with auto sensing BPM which work pretty well.

I typically use iPads as sources. Sometimes FM radios, noisemakers, contact mics on acoustic percussion and kalimbas. Lots of options out there.

I’m saving up for a Condesa Carmen V.

Years ago during my college mobile DJ days, I used a DJM800 in my home studio. The filters are great and audio quality is top notch. These mixers are made to sound nice and clear on giant festival systems, fully balanced XLR final outputs.

The production closet at my job was recently cleaned out and I was gifted all of our old broken gear, including an old DJM800. Slowly upgrading and repairing a bunch of it. Luckily the only big issue was a stuck and nasty channel fader, so I am working the mixer into my current modular / Norns setup.

A friend of mine is the engineer for Dave Sitek (TV On The Radio, lots of production credits) and he still uses a DJM800 in the studio. He has a really performative way of producing where he jams for hours and then my friend edits it down.